Is fracking ban ‘a lie’?

Our environment and future existence are on a knife edge with climate change. In this critical election our only hope is a Labour Government. This could be our last chance.

‘The Conservatives announced a Moratorium on Fracking in an attempt to pick up marginal seats in areas where Fracking is unpopular.

’The biggest fracker in the UK’

‘The Conservatives used a so-called fracking moratorium to try and election-fix. But INEOS has just let the cat out of the bag by confirming they are continuing their quest to be the biggest fracker in the UK by posting their new injunction notices around their sites in Woodsetts on Thursday 05 December 2019 (see image, right).

‘INEOS, owned by the notorious tax exile Jim Ratcliffe, and one of the Conservative party’s largest donors, seeks to profit from his petrochemicals plastics empire by using the fracked gas to turn into millions of tonnes of more disposable plastic.

‘Jim Ratcliffe has an absolute disdain for members of the British public and just couldn’t wait till after the Conservatives’ fracking election lie to show it by reposting fracking injunction notices last week in Woodsetts just in time for Christmas.

‘The Conservatives’ fracking moratorium or ban as reported in the media is clearly just a Team Johnson hoax to simply pause fracking and take it off the agenda for the election. There are over 40 marginal constituencies where fracking is a major local issue.

‘The Conservatives defined fracking in the infrastructure act as a process using 10,000 m3 of fluid. If you use a bucketful less than that, according to the small print, it’s not fracking! If you used these same criteria for the US fracking industry, 89% of all the fracked oil wells would not be considered fracking. 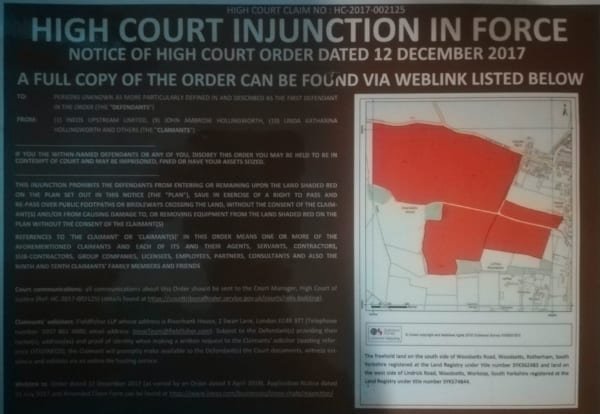 ‘There are also other nasties like acid fracking and acid matrixing that are not covered at all. The moratorium is a farce.

‘Both Labour and the Lib Dems have promised to ban fracking for good.

‘Team Johnson have tried to perform a conjuring trick with fracking and they are taking us all for fools. Fracking isn’t finished – it’s just taken an election holiday.’

Click here to read our article about the secret fracking report.