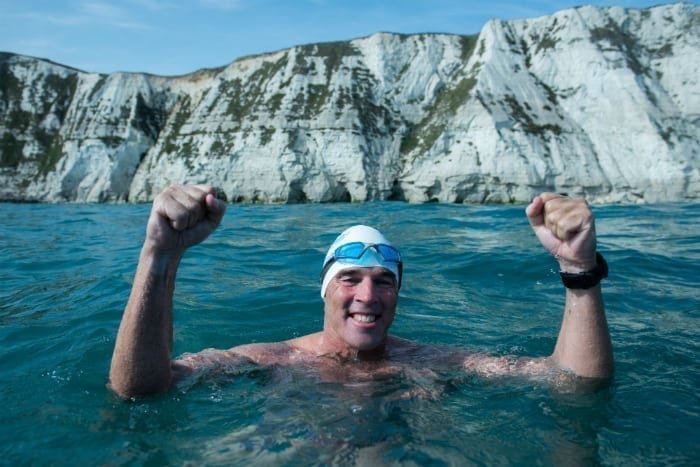 UN Patron of the Oceans completes The Long Swim at Shakespeare Beach, Dover

Lewis Pugh, the UN Patron of the Oceans and renowned endurance swimmer, has completed his latest and most demanding swimming challenge, The Long Swim.

Lewis swam the entirety of the Channel wearing just a pair of Speedo swimming trunks, a cap and goggles. On completion yesterday (29 August), Lewis became the first person to swim the length of the Channel in accordance with Channel Swimming Association rules, who were on hand in Dover to validate the swim.

Lewis started The Long Swim at Land’s End in Cornwall on Thursday 12 July, and swam an average of 10km for 50 days. Poor weather conditions and changes in the tide stopped Lewis swimming at all on some days, meaning he carried out a number of additional swims in the middle of the night to make up time, often swimming up to three times per day.

Lewis took on The Long Swim challenge to raise awareness of three distinct environmental issues: plastic pollution in the oceans, commercial overfishing and the impact of climate change.

Following the completion of the swim, Lewis now heads to Westminster for a series of meetings with key environmental figures at Whitehall. The Secretary of State for the Environment, Michael Gove was present in Dover to congratulate Lewis on his challenge and to talk to him about his concerns around current UK policy.

Lewis Pugh is the only person to have completed a long-distance swim in every ocean of the world. Over the past 30 years, Lewis has pioneered swims in the most challenging environments on Earth, including the Antarctic, the North Pole and the Himalayas. He has campaigned on behalf of the world’s last pristine marine wilderness areas and The Long Swim was Plymouth-born Lewis’ opportunity to bring his message home.

‘During The Long Swim, I saw plastic on picturesque Cornish beaches and found party balloons five miles off the coast at Brighton and saw countless other examples of the impact of climate change and human behaviour on UK waters. If the British Government doesn’t do more to protect our coastline, it will be our generation, not futures ones, who see the true impact of inaction on their coastline.’

LEWIS PUGH
Endurance swimmer and UN Patron of the Oceans

Speaking from Shakespeare Beach, following the final swim into the Kent town, Lewis said,’Completing The Long Swim is my biggest achievement in all of the years I have been swimming and campaigning for ocean issues. But I see this as just the start – we now need to see urgent action from the British Government to protect the seas along the UK coastline.’

Surfers Against Sewage, one of the UK’s leading marine conservation charities, is a partner in The Long Swim and hosted regular beach clean-ups involving members of the local community throughout The Long Swim. Lewis took part in beach cleans in Penzance, Portsmouth, Brighton and will take part in a similar event in Dover before heading to London.

Discussing the importance of the UK Government taking urgent action, Lewis said, ‘Only 7 square kilometres out of a total of 750,000 square kilometres of the UK’s waters are fully protected and that is frankly shocking. The amount of protected water amounts to a mere one-hundred-thousandth of all UK waters and this cannot continue. The British Government must protect the UK coastline properly by introducing fully protected Marine Protected Areas.’

Click here for more about the report that reveals just 13% of the world’s oceans can be classified as ‘wilderness’.