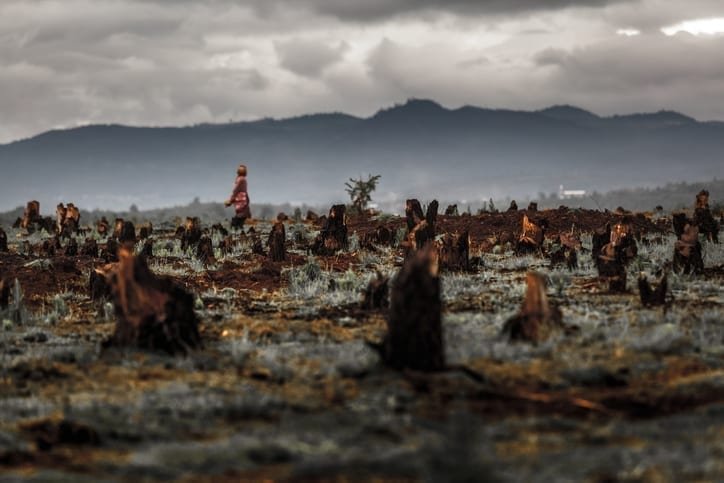 ‘The loss of biodiversity and the degradation of nature is equally important as human-induced climate change’. That’s what Sir Bob Watson, formerly head of the UN climate body the IPCC who now heads up its sister organisation the Intergovernmental Panel for Biodiversity and Ecosystem services (IPBES), told Unearthed in a new interview.

He made the comments as part of a new series by Greenpeace’s digital journalism project. The series – Life Support – comes ahead of what Watson has called ‘the most comprehensive assessment on the state of nature and humanity’s place in it’ – and the first to involve governments from around the world who are gathering in Paris this week to discuss it.

It will investigate key risks from an ecological collapse including the impact on food production, protection from natural disasters and further fuelling climate change.

Interviews with the experts

The series includes extracts from interviews with leading scientists and commentators including:

IPBES chair Sir Bob Watson: ‘Since the 1992 Earth Summit in Rio, we’ve largely wasted 25 years arguing with these subjects rather than dealing with them. And each of the issues – loss of biodiversity, climate change and others like land degradation – have all got worse in those 25 years.’

The lead author of the most up-to-date assessment about the dependency of global food production on insect and animal pollination, Dr Alexandra-Maria Klein from the University of Freiburg. Asked what insects declines could mean for the future of the human species, she told Unearthed: ‘It’s hard to say because I don’t know what’s happening in the future and how much genome editing we have or how much other solutions we have, but at the moment I would say without insects we will not survive for a very long time… But don’t think about pollinators, think about soils organisms and all these functions that are in the soil. When we don’t have the insects or the organisms there, then the soils are not functioning any more. And then we have a really intensive agricultural landscape, without any organisms in the soil, any organisms above soil. It will not function at one point, and then it is not possible to produce any crops.’

Dr Anna Belcher from the British Antarctic Survey, who highlights the need to protect ocean ecosystems which play a role in carbon sequestration: ‘It’s one big system. We’ve got to consider it from the surface to the seabed so any pressures that we mentioned like fishing and mining we have to understand – so before we go and tamper with these systems we need to understand how sustainable they are in terms of the numbers and the biodiversity but also in terms of how much carbon they might take up.’

Dr Lynn Dicks, a leading sustainable agriculture ecologist at the University of East Anglia. Referring to a German study published in October 2017, she warns that: ‘If you have a 75% decline over that period of time, that rate of decline cannot go on. If that is really happening everywhere and is not an anomaly of that particular place, then we really are facing a crisis, and we need to do something about that which is extremely urgent.’

Prof Daniel Pauly, one of the world’s most cited fisheries scientists, warned that the development of a deep sea mining industry ‘cannot be sustainable because they [the nodules at the bottom of the ocean] take millions of years to grow.’ He told Unearthed: There is going to be a triangle of mud raining down – if there is no current – on organisms that do not have the mechanisms to free themselves… These organisms at the bottom of the deep ocean cannot handle having a rain of mud on them. So they will desertify an entire landscape. Coral reefs for example cannot handle mud falling on them. They can handle some impurities but they cannot handle a rain of mud.’

Other scientists included in the series include:

Prof Sebsebe Demissew, professor of plant systematics and biodiversity at Addis Ababa University, the first African foreign member of the Royal Society and a member of IPBES’ management committee for the latest assessment.

Dr Harindra Joseph Fernando, an engineer who specialises in the movement of water at the University of Notre Dame who did groundbreaking work on the protective role of coral reefs in the 2004 tsunami.

As scientists gathered in Paris, four videos were released last week on Tuesday, Wednesday, Thursday and Friday – with a long-read feature on Monday to coincide with the release of the IBES report.

Click here to find out more about the value of nature.