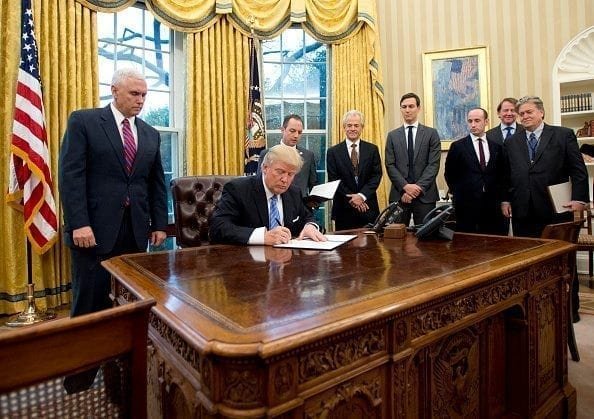 If the new US president wants to keep his promise to ‘make America great again,’ then he should follow the example of the late British premier Margaret Thatcher on climate change, according to a group of UK and US respiratory doctors writing in an editorial published in the international journal Thorax.

By doing so, Donald Trump – a self-confessed admirer of Mrs Thatcher – would not only leave a lasting legacy for the good of the planet, but would also give a huge boost to the nation’s health and finances, they argue.

‘Responding directly to the threat of climate change will require innovation and global leadership. Action now is crucial if we are to protect the health of our people now and in future generations.’

Recognising the magnitude of the threat posed by the growing hole in the Earth’s ozone layer in the mid-1980s, Margaret Thatcher threw her weight behind international efforts to ban chlorofluorocarbons (CFCs) used in refrigeration and aerosol sprays.

She worked with the then US president, Ronald Reagan, to secure the Montreal Protocol which phased out the manufacture and use of these chemicals in 1987.

Although it will take until 2060 before the ozone layer fully recovers, without this decisive action the world would already be 3ºC warmer, say the authors.

And this, combined with increased levels of radiation, would have left much of the planet uninhabitable by the middle of this century, they insist.

‘A similar challenge faces us now. Rising temperatures and disrupted ecosystems as a result of climate change increase the risk of vector borne diseases, such as malaria, and crop failure; and boost exposure to harmful algae/pollen/moulds and the effects of air pollution—now the third leading cause of death worldwide after high blood pressure and smoking.’

These consequences disproportionately exact a heavy toll on those who already have heart and lung conditions, and the poor, they say – and there is no doubt that limiting climate change now will cost far less than tackling its consequences in the future.

The authors have a suggested ‘to-do’ list for the new president:

‘There is a practical and moral imperative to take action now to reduce current and future impacts of climate change. These actions have the potential also to improve health and prosperity directly.

‘If Trump wants America to lead, then he needs to be at the front of the international climate change pack, not at the back. No one else will be quitting the race onwards to the betterment of their peoples.’

Click here to read the full editorial, ‘Climate change and lung health — a challenge for a new President’.