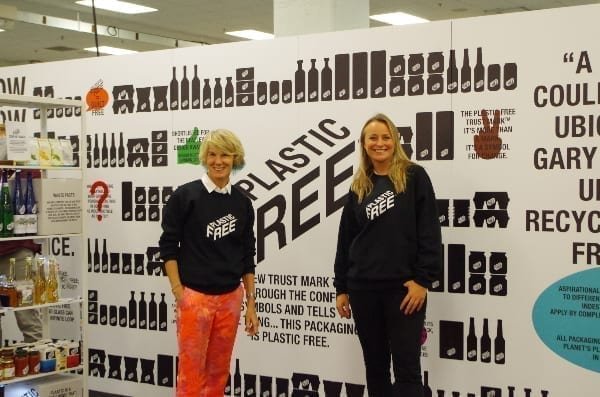 Campaigners are aiming to touch the lives of one billion people as part of One Plastic Free Day on 05 June this year.

International campaign group A Plastic Planet is aiming to inspire people across the world to participate in one of the biggest visual surveys ever conducted on the plastic crisis.

As part of an international day of action that will coincide with World Environment Day, the One Plastic Free Day logo is set to be projected at a host of iconic global sights including Times Square in New York.

It could be your biro, your drinks bottle, your trainers, your magazine wrapping, your carpet, or your toothbrush.

It might be a bunch of bananas in a pointless plastic bag. Or a plastic drinks stirrer that remains useful for a matter of seconds yet remains on the Earth for ever.

The photos will form the basis of an interactive world map at oneplasticfreeday.com.

Following 05 June the comprehensive global results will be published as part of a landmark visual report into the frustration caused by unnecessary plastic across the Americas, Asia, Europe, Africa and Australasia.

The major new visual report is set to shed new light on the extent of the global plastic crisis, identifying hotspots around the world where decisive change is most needed.

One Plastic Free Day is also set to see governments and big business make their own plastic reduction pledges.

Last year a quarter of a billion people joined together to create the world’s first One Plastic Free Day. From the litter-choked beaches of Indonesia and India to the waste-crammed landfills of New York and London, people united in a simple cause – to ignite and inspire the world to turn off the plastic tap.

Campaigners believe One Plastic Free Day 2019 could touch the lives of up to a billion people.

One Plastic Free Day is backed by high-profile figures including Hollywood stars, athletes and leading campaigners.

‘One Plastic Free Day 2019 belongs to the world. It is not about any single organisation or individual. From Lagos to London, Phuket to Paris, it’s about people coming together to gather vital intelligence on the true extent of the plastic crisis.

‘So far there have been too many words and not enough action. June 5 is the time for everyone to join together to show industry and governments that we, the public, have had enough. We don’t want to be part of the plastic pollution problem any longer – Every time we shop we feel guilty. Why is it taking so long for change to happen?

‘I’m incredibly excited about the prospect of mobilising one billion people for the brighter plastic-free future we all know is possible.’

Globally some eight million pieces of plastic pollution find their way into our oceans every day. Around the world, one million plastic drinking bottles are purchased every minute, while up to five trillion single-use plastic bags are used worldwide every year.

The level of microplastic pollution on land is thought to be up to 23 times the level of contamination in global oceans.

Click here to find out more about One Plastic Free Day 2019.