Organic drinks are more popular than ever, but do they cost more, do they still give you a hangover – and are they made from carrots? 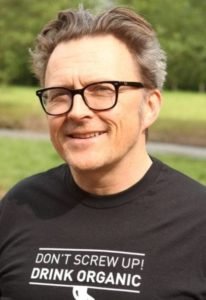 It took a ‘formative’ three-month road trip through France for Neil Palmer and Lance Pigott, co-founders of Vintage Roots, to realise they might have a future in organic wine.

The following year Neil packed a tent, a few neatly folded maps and a ‘worryingly short’ list of organic vineyard addresses for a return trip in his old Citroen 2CV. ‘We set off to the Loire Valley and Bordeaux areas to meet some inspiring organic growers’, Neil remembers – and the rest, as they say, is history.

During the trip Neil and Lance saw the devastation that intensive chemical farming left behind. When they set up the now award-winning organic drinks supplier Vintage Roots, they did so with the clear intention they’d only ever sell organic products.

Today we’re all aware of the benefits of organic, but back in the 1980s things were a bit different. ‘Our commitment to organic was treated with a lot of scepticism’, Neil recalls. ‘People would ask ‘is it made from carrots?’ We travelled the country trying to explain the real benefits.’

Various ‘organic certification bodies’ existed in the mid-‘80s, many of which have since disappeared. The rules are stricter now: anyone selling organic wine requires certification, meaning consumers can buy with confidence.

Following a surge in demand there are currently thousands of certified organic wine growers all round the world. Many of the bigger drinks companies also carry a range of organic wines to satisfy the booming demand, so competition is really ramping up. ‘We have brilliant relationships with some of the world’s best organic producers and only stock the best quality and great value’, Neil says. ‘After all, we want to promote organic in the best possible light.’

Click here to find out which Vintage Roots wines are MyGreenPod.com Heroes

The range at Vintage Roots often follows what’s popular in the wider drinks market, with prosecco and malbec from Argentina currently selling well. Vintage Roots’ own-brand wines are also popular – particularly the sauvignon blanc, merlot, rosé and prosecco in its Wild Thing range. These wines were developed, selected and designed in association with the Born Free Foundation in 2010. Since then, tens of thousands of pounds have been raised through sales to benefit conservation and animal welfare.

The range has expanded every year and is currently well over 400. You can browse wines by colour, region or category, and explore vegan, vegetarian, biodynamic, no or low sulphur, Fairtrade, low alcohol and award-winning options. ‘Back in the early ‘90s we took on the first organic beer, which was soon followed by ciders and then spirits, too’, Neil adds.

The growing demand for organic drinks is being supported by a wider shift towards more conscious consumerism. ‘There’s never just one reason to switch to organic’, Neil tells us. ‘It’s more a mixture of health, quality, environmental benefit and provenance.’ Non-organic drinks can be produced using a list of nasty-sounding treatments and scary names; Neil assures us that some of these are completely harmless – though others are less so, or the jury’s out. Of more importance, in Neil’s opinion, are the pesticide residues that could lurk in your glass: ‘even in tiny quantities, would you want to ingest them?’, Neil asks. ‘Some wines are fi ned or cleared using animal products, too, which many vegans and vegetarians don’t realise’, he adds.

Though organic wine is just as alcoholic as its conventional counterpart, anecdotal evidence suggests you’ll be left with less of a fuzzy head the morning after – particularly if you’re sensitive to sulphur or some of the other chemicals in wine.

Besides the hope of being left with a kinder hangover, organic quality is superior, and you know that by purchasing organic you’re helping a grower somewhere protect our planet from damaging toxic chemicals. And with prices as low as £7.65 for an organic tinto and £8.50 for a delicious-looking organic prosecco, the prices are just as tempting as the drinks themselves.

Click here to view the full range of organic and biodynamic wines from Vintage Roots.