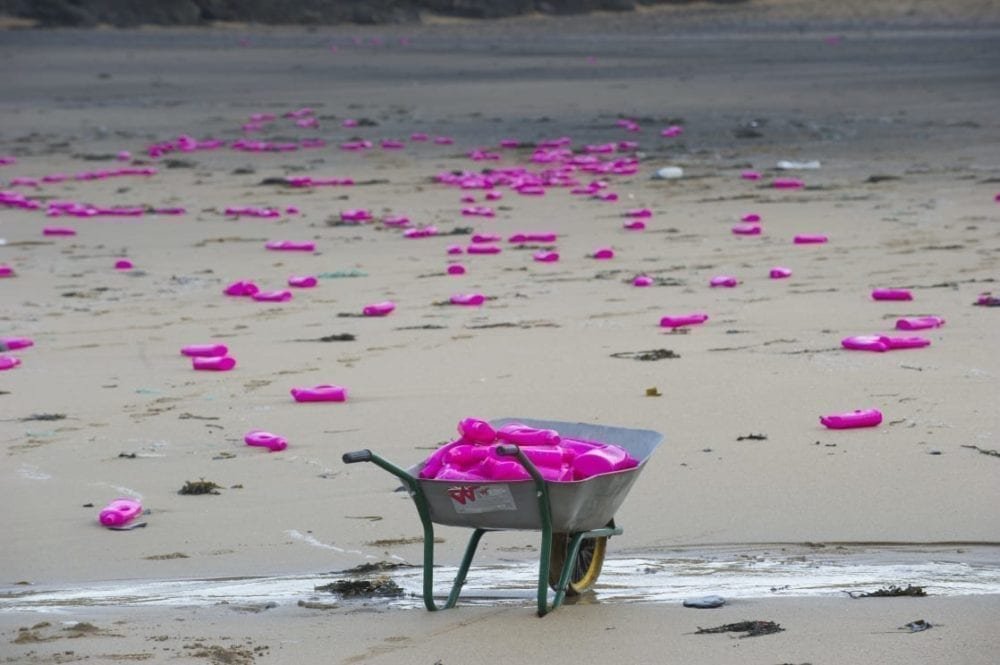 This week, thousands of bright pink detergent bottles washed onto Poldhu beach on the Lizard Peninsula, part of the West Cornwall coastline that’s cared for by the National Trust.

The National Trust was alerted to the bottles on Monday, and staff and volunteers – including those from the Friends of Poldhu Community Group – started collecting them straight away.

‘We are urging people to not to pick up any bottles without using protective gloves, to keep animals away, and to avoid swimming or walking in the area until any risk from the detergent to human or animal health has been assessed.’ The National Trust is the biggest coastal landowner in the country, and looks after a third of the Cornish coast. It has been working with other agencies and Cornwall County Council’s emergency response team to manage the situation.

‘More than two tonnes worth of bottles have been collected so far, however there is potential for more of the bottles to spread further up and down the coast. Samples of bottles have been submitted for independent analysis and are waiting for the results, as our immediate concern is any impact on the environment and wildlife.

‘We have been in contact with potential manufacturers of the bottles about the clean-up and will be investigating the source of where the bottles have come from.’

Litter in our seas

The National Trust estimates that there are two pieces of litter for every footstep you take on a beach.

The tide of litter on our beaches sadly appears to be on the increase; quantities of litter on UK beaches have more than doubled since 1994. It’s estimated that over 100,000 marine animals die every year from entanglement or ingestion of items discarded on our beaches or at sea.

The impacts of concentrated amounts of detergents on Cornwall’s important marine and coastal wildlife are deeply worrying.

The government is being urged to implement a national marine litter action plan to address the main sources of litter in the UK’s seas from the public, fishing, shipping and sewage-related debris. Click here to find out how you can help with National Trust beach cleans.