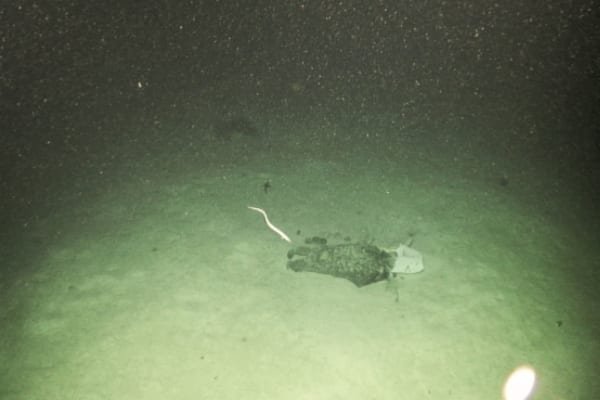 It’s no secret that the world’s oceans are swimming with plastic debris —but the reach of human plastic waste is as deep as 2,125m, even 320km offshore, a UCC-led expedition has revealed.

Scientists from University College Cork (UCC) in Ireland have discovered plastic at the bottom of a deep submarine canyon at 2,125m water depth while investigating cold-water coral habitats.

UCC’s Marine Geology Research group has been investigating cold-water coral habitats in the Porcupine Bank Canyon, some 320km due west of Dingle, on a research expedition led by UCC’s Dr Aaron Lim on board the Marine Institute’s RV Celtic Explorer.

The monitoring stations record the speed, temperatures and direction of the currents around these habitats as well as trapping samples of the food, sediments and microplastics being deposited around the corals to understand conditions down there and how the corals are coping with changing oceans.

The researchers found plastic in the bottom of the canyon — deep enough that you could stack 10 Eiffel Towers inside — at a water depth of 2,125m. The reach of human plastic waste is down this deep, even 320km offshore.

‘It’s always sad to see plastic rubbish in these otherwise pristine habitats. It quite incredible that our plastic waste can get this far out and so deep in the oceans’, said UCC Professor Andy Wheeler, who has pioneered research on cold-water coral mound offshore Ireland over the past 20 years.

‘I don’t think people think about this when that dump their rubbish’, he added. ‘We’re also trying to see if microplastics are being fed to the corals from above. We’ve just got the samples, let’s hope we’re wrong.’

The Porcupine Bank Canyon is teeming with a whole range of cold-water coral habitats, just on Ireland’s doorstep, according to Dr Lim.

‘The environment is much more dynamic than we thought’, Dr Lim said; ‘with two of the monitoring stations knocked over by the currents, food supply for the coral is variable but the corals are doing OK. Some of these habitats have existed for millions of years and have grown so large they resemble hills made of coral, called coral mounds.’

This is the first time eight of these monitoring stations have been deployed and collected using the ROV Holland 1. It will provide scientists with an insight into the processes affecting these habitats, the food they are eating and the volume of microplastics that impact them.

Ireland hosts cold-water coral reefs in the cold, dark ocean at water depths of 600m to 1,000m along its continental margin. ‘Not only is this expedition vital for understanding these habitats and our impact upon them, but it also acts as a baseline to start monitoring how our deep-water habitats here are changing’, added Dr Lim.

The team has a research agenda that will see them return to the canyon and other habitats for a number of years to monitor the changes in the environment around these habitats. The monitoring stations will be brought back to UCC for detailed analyses.

‘It’s great that Ireland now has the technological capacity to undertake surveys in the deep seas and answer questions not just for Ireland but also vital to understand our planet’s health’, commented Paddy O’Driscoll, ROV Holland I superintendent.

This research survey is carried out with the support of the Marine Institute, funded under the Marine Research Programme 2014-2020 by the Irish Government. The research is being funded by Science Foundation Ireland, Geological Survey Ireland and University College Cork.

Click here to read our article about the microplastics found in every UK river tested.