In a powerfully connected world, here’s a way to shield yourself from electromagnetic radiation 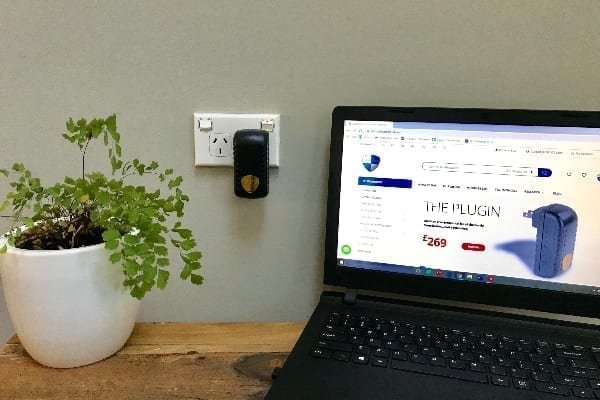 There are pros and cons to living in an increasingly connected and high-tech world – but the radiation emitted by the tech we use every day is something we could all do without.

You can get away from your router or smartphone, but emissions from other wireless or mains-powered products – such as cell towers and wifi in the office or from the neighbours – is harder to escape.

Electromagnetic radiation (EMR) is a form of energy that’s organised on a spectrum and calculated in Hertz (Hz). It spans a vast range of wavelengths and frequencies; at one end of the spectrum there are long waves with short frequencies like the EMR from a standard power outlet. At the opposite end are short waves with very high frequencies, like X-rays and gamma rays.

Sunlight is an example of naturally occurring electromagnetic radiation, but our dependence on electricity and ever-advancing technologies means our exposure to manmade electromagnetic fields (EMF) has increased to levels millions of times higher than the natural levels of EMF our bodies have evolved with.

EMR AND THE HUMAN BODY

Constant frequencies like a wifi signal and other sources of EMR can aggravate your body and cells. Prolonged exposure to these frequencies starts to irritate the sympathetic nervous system, which in turn interferes with electrical impulses of the body, affecting cellular communication.

Because EMR affects us at a cellular level, it can cause DNA damage, affect the blood-brain barrier and increase calcium levels in our cells. Research suggests that this can lead to serious health risks including cardiac problems, cancer, sleep disruption, infertility and neurodegenerative disease.

EMR is like a foreign frequency to our bodies, causing it to produce an immune response. Symptoms can differ from person to person depending on individual sensitivity and the level of EMF exposure, but they commonly include nausea, headaches, fatigue, tinnitus, dizziness, poor sleep, skin rashes and heart palpitations.

Whether you feel you are sensitive to it or not, everyone is affected by electromagnetic radiation – though infants, children and pregnant women are most at risk.

GETTING AWAY FROM IT ALL

It’s a challenge to entirely remove ourselves from electromagnetic fields. Smart meters, wifi routers and wireless devices such as mobile phones and tablets – the very fabric of today’s society – all emit high levels of electromagnetic radiation.

Some people choose to minimise their exposure by living off the grid and avoiding EMF-emitting technology and appliances. A limited number of areas – known as ‘green’ or ‘white’ zones – have been designed to be free of manmade EMF.

There are some simple steps you can take to reduce your exposure, such as turning off your wifi router when not in use – particularly at night. Mobile phones and tablets should also be turned off or switched to flight mode when not in use.

EMF exposure is reduced with distance, so keeping your mobile phone away from your head and body and not sleeping close to smart meters or power boards will help to reduce your exposure. Using ethernet cables rather than relying on wireless connectivity for your devices is also an option.

In addition to minimising your exposure to electromagnetic radiation wherever possible, you can use a Blushield device to help strengthen the immune system and allow the body to heal.

Blushield products use a symphony of natural frequencies within the human range of frequency response to protect you from the negative effects of electromagnetic radiation.

The technology does not block EMFs; instead, the devices work by emitting millions of natural scalar frequencies with which our body resonates (‘sympathetic resonance’).

By providing a stronger signal – one which our body can understand and attune to – a Blushield device enables us to ignore or override the powerful manmade EMFs, and helps to protect our body at a cellular level from its negative impacts.

Before using Blushield, blood tests show ghosting of red cell membranes due to their weakened state. The tests also show red cells bunched together and of irregular shape, as well as some parasite and crystallisation taking place in the blood. After using Blushield for three months, the red cells had stronger membranes, a more regular shape and distribution and fewer parasites.

Blushield devices help to create the right coherent environment for your body to heal. Toxins get released, more energy is made available and nutrients get delivered into the cells where they are needed.

You may feel this initially by experiencing a ‘detox’ effect when first using the device, and then by the improvement in both the physiological and bio-chemical functioning of the body.

Most people experience increased energy levels, better sleep, less stress and an overall better sense of wellbeing. Many people also notice improved clarity, focus and mental performance. Some report aches and pains disappearing, which may be due to the release of stress on the body. This normally happens within weeks of using the Blushield.

A Blushield Portable device can be used when you’re out and about so you are protected 24/7, as EMFs surround us in our daily lives. The Blushield Cube is also a useful addition to any large workplace or office as it covers a larger radius.

Scalar energy is found in nature and is therefore a frequency that our body has evolved with and can understand. By resonating or ‘tuning into’ Blushield’s natural scalar frequencies, your body can perform the way nature intended.

Click here for more about Blushield devices and how they work.