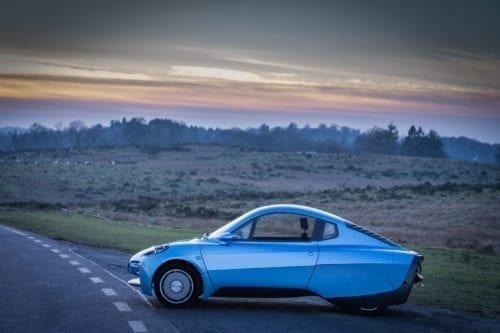 Visitors attending the first RHS Chatsworth Flower Show in Bakewell (07-11 June) could be forgiven for initially thinking a sporty little two-seater car looks out of place in a garden called ‘RHS Garden for a Changing Climate’.

But the Riversimple ‘Rasa’ is no ordinary car. It runs on hydrogen, emits no pollution and has been created by a Welsh car maker that’s revolutionising the motor industry by adopting a circular business model – promoting sustainable mobility and less waste.

‘We are delighted to be working with the RHS to help encourage discussion among visitors about ways to tackle climate change and to reduce pollution levels. These are some of the biggest problems facing our modern world. It is also exciting to see technology around green cars and infrastructure developing at such a rapid pace, offering people sustainable mobility in the near future.’

One of the garden designers, Andy Clayden said, ‘It is great to have this British design innovation in our ‘RHS Garden for a Changing Climate’. The Rasa is forward looking and emphasises sustainable use of resources, which is a key theme within the garden.’

The Rasa, which emits just water, is currently believed to be the greenest car designed for ordinary road use. It is the culmination of 15 years of research and development by a team that includes ex-F1 and aerospace engineers, and was launched in spring 2016 to huge acclaim.

It has a range of roughly 300 miles, refills in a few minutes and is powered by a small hydrogen fuel cell as well as energy recaptured from braking.

The pioneering Welsh company is the only car maker to adopt a circular economy model, aiming to recover as much value as possible at the end of the car’s life.

In April, Riversimple announced its first crowdfunding round had exceeded its target of £1m and raised a final figure of £1,138,000 to match a €2million EU grant towards running a 12-month public trial of 20 hydrogen fuel cell cars. These will be hand-built and test driven by residents in Monmouthshire, Wales. This follows a £2million grant awarded by the Welsh government in 2015.

The company plans to boost hydrogen infrastructure in the UK by developing communities of users around each filling station. Over the next 20 years, Riversimple plans to build a distributed network of compact and efficient manufacturing plants that will regenerate communities and create jobs.

The ‘RHS Garden for a Changing Climate’, designed by Andy Clayden and Dr Ross Cameron of Sheffield University and RHS Scientist Eleanor Webster, shows a small suburban garden now, next to one in the year 2100. It highlights how suburban gardens could adapt to stormier weather patterns, increased rainfall and hotter, drier summers.

RHS Chatsworth Flower Show is expected to attract more than 85,000 visitors and will be set within the 1000-acre parkland of the Chatsworth Estate, home to the Duke and Duchess of Devonshire.

Click here to find out more about the RHS Chatsworth Flower Show. More on the Riversimple Rasa is here.