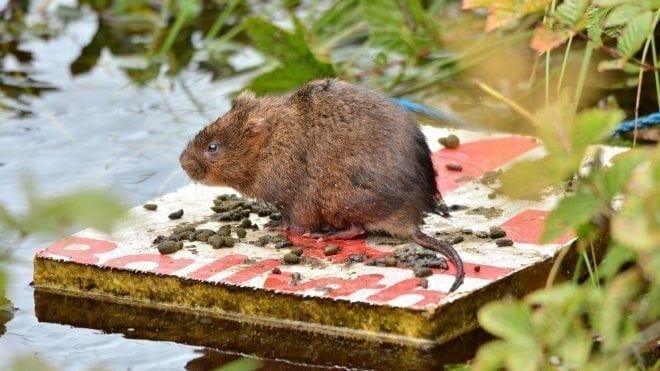 One hundred water voles were reintroduced into the National Trust’s Malham Tarn in the Yorkshire Dales at the weekend (20-21 August), in what is believed to be the highest upland water vole reintroduction project (by altitude) ever carried out in Britain.

This is the first time the endangered mammals have been seen at Malham Tarn – England’s highest freshwater lake (377m) – in 50 years.

National Trust ecologists believe Malham Tarn’s water voles were wiped out in the 1960s by mink, which escaped from fur farms nearby.

The charismatic water vole – inspiration for Ratty, hero of Kenneth Grahame’s Wind in the Willows – is Britain’s fastest-declining wild mammal. Once common, water vole numbers have dropped by almost 90% in recent years.

The National Trust is reintroducing the water voles, which have been bred in captivity, as part of its new vision for land management in the Yorkshire Dales. The conservation charity is taking a ‘Nature-first approach’ to managing the 8,000 hectares of moorland, farmland and woods that it cares for in the Yorkshire national park.

The water voles will play an important part in the ecosystem at Malham Tarn, grazing and burrowing into areas of the riverbank and providing the space for rare plants like scarce mosses and liverworts that need patches of open habitat to grow. The water voles will also act as a food source for struggling predators like barn owls and otters. ‘In the rest of Europe, water voles are common. In Britain, the creatures are incredibly rare. We know water voles have thrived at Malham Tarn in the past and thanks to work by the National Trust, the habitat here is perfect for water voles again.

‘By reintroducing water voles to the Tarn, we hope to give these rare animals the chance to recolonise the streams in the high Yorkshire Dales.’

The water voles have been specially bred for the National Trust by Derek Gow Consultancy, an ecological consultancy with 18 years’ experience working on wildlife reintroduction projects.

The release of the water voles has been staggered over five days. The animals spend two days in large cages, placed on the fringe of the tarn. On the third day the cage doors are opened. Food placed on rafts in the water encourages the voles to leave the cages and build burrows. After the fifth day the cages are removed.

‘Water voles once played an important part in the ecosystem at Malham Tarn. Reintroducing them to the Tarn is just one of the ways we are working alongside our farmers and other partners to restore wildlife and natural processes in the Yorkshire Dales landscapes we care for.’

PETER WELSH
Ecologist for the National Trust in the Yorkshire Dales

National Trust rangers will monitor the health of the water vole population over the coming years; it’s hoped the animals will recolonise the Tarn and its surrounding streams.

Click here to find out more about the National Trust’s work to protect Nature and wildlife.