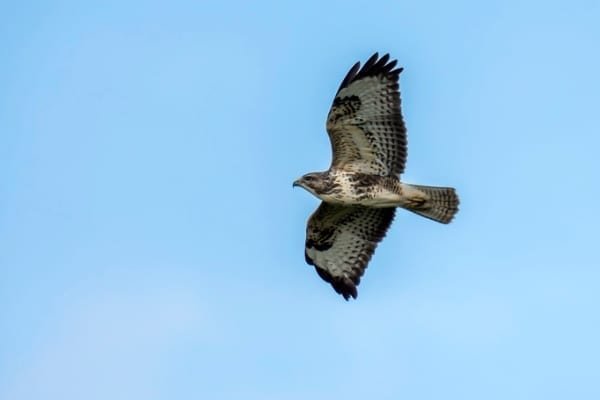 Scotland’s birds of prey continue to be at risk from illegal persecution according to the RSPB’s Birdcrime 2018 report, published today (29 August).

The minimum of 12 confirmed, detected incidents of illegal persecution that took place in Scotland during the year was more than double the number recorded in 2017.

Cases uncovered during the year included a peregrine poisoned in the Pentland Hills near Edinburgh; a buzzard found to have been shot twice in South Lanarkshire; a buzzard caught in an illegal trap in Inverness-shire and a hen harrier caught in a spring trap in Perthshire.

All of these incidents occurred on, or close to, land being managed intensively for driven grouse shooting.

’The tip of the iceberg

However, the RSPB said these incidents ‘are only the tip of the iceberg’ when it comes to crimes against raptors.

Cases where satellite-tagged birds of prey went missing under suspicious circumstances are not included in the report, because no bodies were recovered.

However, they are a further indicator that recorded crimes represent a tiny fraction of what is happening to Scotland’s iconic raptors.

Birds being tracked that went missing in 2018 included tagged golden eagle ‘Fred’, who disappeared close to a grouse moor in the Pentland Hills in January.

Similarly, four young hen harriers tagged as part of the RSPB’s Hen Harrier LIFE project were also all last recorded on grouse moors. Athena disappeared near Grantown on Spey in Inverness-shire in August; Margot on the Aberdeenshire/Moray border also in August; Stelmaria near Ballater in Aberdeenshire in early September and Heather in Glenalmond in late September.

As always, in such incidents relevant tag data were provided to the police for independent scrutiny.

The damage caused by management for driven grouse shooting is now widely recognised to extend beyond illegal bird of prey persecution. Muirburn on moorlands damages peat deposits and releases carbon dioxide into the air, contributing to climate change and exacerbating flood risks downstream.

In areas managed for driven grouse shooting Scotland’s mountain hare population has suffered greatly from unregulated culling, due to their perceived and unproven threat of disease transfer to grouse stocks.

Long term data from the eastern Highlands, and published by the Centre of Ecology and Hydrology and the RSPB in a scientific journal last year, shows there has been a 99% reduction in mountain hare numbers there since the 1950s.

In its official reporting to the European Union on the status of key species, Scottish Natural Heritage has recently been downgraded their Scottish population status to ‘unfavourable’.

The petition currently has 81,337 signatures; at 100,000 the petition will be considered for debate in Parliament.

Click here to add your name to the petition to ban driven grouse shooting.

‘Birds of prey are an integral part of Scotland’s heritage, woven into our landscapes and our history. We have international obligations to protect these birds. There is widespread revulsion amongst the Scottish public that these birds continue to suffer greatly at the hands of wildlife criminals. Our published data from Birdcrime 2018 shows that this damage is both current and significant, and reinforces why robust regulation of driven grouse shooting is urgently needed.

‘The Scottish Government has led the way in the UK by commissioning an independent review into the impacts of driven grouse shooting. This is a seminal moment and a chance for Scottish Government to tackle raptor crime by bringing grouse moor management under regulation, and giving greater recognition to the public interest in the way such sporting estates are managed. Sanctions to remove licences to shoot should be available to act as a strong deterrent to those who currently break wildlife protection laws, and engage in other damaging land management practices.’