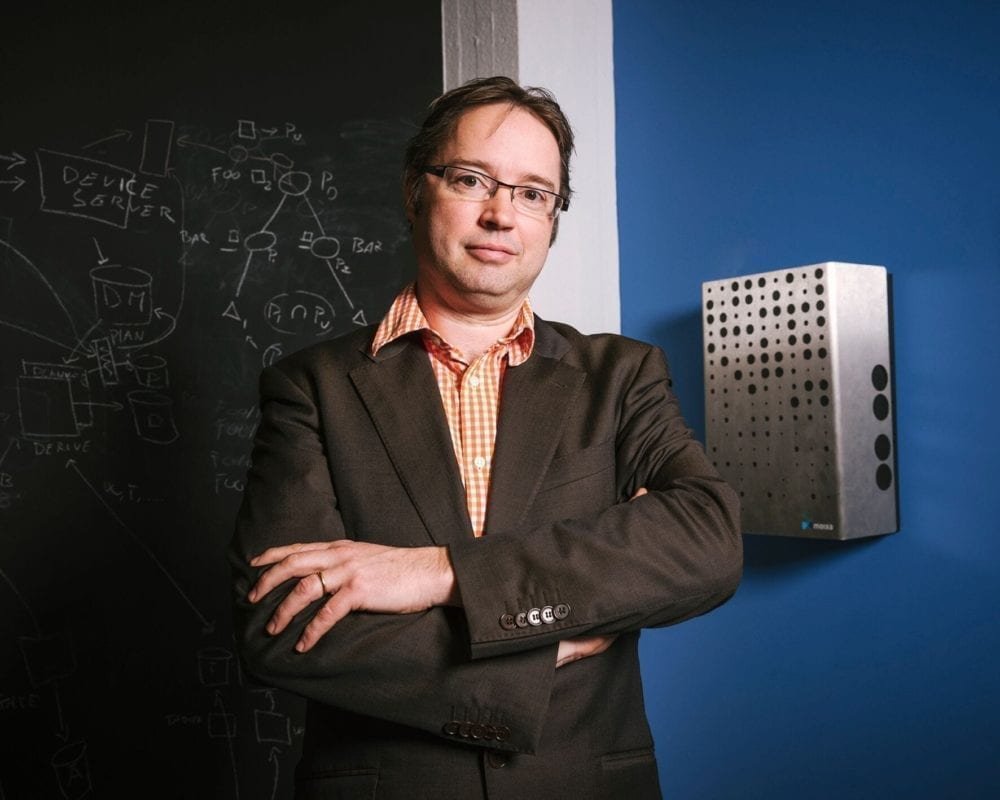 If you think solar panels are only for people with stacks of cash and an off-grid home in the country, you’d be wrong. Moixa is helping to democratise the whole sector by focusing on the mass market, urban consumer. The goal is to drive a huge shift in the way energy is generated and consumed, and the happy side-effect is that customers are typically saving around £350 a year off their energy bills.

The Moixa Smart Battery is a small unit that fits under the stairs or in the garage. It combines a 2kWh Smart Battery with a 2kWp solar PV system, so the battery can be charged directly by solar panels in the day or using cheap electricity via Economy 7 at night.

Using home-generated power topped up with cheaper electricity – while earning a guaranteed 20 years of Feed-in-Tariff payments – is generating decent financial benefits for Moixa’s customers. At the same time, peak pressure on our stretched National Grid is eased and reliance on fossil fuels is reduced, meaning Moixa has developed a truly win-win piece of technology.

But it doesn’t end there. Customers receive an extra £50 per year if they agree to make their battery available on GridShare, a service that allows Moixa batteries to be aggregated and managed as a virtual power plant. Customers with excess power stored in their batteries get a share of the profit Moixa makes by selling it back to the National Grid.

The vision is to roll this technology out to a million homes, then connect the batteries to create an intelligent collective grid service that helps lower bills even further and reduce overall system costs.

The overarching goal at Moixa has always been to transform the way energy is used; while homeowners currently do little more than pay the energy bill, Moixa sees the homes of tomorrow as partners in a distributed energy system that feeds more renewable power into the energy networks and speeds the transition to low-carbon alternatives.

One of the most interesting things about this vision for the future is the method of its delivery: co-founders Simon Daniel and Chris Wright are applying the technologies, approaches and insights delivered by the internet to the energy domain, where companies are more used to planning for a 40-year horizon. ‘Energy is now changing at the same speed at which we swap our smartphones for the latest model’, Chris tells us, ‘and we need smart, intelligent technology that enables this transition.’

The future of energy

Changes in the way we use energy in the UK mean our consumption is currently out of sync with the network that supplies it; National Grid and the government predict they’ll need to spend around £200bn on upgrading the UK’s grid infrastructure over the next two decades in order to update ageing infrastructure and accommodate further predicted changes in our energy usage.

‘The rise of energy-efficient appliances and lighting is in fact driving a drop in domestic energy consumption’, Chris tells us, ‘but there are three mega-trends that will likely disrupt this pattern.’

The first is the electrification of the transport system, which currently uses approximately one-third of the energy used by the UK. As EVs become more popular, they will radically change the pattern of electricity use. To give a sense of the scale, a typical home uses 1kW at peak times; an EV charger uses 7kW, meaning the energy stored in 10 new Nissan Leaf cars could power 1,000 homes for an hour.

The second trend is the projected electrification of heat. If heat pumps really take off – and many believe they will – they could pull the remaining major sector from gas to electricity.

Both these scenarios will require more electricity to be generated and transmitted. ‘The third mega-trend is distributed generation’, Chris tells us. ‘The grid is rapidly moving from a scenario in which all the energy was generated in large central power stations burning fossil fuels to a world where energy is generated by solar panels on people’s houses, or in the fields next door at a larger scale – or wind farms at a larger scale still. These aren’t controllable in the way a gas power station is: the sun and wind are variable. This clearly presents a challenge since the grid must be balanced between supply and demand all the time, second by second.’

In order to facilitate these future demands, we could reinforce the grid to cope with the increased load; we’d need to install more pylons, dig up the road to put in more wires and build more power stations that could power up when the wind didn’t blow. The grid has been engineered this way for the last 60 years; it’s reliable, but it’s very expensive and disruptive.

Alternatively, we could apply the technology built to transmit and manage data on the internet to the energy realm.

There are opportunities to make the things that consume and generate energy smarter, controllable and more responsive. Combined with the emerging energy-storage sector (such as Moixa’s Smart Battery), this would enable customers’ demand and generation to be matched to the available supply.

For example, you could time your EV charging so it sucks in energy when there’s an excess and the local grid has the capacity to transmit it, avoiding the need for reinforcement and additional generation. This approach – a smart grid – would allow customers to be part of a smart solution to the problem, rather than merely adding to it.

‘Civil servants working in government understand the opportunity of upgrading to a smart grid,’ Chris says. ‘But they need to move faster to remove blocks from the regulatory system so this technology can be demonstrated at a scale that proves it’s viable.’

A smart grid would require smart metres in people’s homes to feed information about energy usage into a system that is constantly checking and balancing supply and demand. The system would analyse patterns of consumption and map the UK’s energy supply accordingly.

While the government has set an ambitious goal of getting smart metres into every UK home by 2020, bill payers will have the right to refuse them; as a result, it’s unclear how many homes will participate and how effective a smart grid would be.

Still, Chris feels it would be counter-productive to make smart metres compulsory. ‘You could end up creating unnecessary resistance’, he explains. ‘The key is to make them so compellingly beneficial that everyone will want them. We need to make the services they provide really useful and valuable.’

Moixa’s GridShare platform does just that; the cloud-based software system connects to energy-storing devices in a customer’s house, such as EVs and home battery systems, then uses machine learning to identify patterns, such as when cars are plugged in. This allows GridShare to calculate the best way to control the devices; taking account of the weather forecast, it works out when and how much to charge, and provides dashboards and apps that help users understand their energy use and control the system manually.

Groups of systems in a network of houses are then aggregated and managed to provide services to the grid; in periods of excess wind generation devices can be charged during the night, and sudden increases in demand can be managed by reducing the energy a large group of houses is using to respond. These are services for which the grid will pay, and the revenue is shared with customers to increase the benefit they get from the assets they have in their homes.

The grid as a social good

Moixa is working in partnership with the largest companies running the grid in the UK, including National Grid, to deliver on its vision for the electricity infrastructure of the future. ‘We believe the best way to implement the next-generation grid is by working with the incumbents who manage and own the existing grid’, Chris says, ‘bringing them along with this vision of how energy could be generated, transmitted and used in the future.’

The GridShare platform is also being exported to other countries; Japan has agreed both a £5m investment and a partnership with the $45bn trading house ITOCHU, which is installing battery energy storage systems in homes across Japan at a rate of 600 to 1,000 per month. ITOCHU partnered with Moixa so it can use the ‘GridShare brain’ to add intelligence to the hardware it’s deploying, and enable the next generation of energy models for these homes.

Moixa believes that the electricity grid is a social good, a resource the whole of society needs. Crucial to the team’s vision is the avoidance of a scenario in which independence from the grid is something the rich are able to afford while the rest are left paying for an increasingly dilapidated network. ‘We believe the way to avoid this socially divisive outcome is by helping the existing infrastructure and companies adapt to this distributed future’, Chris tells us. ‘Accordingly, we have been working in partnership with energy companies and social housing providers to offer clear benefits to all sectors of society.’

Moixa Smart Batteries start from just £2,950 (including VAT and installation) and could save hundreds of pounds a year off your energy bills. Moixa can also supply and install solar panels and Smart Batteries as a package, starting at £4,995.

To find out whether a Moixa Smart Battery or a full solar and battery package could be fitted to your home, call 0161 883 2374 or visit moixa.com/solar-battery