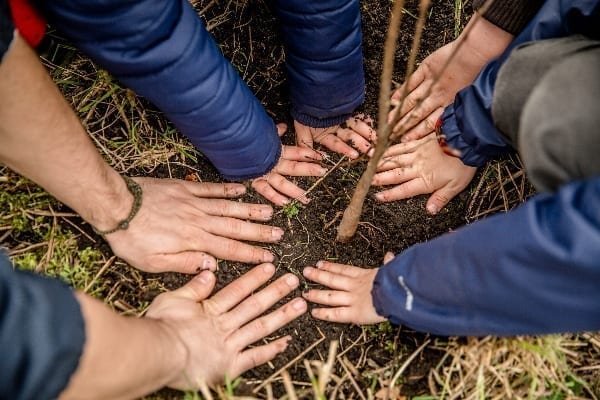 The Octopus Energy tree team shares details of the 10,000 native trees planted so far in 2019

Planting trees is now the best way to tackle rising temperatures and climate change, according to a study by two eminent climate-change scientists published on 05 July 2019.

Robin Chazdon, of the University of Connecticut, USA and Pedro Brancalion from the Department of Forest Science at the University of São Paolo, Brazil said: ‘To avoid the devastating effects of climate change and biodiversity loss, humanity must protect and restore native ecosystems.’

They added, ‘International conventions and organisations support forest restoration as a method for mitigating hazardous environmental shifts, but questions remain as to where and how to focus such restoration efforts.’

London is one of the most polluted cities in the UK. In fact, research from the London Atmospheric Emissions Inventory shows that every single borough exceeds World Health Organisation limits for air quality. Shockingly, nearly 95% of London’s population lives in areas that exceed the limit by 50% or more.

This year, for the second year in a row, we paired up with customer-nominated schools, charities and community organisations around the UK to plant native trees in a bid to help focus reforestation efforts.

In 2019 we planted over 10,000 native trees – from wild cherries to weeping willows – across the length and breadth of Britain.

Will it make a difference?

We wanted this project to seed change that goes far beyond cleaner air, and teach new generations of conservationists and gardeners about our environment and how to take action on climate change.

We spoke to loads of amazing people – from an eco-allotment on a busy road in Sunderland, a community centre for the blind in the Midlands, a sustainable farm charity in Devizes, Wiltshire and lots more places in between – about what these trees will mean to them.

For some, it was the chance to brighten up a plot of land that was previously unused, unloved or both. For others, it meant the chance to encourage biodiversity from insects to mini-beasts, creating spaces that allow children to begin a conversation with nature, and to use outside space as a place of calm and contemplation.

What also came across was the level of passion, care and enthusiasm each team has for the work it does.

To thank the wonderful organisations joining in across the UK, we put all 600 groups up for funding prizes. Fourth place bagged £1,000, third place got £2,000 and second place won a hefty £4,000. Our gold medal earned its project a cool £8,000. Have a look at our case studies to find out who won and why.

The last word goes to our founder and CEO Greg Jackson, who wrote to all our customers to explain why he had put so much energy and resource into this initiative.

‘40 of the UK’s major towns and cities have dangerous levels of air pollution. It’s a horrific reality that many of us breathe unsafe air every day – my own family, almost the whole Octopus staff – and many of you, too.

‘These trees will soak up toxic traffic smog, a single tree cleaning 7-24% of micro-particulates from the surrounding air.

‘On average, each tree will absorb 2kg of carbon annually, collectively making our atmosphere cleaner by tens of tonnes of carbon every year.’

WALSALL SOCIETY FOR THE BLIND

We rolled into Walsall on 05 April 2019 to plant a sensory garden with the Walsall Society For The Blind (WSFTB). We had the help of gardener extraordinaire and all-round good egg Chris Collins, formerly the Blue Peter gardener.

Walsall deputy mayor Paul Bott also joined in to give us – and a raft of day-centre regulars, staff and volunteers – a hand with the planting.

At WSFTB, Chris Collins has carefully curated a bundle of trees that form a sensory mini-woodland, allowing the centre’s visually impaired members to enjoy the smell, sound and feel of the trees.

The centre is on a main road just past the bus station in Walsall. Planting trees is absolutely crucial in urban areas that are full of smog-causing traffic; it’s where they can have the most impact when it comes to preventing carbon from being absorbed into the atmosphere.

‘As an Octopus Energy customer myself, I saw on the website that Octopus was brilliantly giving away lots of trees to help cut down emissions and bring more oxygen into the atmosphere, and to green up urban spaces as well. So I thought what a fabulous idea. I thought it was genius because it’s such a wonderful thing to do. So I wrote off for free trees; you could choose which trees you wanted, so I chose sensory trees.’

Chris and the WSFTB team had a fantastic time digging and planting the future sensory mini-forest, and there was more than a slice of good-natured banter.

On Friday 05 April, Chris Collins joined us again as we headed for an inner-city park in Sunderland laden with tools, mulch and compost.

We were meeting the Friends of Backhouse Park, a conservation group of volunteers headed up by the inspirational Mary Todner. It also happened to be quite possibly the best-prepared group of tree planters we’d ever seen.

Backhouse Park is a wooded gorge that is a natural arboretum close to the city centre. A V-shaped valley with paths snaking around its sharp inclines, the land previously belonged to the Quaker family Backhouse, who gave the land to the city as a gift to be preserved in perpetuity as a park.

Sadly, in recent years the land has been neglected, with tree planting a hit-and-miss affair. We got things started with a 50-tree mini-woodland, full of native broadleaf saplings from willows to downy birches – ideal for planting in wet soil. We have no doubt Mary and her team of committed volunteers will turn the place around.

We had over a dozen volunteers of all ages; the social cohesion created when you’re outside getting your hands dirty is a truly great leveller that brings people together.

After all the planting was done, we wanted to honour and build on the developing tree projects in schools and wider communities.

All the schools and groups that had taken part in tree planting with us were put up for a nationwide vote. Anyone could vote – Octopus customer or not – for their community to win a funding prize. When our competition closed at the end of April, more than 6,000 votes had been cast and our winners were clear.

An £8,000 funding prize went to Balgowan Primary School in Bromley, Greater London. The school was championed with great zeal by teaching assistant Tracey Cleveland, who bombarded social media and encouraged parents and friends of the school to vote.

We rang a few weeks ago to pass on the good news. It’s fair to say that there were tears – we’re hoping happy ones. We made a date to meet at the school and find out what the prize would be used for. To make the meeting extra special, Chris Collins volunteered to join us.

We pitched up at Balgowan’s playing field, which doubles as its forest and nature school. Two classes joined us for the afternoon when they took part in their outdoor nature classes; Tracey explained that they aim to have outdoor sessions every day.

We decided to join a group that was learning how to make a fire, using flint to create a spark and kindling to encourage the flames.

Tracey then treated us to a tour of the field, with Chris expertly advising on what to plant in their shaded area. Wild garlic is good apparently, and building a pond would encourage wildlife. We found that if you build a ledge and place rocks in it, frogs will come and hang out in their froggy lido.

Tracey, armed with a mood board, said that she wants to create some shelter in the field as it is quite exposed to the elements. This will mean outdoor learning can continue, whatever the weather.

It was great to see that most of the school’s prize money will be spent on its outdoor space and finding new ways to enhance it for the children. After we’d had a good look round the field, we presented our large, comedy cheque to Tracey and the children.

Back inside, Tracey gave us a tour that revealed the paucity of green outdoor space at the school itself, further highlighting the essential nature of the additional field we had just visited.

We agreed that we would continue to keep in touch and see how they get on with creating their shelter. We are really looking forward to coming back to Balgowan to see the transformation.

Click here to start your switch to Octopus Energy in under two minutes.