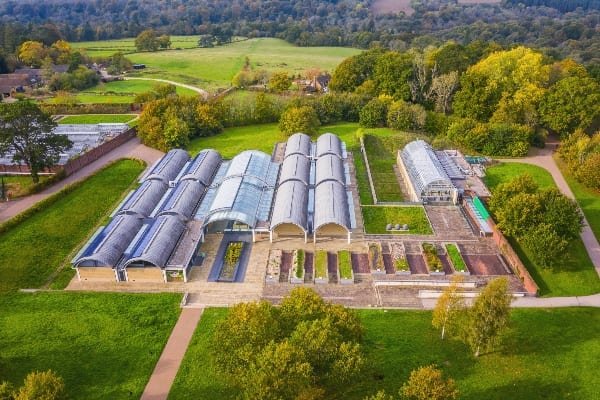 The seed bank, opened in November 2000 and located at Wakehurst, Kew’s wild botanic garden in Sussex, acts as an ‘insurance policy’ for rare, threatened and useful plants, so that they can be protected for generations to come.

The anniversary will be marked with a 24-hour social media party across Twitter and Facebook. Partners from around the globe will be sharing content related to their seed banking journey and partnership with the MSB at intervals related to their time zone.

RBG Kew’s digital channels will also be sharing content throughout the day in what promises to be a huge celebration of seed conservation and partnership.

20 years on from its opening, the MSB represents the largest wild seed conservation project in the world, with 2.4 billion seeds from 39,681 species, sourced from 190 countries and territories.

When counting the collections held across the global partnership, the MSB and its partners have helped protect 46,664 species – 16% of the world’s seed-bearing plants.   Created at the turn of the new millennium, this ‘Noah’s ark’ for plants has never played such a critical role.

As the planet faces a biodiversity crisis, with two-fifths of the world’s plants at risk of disappearing, the MSB, along with its global partners are absolutely vital to keeping vulnerable and economically important plants safe.

Our most precious plants

Whilst the Norwegian seed bank Svalbard stores seeds of the world’s crops, the MSB banks wild plants, including some of the relatives of our major food crops.

The seeds can be taken out of the vaults to be used for many purposes, including research, plant breeding, species re-introduction and vegetation restoration.

Currently 75% of the MSB’s requested seed samples have been used in scientific research, 13% in conservation and the remainder for education and horticultural display.

‘As we face the toughest decade ever for our planet with species disappearing at an alarming rate, the work of the Millennium Seed Bank couldn’t be more important – even more so than we could have anticipated 20 years ago.

‘The species safeguarded by the partnership since 2000 offer possibility and hope for future generations. They could help provide the next major food crop, develop a new cancer drug, or restore degraded habitats destroyed by climate change and deforestation.

‘This would not have been possible without the dedication of our partners around the world, who have worked with us in great harmony to seek out the planet’s most precious plants, and to trust us with a collection for safekeeping here in the UK.’

The seeds, and the data collected alongside them, provide a unique resource for science and conservation, helping scientists to understand and respond to threats such as new pests and diseases, climate change and habitat loss.

As banked seeds live for many decades, they also provide a vital benchmark of current genetic diversity.

These seeds make a vital contribution to global targets such as the UN’s Sustainable Development Goals, in particular goal 2: zero hunger, goal 13: climate action and goal 15: life on land.

The striking glass building, opened by HRH The Prince of Wales in 2000, houses an underground seed vault that is floodproof, bomb-proof, radiation-proof and has the capacity to hold up to three quarters of the world’s flora – but the MSB is much more than just a building.

It also represents a global network for biodiversity conservation with over 260 partnerships with institutions from 97 countries and territories across Africa, the Americas, Australia, Europe and the Middle East.

Partners range from universities and botanic gardens to government institutions and more. Since 2013, RBG Kew’s MSB staff have helped with the development of seven new, international seed banks, where facilities vary from basic to state of the art.

These important partnerships mean that, wherever possible, every species collected and banked in its native country is also duplicated at the MSB, so that every plant is safely stored in two different locations – the ultimate ‘insurance policy’.

The seeds, collected from nine of the world’s biogeographic regions and all 36 of its terrestrial biodiversity hotspots, are frozen in time, stored in air-tight glass containers stacked in huge -20°C freezers.

‘The Millennium Seed Bank is a truly international project, which brings together thousands of scientists across the world who all share a common love for plants and an ambition to ensure their conservation for future generations.’

Training and development have been crucial to the seed bank’s success and Kew scientists have delivered training programmes at the MSB and in countries across the globe for more than 2000 people from 61 different countries and territories.

Many of these people have gone on to manage seed banks which conserve their national and regional floras.

‘It is wonderful to be part of a worldwide conservation project and to be able to safeguard our species from total extinction. We have received so much support from the MSB including funds, training and guidance so that we can store our flora for the long term. It is a great feeling when you find a species that you have been searching for and can finally be sure that it is safely banked for the future.’

The MSB has also been vital in protecting UK native species and earlier this year celebrated banking 13 million seeds from over 10,000 native UK trees and shrubs.

This collection, made by the UK National Tree Seed Project, funded by players of People’s Postcode Lottery, offers future possibilities for both research and conservation of UK woodlands.