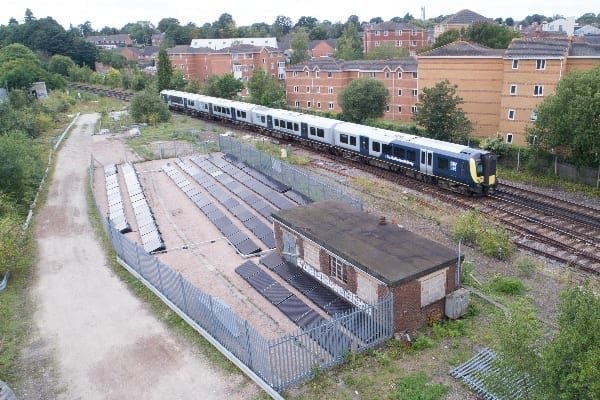 World first as solar connected to railway line in Aldershot

Today (23 August), social enterprise Riding Sunbeams will switch on the first solar array to directly supply a railway line with electricity, paving the way for the world’s first solar-powered trains.

If successful, the innovative scheme will prove that solar can safely bypass the grid to provide a direct supply of energy to UK railways’ traction systems, without disrupting train operations. This is something that has never been done before anywhere else in the world.

‘Matchmaking the UK’s biggest electricity user, the railways, with the nation’s favourite energy source, solar power, looks like the start of the perfect relationship. Helping to get the railways off fossil fuels in this way will cut running costs and benefit local communities at the same time as helping to tackle the climate crisis.’

Made up of around 100 solar panels, the 30kWp solar test unit will be connected to an ancillary transformer on the Wessex Route’s traction system, with energy from the array set to power signalling and lights.

The team is also gathering electricity demand data from six potential community solar sites in the south of England.

Putting all this real-world data together, the team will work out how to plug in much larger solar arrays to power trains.

By the end of 2020, Riding Sunbeams hopes to build and connect the world’s first full-scale community- and commuter-owned solar farm to UK railways.

The solar rig will be connected today to the railway line at a site in Aldershot, where lineside communities like these and rail passengers will eventually have the chance to invest in these pioneering ‘solar traction farms’.

‘We are proud to be working with 10:10, Community Energy South and our other stakeholders to deliver this exciting, world-first project on the Wessex route.

‘We have ambitions to roll this technology out further across the network should this demonstrator project prove successful so we can deliver a greener, better railway for our passengers and the wider public.’

Funded by the Department for Transport through the First of a Kind Round 2 competition, and delivered by InnovateUK, the ‘First Light’ project emerged from an earlier study by 10:10 Climate Action and Imperial College London’s Energy Futures Lab.

The study showed that connecting solar panels directly to rail, tube and tram networks could meet a significant share of their electricity needs.

Crucially, the research also found that this clean, renewable power could be supplied at a lower cost than electricity supplied via the grid today – without the need for public subsidy.

Click here to read our article about the green initiatives at King’s Cross railway station.