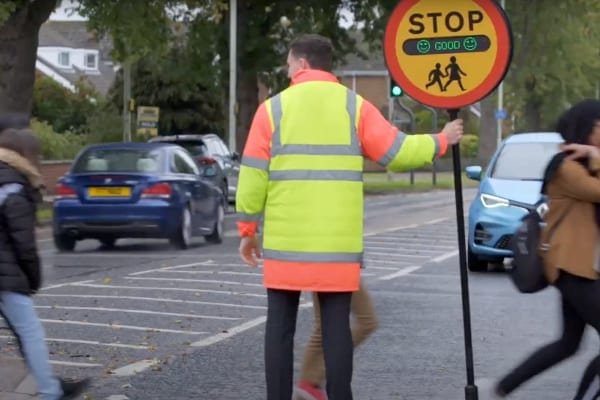 Renault has re-invented the iconic symbol of road safety, the ‘lollipop’, to encourage drivers to not idle in their vehicles.

Renault commissioned the custom lollipop as part of its ‘Be Mindful, Don’t Idle’ campaign to raise awareness of the impact of parents and guardians leaving their engines running during the school run. According to its nationwide research, 27% admit to idling regularly.

One side of the Renault lollipop displays the exact concentration of fine particulates – known as PM2.5 – in the atmosphere thanks to in-built air sensor technology. It displays the pollution level in real time to road users.

The reverse features simple iconography that shows whether it is ‘Good’, ‘Okay’ or ‘Poor’, allowing both parents and children to see the quality of the air they are breathing as they enter the school gates.

The bands are based on the boundaries published by the Department for Environment Food & Rural Affairs (DEFRA), running through a range of PM2.5 levels from low to moderate and high.

The lollipop features a highly accurate sensor located in the circular section at the top behind the recognisable ‘Stop’ sign. The black bars have been modified on each side to display the PM2.5 level and associated rating to drivers and pedestrians.

The World Health Organisation recommends that the air we breathe should not exceed 10 μg/m3 of fine particulate matter. The legal limit in the UK is double that figure.

Demonstrated outside Castle Newnham school in Bedford on a road with two schools and a college, the Renault Lollipop recorded air pollution figures of between 2.5 μg/m3 and 14.7 μg/m3 from 07:00 to 07:45, which is deemed as low by DEFRA – ‘Good’ on the lollipop.

At 08:00, as the morning commute began to get busier, the slightly heavier traffic quickly sent the figure up to 25.7 μg/m3 with – exceeding the legal limit in the UK.

By the time the afternoon school run – noticeably busier than the morning one – was in full flow, levels continued to exceed this figure.

‘The lollipop has been the symbol of road safety for decades. Today, safety is not just about how to cross a road, it is also about how safe the air is that our children breathe going in and out of schools on a daily basis.

‘The adoption of electric vehicles is a journey, but in the meantime, it’s important that we all do our bit and don’t leave our engines running unnecessarily.’

An idling engine contributes the equivalent of 150 party balloons’ worth of emissions unnecessarily into the atmosphere every minute.

Renault found idling is more common in urban areas – with 50.1% admitting to doing it, compared with 12% in rural locations. More than 28% of people said they leave their engines running for 6-10 minutes.

According to research by the British Lung Foundation and Asthma UK, in excess of 8,500 schools, nurseries and colleges in England, Scotland and Wales are located in areas with dangerously high levels of pollution.