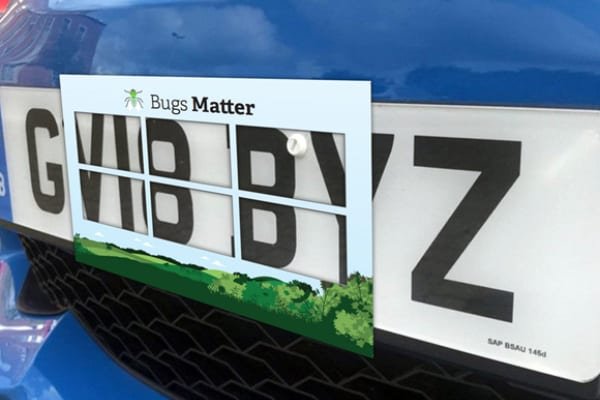 An innovative app to survey insect populations will launch today (28 May) by Kent, Gwent, Essex and Somerset Wildlife Trusts with insect charity Buglife.

The user-friendly Bugs Matter app brings meaningful citizen science to the pockets of thousands and will help wildlife organisations better understand how our insect populations are faring – by asking people to count the number of ‘bug splats’ on their car number plates.

Smartphone users can take part by downloading the free Bugs Matter app from their app stores.

The concept is simple: before making an essential journey in a vehicle, clean the number plate. When you reach your destination count the bugs squashed on a section of the number plate by placing a ‘splatometer’ grid against the plate, which you will get when you download the app.

A photo and details are then submitted. You don’t even need to be the driver of the vehicle you are travelling in (though you will need their permission).

The survey is based  on the ‘windscreen phenomenon’, a term given to the observation that people tend to find fewer insects squashed on the windscreens of their cars compared with several decades ago.

‘Many people remark on not having to clean bug splats off their car windscreens as much as they did 20 or 30 years ago. The falling abundance of flying insects should be a major concern to everybody as these essential creatures are, quite simply, the small things that run the world.

‘Bugs Matter gives everybody the opportunity to take part in essential monitoring that will help us to better understand the health of our insect populations, and our environment as a whole.’

There is growing evidence of insect decline on a global scale, caused by habitat loss and pesticides. The consequences are potentially catastrophic for the integrity of our ecosystems, the future survival of other wildlife and the pollination of crops.

However, evidence is still lacking or only partly understood for many insect groups and species.

Gathering evidence to show the need for urgent action is the first step in making a difference.

In the UK only butterflies and moths have been monitored in enough detail to allow trends to be fully understood.

‘Finding fewer squashed bugs on car number plates is concerning because it suggests their populations may be in trouble. The new Bugs Matter app has the advantage of being indiscriminate – sampling any and every insect hovering or flying about like aerial plankton.

‘The main causes of their decline are chemical use across our countryside, road verges and gardens and habitat loss – but we need lots more data to determine trends and people to take the survey during their day to day car travel. This will strengthen our call for a reduction in pesticide use and better, more joined-up insect habitats as part of a Nature Recovery Network.’

Take part in the survey

The wildlife groups are hoping for hundreds of sign-ups and are urging people to help with the survey, so that patterns in insect numbers can be better understood.

The results showed that the numbers of insects counted was 50% lower than in a survey using the same method carried out by the RSPB in 2004. This is a startling figure, though not enough evidence to say it represents a decline.

Download the Bugs Matter app from your app store today and start surveying. The survey period runs from 01 June to 31 August 2021.

According to Insect Declines and Why they Matter (2019) by Prof David Goulson, University of Sussex, 23 species of bee and flower-visiting wasp have gone extinct in the UK since 1850.

The geographic ranges of many bumblebee species has more than halved between 1960 and 2012.

Numbers of butterflies fell by 46% between 1976 and 2017, with declines running at 77% in ‘habitat specialist species’ such as marsh fritillaries and wood white butterflies.

The abundance of larger moths such as the garden tiger dwindled by 28% between 1968 and 2007, with southern England experiencing the most dramatic changes with a 40% drop in numbers.