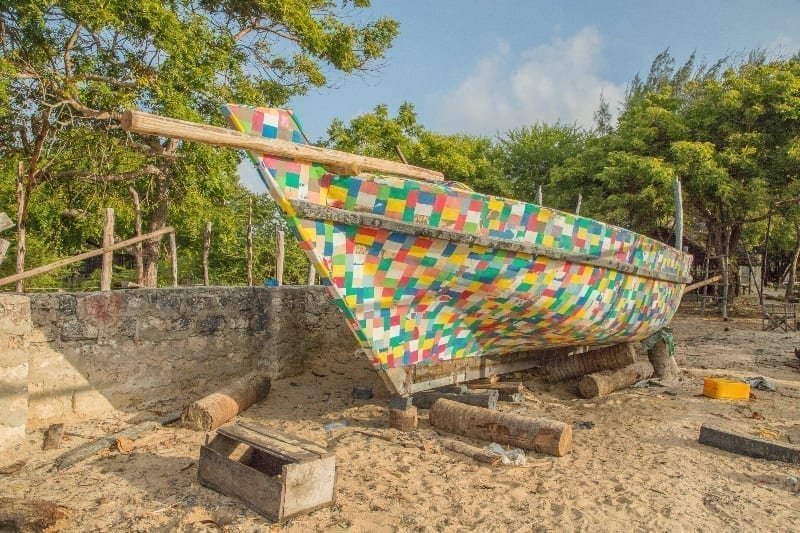 In a world first, dhow made from plastic waste will sail along Africa’s coast to raise awareness about single-use plastic

A traditional dhow sailing boat made entirely from plastic rubbish collected from Kenya’s beaches and towns will make its maiden voyage later this month. During its 500-kilometre expedition from Lamu in Kenya to Zanzibar in Tanzania, the dhow will stop off at communities to change mindsets about plastic waste.

The FlipFlopi is a first-of-its-kind, 9-metre sailing boat made from 10 tonnes of discarded plastic. It has been built by a team calling for a #PlasticRevolution to stem the flow of up to 12 million tonnes of plastic waste dumped into the world’s oceans each year, and to highlight the potential for plastic waste to be re-used.

The dhow was launched in late 2018 in Lamu and has now partnered with UN Environment’s Clean Seas campaign, which engages governments, the public and the private sector in the fight against marine plastic pollution.

‘The FlipFlopi is living proof that we can live differently. It is a reminder of the urgent need for us to rethink the way we manufacture, use and manage single-use plastic.

‘Kenya has demonstrated tremendous leadership in addressing the epidemic of single-use plastic by banning plastic bags. We are clearly moving in the right direction but we need a drastic shift in consumption patterns and waste management practices across the world.’

Professor Judi Wakhungu, FlipFlopi board member, said the project is playing ‘a vital role in engaging the public at large in thinking about plastic differently’.

‘They have a colourful and innovative way of talking about the issue – and their message is really hitting home, reaching parts of the population that other initiatives seldom do’, Professor Judi Wakhungu added.

Only 9% of the nine billion tonnes of plastic the world has ever produced has been recycled. The overwhelming majority of plastics – including plastic drinking bottles, plastic bottle caps, food wrappers, plastic grocery bags, plastic lids, straws and stirrers, and foam takeaway containers – are designed to be thrown away after a single use, ultimately ending up in landfills and the environment.

In the recently published Legal Limits on Single-Use Plastics and Microplastics: A Global Review of National Laws and Regulations, UN Environment found that 127 out of 192 countries reviewed (about two-thirds) have adopted some form of legislation to regulate plastic bags. 27 countries have enacted legislation banning either specific products (e.g. plates, cups, straws, packaging), materials (e.g. polystyrene) or production levels.

The project was founded in 2016 to transmit the message about the impact that plastic is having on marine ecosystems, how this affects us and – most importantly – what we can do about it.

Its co-founder, Ben Morison, was inspired to create a visually engaging #Plasticrevolution after witnessing the shocking quantities of plastic on Kenya’s beaches, an area where he spent much of his childhood.

‘The FlipFlopi project has always been about encouraging change in a positive way, making people smile first and then sharing the very simple message that single-use plastics really don’t make sense.

‘To create the FlipFlopi boat we used only locally available resources and low-tech solutions, enabling our techniques and ideas to be copied without any barriers. So we hope people around the globe are inspired by our beautiful multicoloured boat and find their own ways to repurpose ‘already-used’ plastics.’

The FlipFlopi project team has had to pioneer new techniques to craft the various components of the boat.

The plastic waste was melted, shaped and carved by the team of traditional dhow boat builders exactly as they would do with wood.

These flipflops have been collected on beach cleanups on Lamu’s beaches, where they are among the most prolific items found.

‘We are proud to have built the world’s first sailing boat made from recycled plastic’, said Ali Skanda, the lead boat builder. ‘The next challenge is to set sail and inspire people up and down Africa’s coastline and beyond to look at plastic waste not as trash but as a resource that can be collected and used.’

The expedition will start in Lamu on 24 January. The boat is expected to arrive in Stone Town in Zanzibar on 07 February, where the FlipFlopi and Cleanseas teams will meet up with Conservation Music at the Busara Music Festival, encouraging festival goers to engage with the fight against marine plastic pollution through music and culture.

In Africa, marine debris represents a potential threat to food security, economic development and the viability of marine ecosystems.

With over 12 million people on the continent engaged in fisheries, their livelihood is directly affected by marine pollution, and the proportion of protein intake from fish is high across Africa.

The FlipFlopi-Clean Seas Expedition comes a month before the next UN Environment Assembly, at which more than 150 ministers of environment will gather in Nairobi.

The assembly is the world’s highest-level decision-making body on the environment.

Leading up to the event, UN Environment is zeroing in on the urgent need for sustainable consumption and production, plus innovative solutions for environmental challenges through its #solvedifferent campaign. The campaign is urging member states, the private sector and citizens to rethink the choices they make in their everyday lives.

Click here to find out about the all-female crew tackling plastic pollution in our oceans.