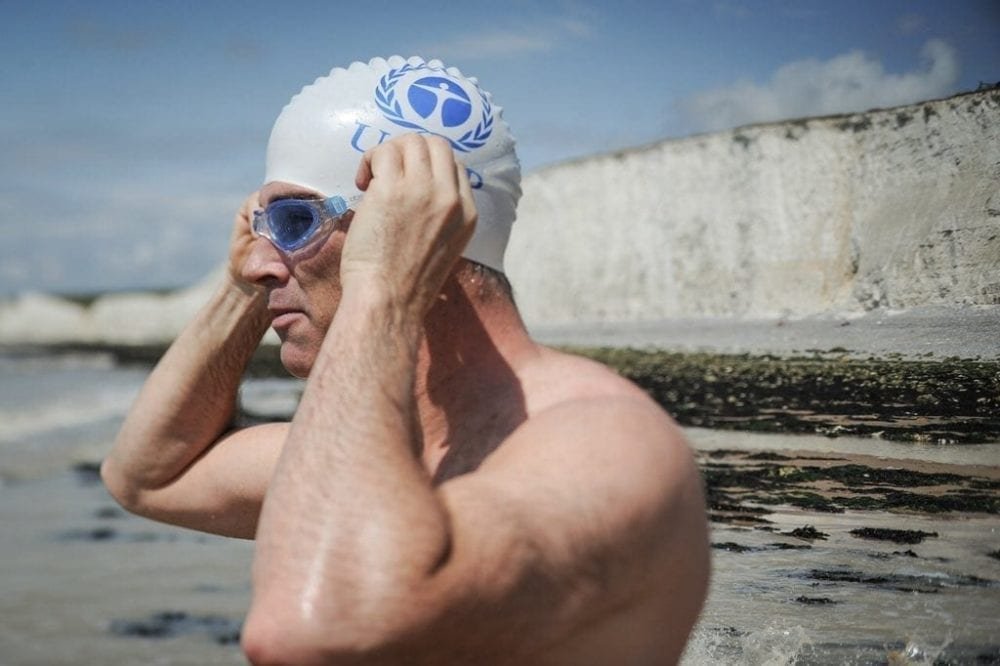 Today (12 July), endurance swimmer and UN Environment Patron of the Oceans Lewis Pugh will set off on a record-breaking mission to swim the entire length of the English Channel – his longest distance ever – to draw attention to the urgent need for ocean protection.

He will be the first person to ever attempt to swim the whole length of the English Channel from Land’s End to Dover – more than 350 miles across 50 consecutive days of swimming. It will be his longest swim to date and, we suspect, his toughest: averaging five hours and 10-20km every day, Lewis won’t reach the finish line until late August.

About 1,800 people have swum across the English Channel since Captain Mathew Webb first succeeded in 1875. However, no one has ever attempted to swim the length of the Channel according to the rules set down by the Channel Swimming Association – in just a pair of Speedo swimming trunks, goggles and a cap. He’ll brave exhaustion, cold and the busy ocean traffic to deliver a message for the environment.

The aim of The Long Swim is to build on the existing groundswell of UK public and political support for greater action on ocean conservation. Lewis, the UN Patron of the Oceans, will be urging the UK government to accelerate its Blue Belt commitments to establish Marine Protected Areas in the UK and its Overseas Territories. Currently only one hundred thousandth of UK waters (7km out of a total 750,000 km) are fully protected.

The Long Swim will mark the start of a worldwide campaign entitled Action for Oceans, an initiative that is calling on governments to fully protect at least 30% of the world’s oceans by 2030.

Over the past 30 years, the British swimmer has pioneered swims in the most challenging environments on Earth, including the Antarctic, the North Pole and the Himalayas. He has campaigned on behalf of the world’s last pristine marine wilderness areas, and now he is bringing his message home.

Lewis will increase his weight to 100kg to provide vital insulation from cold water and exhaustion. The Channel Swimming Association, which has been authenticating cross-channel swims since 1927, will observe and verify his swim.

Surfers Against Sewage, one of the UK’s leading marine conservation charities, is a partner in The Long Swim and will be hosting regular beach clean-ups along the swim route.

‘I’ve been swimming in the world’s oceans for 30 years. This is not a long time in ecological terms, and yet I’ve seen the oceans change before my eyes.

‘I am swimming the length of the English Channel to call on the British government to urgently protect the waters that surround the UK. The truth is that only 7 square kilometres out of a total 750,000 square kilometres of the UK’s waters are fully protected. That amounts to a mere one-hundred-thousandth. This is shocking. The British Government must protect the UK coastline properly by introducing fully protected Marine Protected Areas (MPA).

‘It has been shown that fully protected Marine Protected Areas give distressed and degraded seas their best chance of recovery,” Pugh continues. “But the need for action is urgent, and the time to act is now. In a few years’ time, it will be too late to fix this crisis.’

To prepare for The Long Swim, Lewis has been training hard in the cold and rough waters off South Africa and the Falkland Islands, swimming an average of 7 kilometres a day.

Speaking of the challenge that awaits him, Pugh says, ‘There will be bad-weather days when I simply won’t be able to swim. The English Channel also has very strong tides. I’ve got to get the timing right, or I could be going backwards.’

Pugh believes that exhaustion and repeated exposure to cold will be his biggest adversaries. ‘Not to mention what I meet in the water – the Channel is the world’s busiest shipping lane, and has plenty of jellyfish.’

Click here to find out about the chemist and captain who have joined forces to transform plastic ocean waste into fuel.