The return of wild beavers?

New consultation presents golden opportunity for beavers to be wild 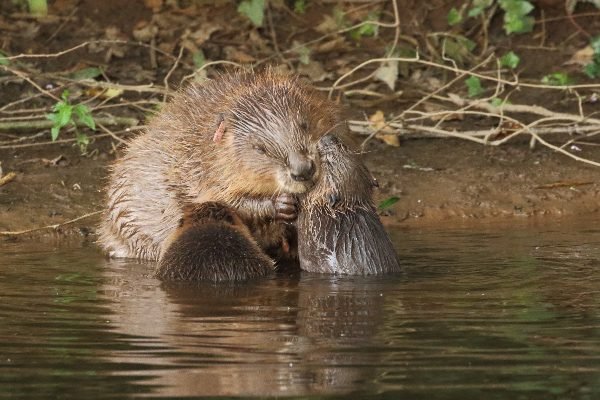 A government consultation has been launched to ask the public if they want to see beavers released into the wild in England.

To date, the only officially sanctioned beavers living wild in the UK are in Scotland and along the River Otter in Devon, where Devon Wildlife Trust has worked with the local community to ensure they can thrive.

The Wildlife Trusts believe beavers should be allowed to return to the wild across the UK and expand their range naturally. The movement of 46 charities has been calling for ambitious strategies in England and the devolved nations to enable this to happen.

‘The Wildlife Trusts are paving the way for the return of wild beavers by mapping out the best river catchments for reintroducing them. It’s vital to plan this using science from successful initiatives in the UK and across western Europe. There’s an impressive body of evidence to show how beavers can help to improve the quality of rivers and wetlands and the wildlife they support, improve water quality, and reduce flood risk, as well as contributing to carbon storage. Beavers are fabulous – they can do all of this free of charge.

‘Beavers are wild animals – and as their populations expand their activities will need managing. The Wildlife Trusts have played, and will continue to play, a pivotal role in the return of beavers in a responsible manner. We and our partners, such as University of Exeter, hold significant knowledge and skills that can be used to aid beaver reintroduction and management. For example, our leading role in the five-year trials on the River Otter in Devon and in Knapdale in Argyll and Bute, along with lessons learned from abroad, has given us a huge amount of experience as to how to manage these animals effectively.’

ROB STONEMAN
Director of landscape recovery at The Wildlife Trusts

The consultation paves the way for future releases into the wild that deliver significant benefits for nature and society.

The public have until 17 November to have their say about the future of this keystone species.

Get to know beavers

Beavers are industrious herbivores that are native to mainland Britain but were hunted to extinction in the 16th century by people who wanted their fur, meat and scent glands.

The end of beavers led to the loss of the mosaic of lakes, meres, mires, tarns and boggy places that they were instrumental in creating.

Their ability to restore and maintain important wetland habitats is why reintroducing this species is so important.

Five years of research by Devon Wildlife Trust shows that beavers are brilliant for people and wildlife.

They create a fantastic range of wetland habitats that provide homes for other wildlife and greatly enhance conditions for nature to thrive and store carbon.

The channels, dams and wetlands that beavers engineer hold back water and release it more slowly after heavy rain, helping to reduce the risk of flooding.

Their activities prevent soil being washed away after rainfall – their dams filter water, cleaning it and reducing pollution downstream.

The Wildlife Trusts want the England beaver strategy to achieve its full potential and are calling on the government to ensure beavers thrive in the wild by supporting carefully targeted reintroduction projects, bolstering populations where necessary to ensure their long-term health.

Landowners should be helped to make space for watercourses and wetlands created by beavers through appropriate schemes and funding programmes.

Systems of management should ensure beavers are properly protected in a flexible and simple way that avoids excessive administrative burdens on land-managers and regulators.

Local beaver management groups should be supported to deliver information, advice and assistance to maximise the benefits beavers bring and minimise potential conflict.

The Wildlife Trusts are at the forefront of beaver reintroduction in the UK and are releasing a record number of beavers in 2021 – 20 years after bringing the first-ever beavers back to Britain.

Around 20 beavers will be released this year in fenced areas. In Scotland and Devon, the populations have been allowed to become wild; elsewhere, beavers have been released in enclosed areas.

Funded by The Wildlife Trusts, Professor Richard Brazier of University of Exeter is undertaking a mapping exercise for England and Wales to assess which areas are suitable for beaver reintroductions.

South-west England has now been fully mapped and Professor Brazier and his team are already progressing with mapping south-east England. This mapping work is expected to extend to all of England and Wales by March 2022.

Areas that could be suitable for beavers in Scotland have been mapped by NatureScot.

Click here to add your voice to The Wildlife Trusts call for an ambitious beaver strategy.