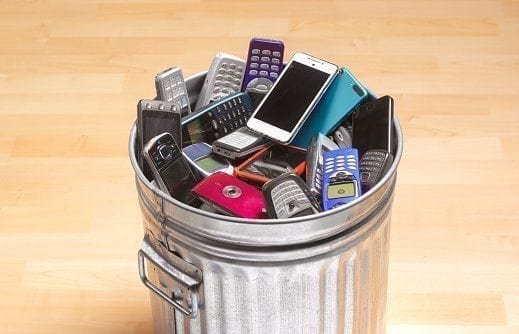 Smartphone production and disposal over the last 10 years is proving to have a significant impact on our planet, according to a Greenpeace USA report.

The report shows roughly 968 TWh was used to manufacture smartphones since 2007 – almost the equivalent of one year’s power supply for India – and the devices contribute significantly to the 50 million metric tonnes of e-waste expected to be generated in 2017.

The report was released as Greenpeace Spain activists attempted to unfurl a banner from the building where Samsung was holding a press conference at the Mobile World Congress in Barcelona with the message ‘Reuse, Recycle, Rethink’.

The activists are demanding Samsung reuse and recycle the 4.3 million Galaxy Note 7s recalled in 2016 following reports the devices were exploding or catching fire.

‘What has happened with Samsung’s recall of the Galaxy Note 7 is indicative of a wasteful and unsustainable system. Rushed design and production cycles can lead to wasteful mistakes, not to mention the impact on our planet.

‘Samsung still hasn’t shared a clear plan to deal with the 4.3 million phones that it recalled. If Samsung is serious about making sure this never happens again, it must lead the IT sector and move towards a system that allows phones to be more easily repaired, reused and recycled.’

From smart to senseless

Greenpeace USA’s report, From Smart to Senseless: The Global Impact of Ten Years of Smartphones, provides an overview on the increasing use of smartphones across the world since the release of the first iPhone in 2007, and how this has impacted our planet.

It reveals that 7.1 billion smartphones have been produced since 2007, and that smartphone ownership is expected to rise to 6.1 billion phones in 2020 – roughly 70% of global population.

A United Nations University study found that, in 2014 alone, e-waste from small IT products like smartphones was estimated to be 3 million metric tonnes. Less than 16% of global e-waste is believed to be recycled.

Only 2 of 13 models Greenpeace USA and iFixit reviewed as part of the research had easily replaceable batteries, meaning consumers are forced to replace the whole device when the battery life starts to dwindle. In the US, smartphones are used for an average of 26 months.

‘If all the smartphones produced in the last decade were still functional, there would be roughly enough for every person on the planet. Consumers are pushed to upgrade their models so frequently that the average device is used for just over two years. The impacts on the planet are devastating.

‘When you consider all of the materials and energy required to make these devices, their short lifespans and the low rate of recycling, it’s clear we can’t continue this way. We need devices that last longer and ultimately, we need companies to embrace a new, circular production model.’

Greenpeace is calling on the whole IT sector to embrace a circular production model in order to address the root cause of many of these environmental challenges.

The charity believes Samsung should lead by example and publicly commit to recycle the Galaxy Note 7s while minimising their impact on people and the environment.

Click here to read Greenpeace USA’s report ‘From Smart to Senseless: The Global Impact of Ten Years of Smartphones’.