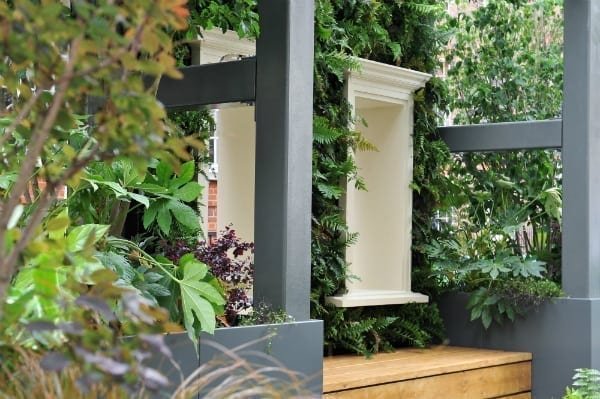 An award-winning garden has opened just off London’s world-famous Oxford Street after being moved to the heart of the West End from RHS Chelsea Flower Show.

The Wild West End Garden has been developed by the area’s businesses to improve biodiversity and air quality, promoting happiness and wellbeing in the retail and leisure centre.

The Wild West End Garden, which won a gold medal in the Spaces to Grow category at Chelsea Flower Show, has been moved to Old Quebec Street in London’s West End to provide a tranquil, green oasis for visitors to the district.

The goal of Wild West End is to create greater connections with Nature for residents, visitors and workers.

The changing face of the high street

It’s hoped the garden will regenerate the streetscape on Old Quebec Street and improve the visitor experience for the 142 million people that visit Oxford Street’s 260 stores each year.

Research shows that 85% of people believe the quality of public space has a direct impact on their lives and on the way they feel, so businesses in the busy shopping district are focused on transforming the environment for its customers, workers and the local community.

Cllr Richard Beddoe, cabinet member for Place Shaping and Planning, Westminster City Council, said, ‘High streets across the country are changing and as councils it is our role to reshape public spaces to suit modern lifestyles. Bringing this fantastic garden to the heart of our city, The Wild West End scheme, and projects like it ensure our historic centres stay relevant, creating unique new attractions for everyone to enjoy.’

To date, the partners have installed over 6,500m2 of green space across their buildings, including nearly 50 green roofs, integrating ecology features such as beehives and bird and bat boxes to provide habitat value.

Sightings across the West End since 2016 have included bird and bat species like the black redstart, the starling, a kestral and Leisler’s bat (all of which are rare and of a high conservation priority) feeding in locations in London’s West End where they were previously not present.

One of the most impressive sightings was of a great spotted woodpecker. This species generally requires a habitat of high ecological quality, so the sighting demonstrates how successful the West End has been in supporting a thriving eco-system in this part of London

‘I feel privileged to have been asked to be a small part of the greening of London, many of the gardens I have put on the showground at Chelsea have been related to this theme as I feel it is imperative to create healthier spaces for people living in and frequenting the city.

‘I hope the garden thrives, is well used and helps to improve the air quality for visitors and residents of the West End for the time it will be spending in this space.’

With London often cited as having one of the poorest records on air quality in Europe (studies show over 9,000 people die early each year in London due to poor air quality), the new garden will also help the West End in meeting this challenge.

The ferns and plants have been specifically chosen to help purify the air and remove pollution with the likes of acer, Chinese dogwood tree and seven son flower tree, which all have a beneficial impact on air purity.

In other global cities, the benefits of green space have been well documented; the introduction of green roofs across 10% of Chicago’s buildings removed 17,400mg of nitrogen dioxide each year.

Estimates suggest this investment could save somewhere between £17m and £65m in public health costs. Additionally, the Million Tree Initiative in New York, which saw a million trees planted, removes 2,200 tonnes of pollution from the atmosphere each year.

Click here to find out how thousands of plants and materials from the world’s most prestigious flower show have been rehomed.