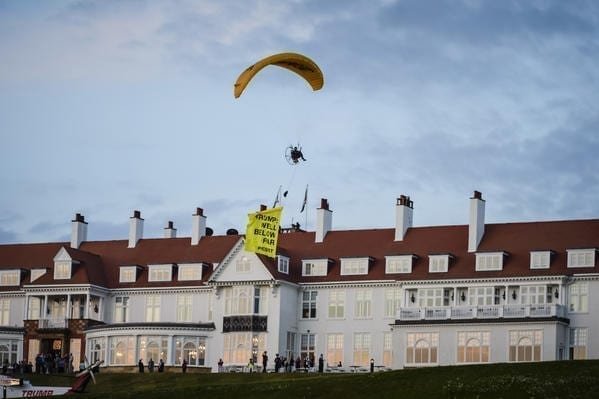 Greenpeace flew a paraglider over Turnberry during Donald Trump’s visit to his Scottish golf course. The paraglider carried a banner bearing the message TRUMP: WELL BELOW PAR.

The paraglider flew three miles across the Ayrshire countryside at 9.30pm – minutes after Trump arrived at the course on Friday night – before circling the lawn in front of the Turnberry hotel where the US President is staying for the weekend.

‘The worst president ever’

Greenpeace spokesperson Ben Stewart said Theresa May ‘should not have dignified Trump with a visit to the UK’.

He added that the vast majority of British people are ‘appalled by his words and deeds’, and said Donald Trump ‘is, simply, the worst president ever. That’s why we flew over him with a message branding him well below par.’

‘Trump calls climate change a ‘con job’ and a ‘myth’. He pulled America out of the Paris climate accord and overturned the Obama clean power plan that would have slashed American pollution. He’s committed to burning more dirty coal and overturned the ban on offshore Arctic oil drilling. And that’s before you even get to talking about separating kids from their parents and caging them.’

A Greenpeace representative at the police line informed officers about the fly-past before it happened.

Greenpeace also telephoned the police air incident advisor 10 minutes before the glider arrived, telling them what was planned.

At the same time Greenpeace contacted Prestwick air traffic control by telephone and radio to inform them about the paraglider’s arrival.

The wing of the paraglider had a huge Greenpeace logo on it so people – including the president himself – would know who was flying overhead.

Click here for more on whether Trump can ignore the Paris climate agreement.