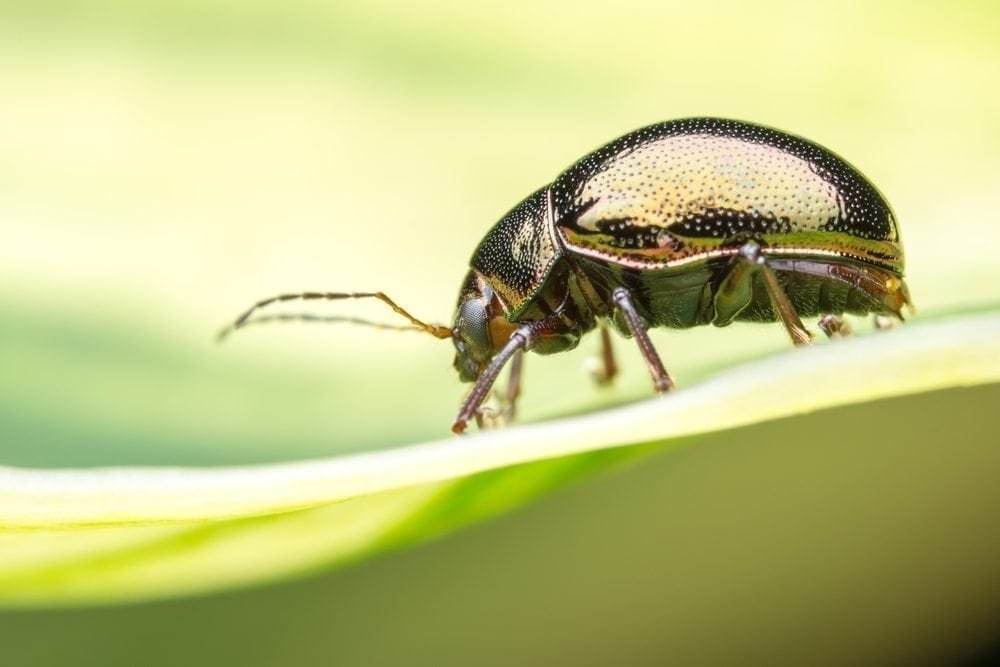 Research reveals that many of our leaf beetles and stoneflies are on a ‘red list’ of species that are under threat of local extinction.

New reports have found that, of the UK’s 283 leaf beetle species, three have become extinct in the last 100 years. Seven are classified as critically endangered and possibly already extinct in Britain, as they have not been seen since 1950.

35 are placed on the new red list and considered either ‘critically endangered’, ‘endangered’ or ‘vulnerable’, and under threat of becoming extinct in Britain in the near future.

Stoneflies fare slightly better. Out of 34 species found in Great Britain, one is now extinct, one is vulnerable to extinction, and another now joins the red list as a critically endangered species.

‘The recently published State of Nature Report showed that at least two out of three species of British wildlife are declining, and we know that many species of invertebrate have already become extinct in Britain. These reports will put a strong spotlight on those species that will become extinct over the next few decades unless we take positive action and try to reduce the many threats facing them.’

The loss of one species a year in a large species group (invertebrates) may not sound much, but over 50 or 100 years it amounts to a major process of extinction that leaves behind only the commonest species.

That, in turn, means the ecosystems that all life depend on are not in good shape.

The two new reports from the Species Status Project have been published by Natural England in collaboration with Buglife. It is hoped the project will help conservation organisations to target future action.

The Species Status Project is a new initiative that provides up-to-date assessments of the threat status of various insect species using internationally accepted guidelines developed by the International Union for Conservation of Nature (IUCN).

‘These reviews further build on our knowledge of the status of these species, helping us to focus our attention on managing our protected sites appropriately to support those most in need’.

Both groups of insect are highly sensitive to their environment. Leaf beetles, named after their habit of eating leaves, are often specific to certain plants in certain habitats.

Stonefly larvae are particularly sensitive to organic pollution; they are regarded as excellent indicators of the health of the natural environment. Targeted action supported by both Natural England and the voluntary conservation sector is underway to try to prevent further declines in these species.

The reports provide vital new evidence that will help focus resources on managing habitats in the best way to improve the conservation status of these overlooked but important insects.

The rare and visually stunning iridescent green tansy beetle (Chrysolina graminis) was once widespread in Britain’s wetland areas, but it is currently critically endangered – not just in the UK but across its worldwide range.

It is now a conservation priority species in England, which means that public bodies have a duty to protect it and its habitat. It was believed to have one last remaining stronghold in the UK on a 30km stretch of the banks of the river Ouse in York, mainly eating tansy (Tanacetum vulgare), a perennial herb which has given the beetle its name. At their York site they complete their entire life cycle on and around the plant, beside riverbanks or in wetlands.

The site (Clifton Ings and Rawcliffe Meadows) was confirmed as a Site of Special Scientific Interest in May last year, and work is underway to improve its habitat and control the increase of invasive species such as Himalayan balsam which has resulted in a decline in tansy plants over the past few decades.

Recently another population of tansy beetle was discovered in in the East Anglian fens in July 2014 after a 40-year absence. The discovery at Woodwalton Fen National Nature Reserve (NNR) was significant as it demonstrates the resilience of the species when given the right conditions.

Natural England has been working closely with partners on the Great Fen vision to create new habitat around the NNR, and with the Tansy Beetle Action Group (TBAG) to study how best to improve conditions for the beetle. Work underway also includes a recent re-introduction at Wicken Fen.

Pot beetles are a fascinating group of petal and leaf-eating beetles that get their name from the protective shell-like ‘pot’ that the larvae live in, created using their own droppings.

Stoneflies, or Plecoptera – from the Greek ‘pleated wing’ – are an ancient group of insects, dating from 250 million years ago, with 2,500 known species worldwide.

Unsung inhabitants of the freshwater world, their larvae can grow to over 30mm in length, making them among the largest invertebrates found in fresh water. Due to their high oxygen requirements, the larvae are particularly sensitive to organic pollution.