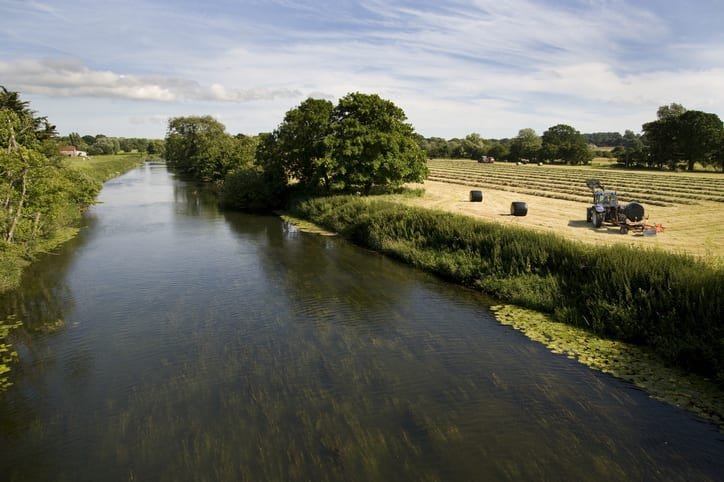 WWF, Angling Trust and Fish Legal have mounted a fresh legal challenge against the Department of Environment, Food and Rural Affairs (DEFRA) over its failure to tackle the damaging pollution to England’s rivers caused by agriculture.

The case, originally brought to court in 2015 by WWF, Angling Trust and Fish Legal, highlights DEFRA’s failure to use ‘water protection zones’ – a regulatory power available to them since 2009 – to actively combat diffuse agricultural pollution.

This form of pollution results from farming practices – it occurs when fertilisers, manure, pesticides or sediment are washed into rivers in the rain.

It can cause the contamination of soil, air and water environments and is a present threat to UK nature – including species such as allis shad, Atlantic salmon, freshwater pearl mussel and seagrass.

The three claimants are taking DEFRA and the Environment Agency back to court because they have failed to comply with a court order for over five years.

‘Freshwater habitats are some of the most vibrant on Earth, but they are in catastrophic decline right around the world. Nature is in freefall and the UK is no exception.

‘It’s regrettable that it takes a legal challenge to persuade DEFRA to clean up our rivers and restore our freshwater habitats to good health. Ministers have had the power to do this for over a decade; it’s imperative they act now and resource this activity accordingly – England’s vulnerable nature and wildlife cannot afford to wait any longer.’

This legal action comes in the wake of the publication of World’s Forgotten Fishes, a new report from 16 global conservation charities, including WWF.

The report exposes the dire outlook for the world’s populations of freshwater fish. One in three species are threatened with extinction and global freshwater biodiversity is declining at twice the rate of that in oceans or forests.

Burbot and sturgeon have vanished from UK freshwaters, while salmon has suffered significant declines since the 1960s, and the European eel remains critically endangered.

Much of that decline is driven by the poor state of freshwater habitats in parts of the UK, with just 14.6% of rivers in England achieving Good Ecological Status in the latest assessment.

This is mostly due to agricultural pollution such as nitrates and phosphorous, physical modifications to waterbodies, such as dams, and sewage.