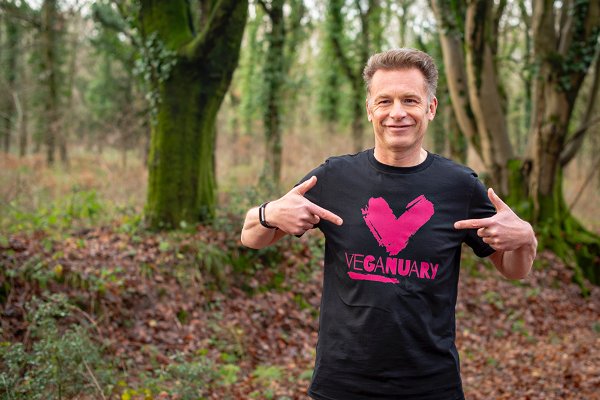 After COP26’s failure to address animal agriculture’s contribution to the climate crisis, Veganuary – the global pledge to try vegan for 31 days – is urging people to take climate action into their own hands and try vegan this January.

‘Veganuary’s mission is to make the world a kinder, safer, happier place for all, which makes their January campaign utterly irresistible. I’m in awe of every single person taking part for the climate, our rivers and oceans, forests and wild places, animals and people. You’re all angels.’

Chris Packham, who did Veganuary in 2019, is encouraging everyone who cares about climate change to take part this January.

A new study conducted by YouGov shows one-third (34%) of UK adults are either interested in trying or plan to try a vegan or plant-based diet.

8% of UK adults are already on a vegan or plant-based diet.

The survey also revealed that 35% of Brits say their perceptions of a plant-based or vegan diet have changed for the better in the past two years and 36% think eating a vegan or plant-based diet is an admirable thing to do.

‘Climate change is at the forefront of everyone’s mind and one key solution is at everyone’s fingertips – their fork.

‘Although changing our diets is crucial to cutting greenhouse gas emissions, it can seem daunting. Signing up to Veganuary makes it much easier as our free pledge is full of helpful tips and advice, including a seven-day low carbon meal plan highlighting simple swaps that slash the carbon footprint of classic British dishes.’

More than 582,000 people from 209 countries and territories officially took part in Veganuary last year and this year is set to be even bigger.

The campaign has expanded into India for 2022, and also has hubs in the UK, US, Germany, Argentina, Chile and Brazil, making Veganuary a global phenomenon.

For 2022 Veganuary produced its first-ever cinema ad which sees Bigfoot – voiced by Oscar-nominated actor James Cromwell – sign up to Veganuary to help cut his carbon Bigfoot-print.

Living alone in the woods, hardly seen by anyone, Bigfoot feels disconnected from the world and the scenes of climate chaos he sees on social media.

But when his best friend Snowman melts to the ground, Bigfoot realises he IS connected to the rest of the world and must do his part to save it. So, he decides to change his diet with the help of Veganuary.

James, star of Succession, Six Feet Under and the classic Christmas film Babe, says: ‘Do the planet and yourself a favour. Take the Veganuary challenge. Make a difference with little or no effort.’

The cheeky, fun ad, which was produced by Kilogramme Animation Studio, will air in more than 500 UK cinemas in the run-up to Veganuary.

‘Bigfoot may be mythical, but the need for urgent climate action is real. And as more people become aware of the incredible impact our food choices have on the health of our planet, attitudes towards eating vegan are changing. It is incredibly exciting to see one-third of Brits are interested in trying a vegan/plant-based diet, something that would have been inconceivable just a few years ago.

‘While shifting our diets may still seem daunting for some, signing up to Veganuary makes it much easier as our free pledge is filled with all of the tools and resources you need to make it fun and delicious.’

A recent survey found that six months after completing their one-month Veganuary challenge, 82% of those participants who were not vegan when they signed up had maintained a dramatic reduction in their animal product consumption.

Veganuary is free to join, and people can sign up at veganuary.com to receive 31 daily emails packed with nutritional info, delicious recipes, easy meal plans and helpful advice. Click here for more.