VW to meet with Greenpeace 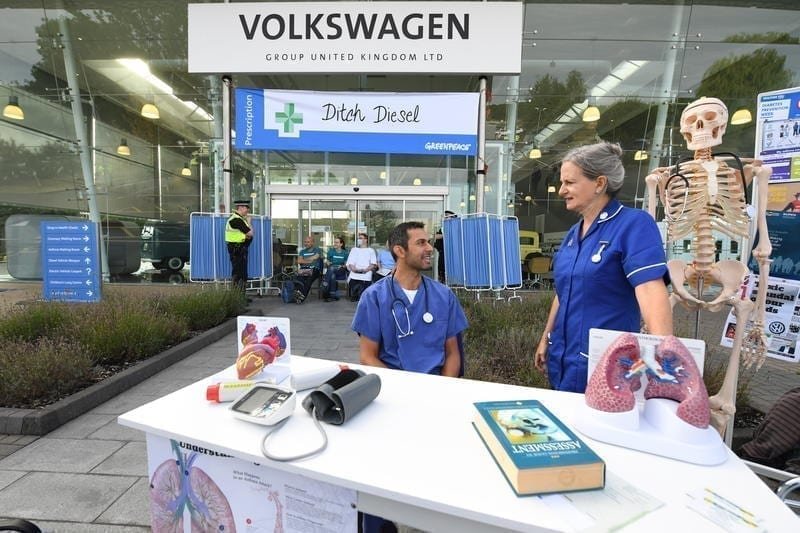 Greenpeace anti-diesel campaigners and medics have ended the peaceful blockade at Volkswagen head office, following an agreement from VW that it would meet with the campaign group. All the protesters left the site without being taken into custody.

VW previously held a global ‘no-meetings’ policy with Greenpeace about its ditch diesel campaign, but changed its policy as a result of the action yesterday (20 August).

More than 11,000 people emailed Paul Willis, MD of VW Group UK, in support of the action; they urged him to meet with Greenpeace to talk about diesel pollution.

The protestors arrived at Volkswagen head office on Monday morning, shut down the building and set up a diesel pollution clinic outside to offer health advice and lung function tests to staff.

Greenpeace is demanding that Volkswagen commits to ending the production of diesel cars, and pledges to go 100% electric.

Mel Evans, clean air campaigner at Greenpeace and one of the protestors there yesterday, said the campaign was designed to make Volkswagen listen, due to VW’s previous refusal to meet with the charity.

‘Because of the actions of our protestors and the thousands of supporters who joined in today by emailing Volkswagen, the company has now changed its policy worldwide and agreed to a meeting’, Mel said.

‘Diesel pollution is choking our towns and cities, and filling up our emergency departments. We won’t stop campaigning until Volkswagen does the right thing. It must face up to its responsibility for deadly air pollution and commit to end diesel production now.’

The anti-diesel blockade at VW HQ