‘We have the power’ 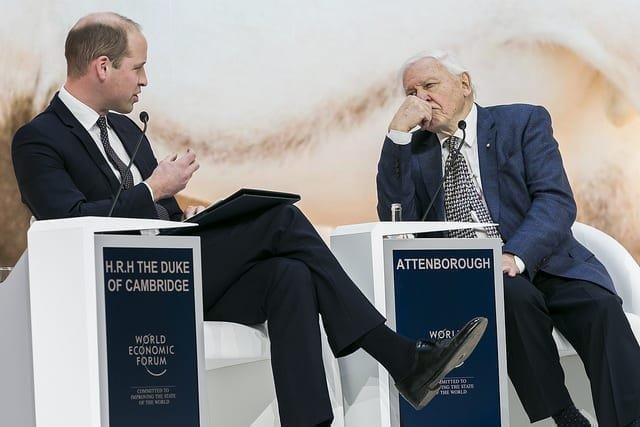 Campaigners have praised Sir David Attenborough and HRH Duke of Cambridge, who took to the WEF stage and called leaders to act to protect the natural world

Sir David Attenborough, in conversation with the Duke of Cambridge, has urged political and business leaders to protect the natural world. His call, made at the World Economic Forum (WEF) in Davos on Tuesday (22 January), reinforces the urgent need expressed by campaigners and organisations for a new deal for nature and people in 2020 – an agreement which would aim to halt and reverse the loss of nature and protect our planet.

WWF ambassador Sir David Attenborough joined the Duke of Cambridge in a conversation on-stage at WEF 2019, after Sir David was presented with the WEF Crystal Award on the opening evening.

They discussed Sir David’s decades of work, from his first-ever documentary series 60 years ago to his upcoming Netflix Original Documentary series Our Planet, which will be released on 05 April.

The pair also watched a short clip about the impact of climate change on the Arctic from the series. The ground-breaking, eight-part series –a collaboration between Silverback Films and WWF – will showcase the planet’s most precious species and fragile habitats.

Sir David spoke of his lifelong ambition to create societal affinity with the natural world through his work, and the need now for this affinity to translate into real, collective action to protect our planet. The pair discussed the urgent, environmental challenges our generation currently faces, and the opportunities for global leaders and citizens to tackle them – before it’s too late.

The Duke of Cambridge said: ‘People of my generation are beginning to step into positions of leadership around the world. The work to save the planet is largely going to happen on our watch.’

Sir David Attenborough later took part in a high-level panel discussion entitled ‘Safeguarding Our Planet and launch of Voice for the Planet’, which will be chaired by Al Gore, former Vice-President of the United States.

Other panellists are Anand Mahindra, chairman of the Mahindra Group; Akira Sakano, co-chair of Davos 2019 and Jacinda Ardern, Prime Minister of New Zealand. After the panel discussion, Sir David hosted a special screening of the upcoming Netflix Original documentary series Our Planet.

The call from Sir David Attenborough came shortly after the release of WWF’s latest flagship Living Planet Report, published in late 2018, which showed that population sizes of our planet’s wildlife have plummeted by 60% on average since 1970 – less than a lifetime.

The report highlighted overuse of natural resources on land and in the oceans, and agricultural activity, driven by human consumption, as the dominant causes of current wildlife declines and the destruction of forests, oceans and landscapes. It also identified climate change and pollution, including plastic, as significant and growing threats.

As a result, WWF warned that current efforts to protect nature are failing because they are not ambitious enough to match the scale of the threat the planet is facing. WWF is calling for political and economic leaders at the highest levels to commit to a coordinated, global plan of action to protect the planet.

Marco Lambertini, director general of WWF International, said: ‘There’s no doubt we are destroying our planet faster than ever, with catastrophic consequences for ourselves. But the fate of our world is not a done deal. We are at a critical point where the decisions we make have the potential to put us the path towards a better future. To do that we need political and business commitment at the highest level. That’s why we need a new Deal for Nature and People to unite us all in finding integrated solutions to the three biggest challenges of our time – climate change, restoring nature and feeding our global population.’

A new deal for nature

According to WWF, a new deal for nature and people would put the environment at the heart of our economic, political, social and financial systems and would integrate efforts to tackle climate change, biodiversity declines, threats to the environment of the high seas and development, via a series of vital international agreements in 2020.

The deal would focus on solutions that address the underlying drivers of environmental problems and requires action from governments and businesses to tackle their global footprint on the natural world. This must include, in a significant way, the private sector and industry as well as civil society and the development and adoption of science-based targets to work towards.

A major step-change can be made through leaders taking a stand for nature at the United Nations General Assembly. A top level political declaration at UNGA 2020, calling for nature’s recovery via a new integrated deal backed by heads of state, would show clear intent, lay out the need for an integrated approach and set out the elements for the new deal. This would embrace an ambitious new agreement under the Convention on Biological Diversity (CBD), with a clear implementation plan for medium and long-term goals for the recovery of nature.

Click here for more of the findings from WWF’s Living Planet report.