There’s only so much space on a cheese packet, so deciding how to use it to make your product stand out is a tricky business. It’s particularly complicated when you produce award-winning cheddar that’s won a string of accolades in the Global Cheese Awards. Even the French love it: they’ll have been importing Wyke Farms’ cheddar for 19 years this summer. Oh, and it’s made using 100% green energy.

If you tried to cram all of that information onto an envelope-sized rectangle then every supermarket fridge would need to come equipped with a magnifying glass. ‘From the research we’ve done, price and taste are the most important factors for customers – but environmental concerns come a close third.’ I was talking to Rich Clothier, managing director of Wyke Farms and third-generation cheesemaker. ‘Farming has got to change. If it doesn’t, loads of people will stop eating meat and dairy because they’ve watched Cowspiracy and they’re concerned about the environmental impact of farming.’

Nestled in rolling Somerset hills, Wyke is a 150-year-old family cheesemaking business. From its 1,500 acres and 1,000 milking cows it processes up to 300 million litres of milk per year and makes 15,000 tonnes of cheddar, accounting for 5% of the UK market. The family recipe has bagged countless awards for Wyke, but an entirely different kind of success was the reason for my visit to the farm in June.

Rich’s vision is for Wyke to be a sustainable working farm, where all of the electricity and gas is produced by solar and biogas generated from farm and dairy waste that has no other value. It’s a bold mission, and one Rich and his team have been quietly pursuing while the awards continue to roll in.

‘As prices drop, lots of farmers are responding by saying OK, I’ll buy another five cows so I can produce more milk and make up the losses’, Rich said. ‘Government policy is trying to force farmers down this route. What we’re saying is, take that £5,000 and instead of buying more cows, buy solar panels!’ 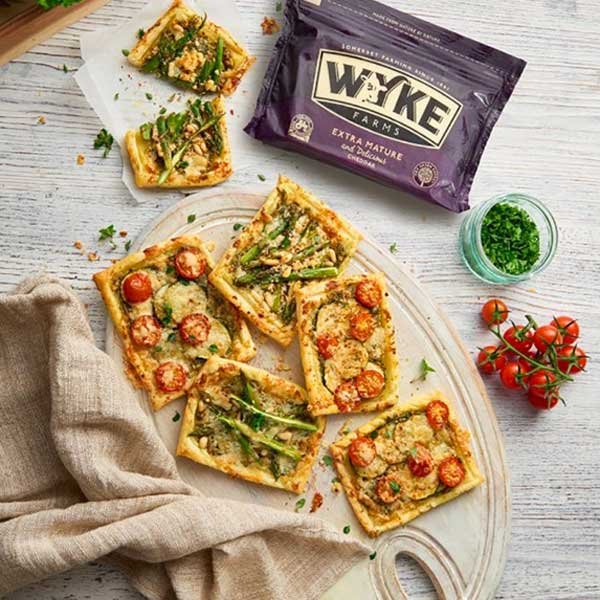 All dairy farms need to cool milk from body temperature to 2-3ºC as quickly as possible; at Wyke, the tank of iced water used to get the milk’s temperature down is powered by solar panels on the barn roof. ‘I always show other farmers this set-up’, Rich told us. ‘Lots of farmers have gone off to do the same on their own land. It’s a no-brainer. Even if they’ve only got space for a small array, they’ll save money because they’ll use all the energy they generate.’

That’s not all Wyke Farms is doing to encourage farmers to switch to solar: since last summer, it has offered preferential rates to suppliers who use renewables, and 17 out of around 100 farms are now receiving an extra 2p per litre (£2,000 for an average farm) from Wyke Farms as a result.

These neat solutions are helping local farmers start the transition to sustainable agriculture – but the thing that makes Wyke really stand out is hidden in a valley 1.5 miles away, landscaped in such a way that it’s almost invisible from the road.

Wyke Farms’ anaerobic digester (AD) plant, installed in September 2013, consists of three huge tanks topped with green domes stretched taut by the pressure of methane that rises up inside. From behind the trees the green mounds could easily be an extension of the Somerset hills that roll around them – but get up close and you’ll appreciate the technical genius of this mammoth operation.

‘We no longer have any waste’, Rich explains, ‘because waste is fuel.’ Excess lactose from the cheesemaking process is pumped underground to the AD plant, where it’s mixed with silage, apple pomace from local cider producers and waste bread. Everything’s got a calorific value and it all needs to be calculated. It’s an exact science and finding the perfect recipe has required lots of trial and error – not least because the ingredients keep changing.

‘We’ve even taken reed bed waste from a local RSPB reserve’, Rich says, ‘and we’ve bought straw from rape crops from local farmers. It’s 60% methane and it’s just left in the field to rot!’
Inside the monster tanks, methane is released as the various wastes are agitated and combined. After rising to the top of the domes, it’s pumped through to a combined heat and power plant (CHP) where it’s burnt to create heat and electricity. These handy byproducts are used to run the AD plant and to produce heat for the dairy.

Because the dairy uses more gas than electricity, the next game-changer at Wyke was the addition of a biogas upgrader. ‘Biogas is approximately 50% methane and 50% CO2’, Rich explains. ‘It’s very happy in the engines on the farm, but it can’t compete with fossil fuels when it comes to calorific value.’

The gas upgrader essentially cleans up the biogas so it can be used on the farm, with any excess sent to the grid to power the local community. It takes out the CO2 and injects an odour into the otherwise undetectable methane.

The addition of the gas upgrading plant in December 2014 allowed Wyke to become 100% self-sufficient, and to supply other farms and businesses. ‘The CO2 we’re extracting can be used as a refrigerant’, Rich tells us. ‘Sainsbury’s uses it in its fridge gas.’

Rich has always wanted the farm to be green, but the vision has only recently become attainable. ‘You can only be as green as the technology that’s available’, he says.

A perfect example is the way Wyke Farms’ produce is transported; the farm runs three electric cars and in the future could run its tankers on compressed natural gas (CNG) produced by the biogas plant. Having a compression plant on site would also give Wyke Farms the opportunity to invest in tractors powered by methane – resulting in complete energy independence on the farm.

‘In the future, sharing of gas power between local farms could be a possibility, particularly where you have a big plant like ours’, Rich says.

‘With 0.3p-0.4p in every penny of milk transport cost being fuel cost, providing a local filling point for neighbouring farms makes economic sense. The associated savings from methane-powered tractors could help dairy farmers reduce their costs, which can only be a good thing. The potential savings are huge.’

Click here to find out more about Wyke Farms’ award-winning cheddar and its green credentials.

Home is where the heat is