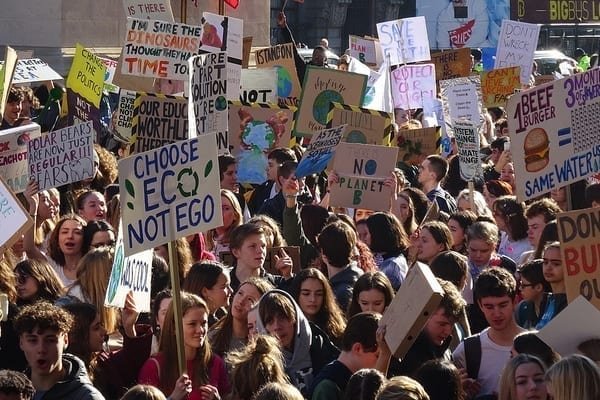 Today, tens of thousands are expected to participate in the biggest ever youth climate strike

Today (15 March), students and young people will walk out of their classrooms and lecture theatres and call on governments and those in positions of power to act urgently to address the climate crisis.

This is the second UK walkout, following on from the unprecedented day of action on 15 February which saw over 15,000 students attend strikes and demonstrations in more than 64 towns and cities. The second iteration of Youth Strike 4 Climate is expected to be larger in size and scale, with strikes registered in over 100 towns and cities spanning the breadth of the UK.

Driven by what the students have said is an ‘alarming lack of government leadership on climate action’, young people are determined to highlight the need for positive change to avert impending climate breakdown.

This lack of leadership was recently reinforced after only a handful of MPs attended the first climate change debate held in Parliament in two years, attracting widespread criticism.

‘Young people in the UK have shown that we’re angry at the lack of government leadership on climate change. Those in power are not only betraying us, and taking away our future, but are responsible for the climate crisis that’s unfolding in horrendous ways around the world. The UK has been relatively shielded from the effects of the crisis so far, but those least responsible for contributing to climate change are already suffering the worst effects. It is our duty to not only act for those in the UK and our futures, but for everyone. That’s what climate justice means.’

A GLOBAL DAY OF ACTION

The UK demonstrations on 15 March are part of a wider, global day of action that will see young people in over 90 countries striking from education. Back at home, sizeable events are set to take place in most major towns and cities including London, Sheffield, Leeds, Manchester and Brighton.

UK students are putting pressure on their own government as well as highlighting the ways in which people are affected by climate change, with varying levels of severity around the world.

‘It really is time that the government, irrespective of whoever is in power stands up, put up their hands and admit that they severely failed to address the climate crisis so far. The scientists have been telling governments, policy-makers and big business that we need to realign all sectors of the economy along environmental principles, yet they’ve been dragging their heels and now we’re left to pick up the pieces.’

Those taking part in the action are demanding that the government declares a state of climate emergency and communicates the severity of the ecological crisis to the general public.

Campaigners want the curriculum to be reformed to address climate change as an educational priority. They are also calling for youth voices to be included in policy making and for the voting age to be lowered to 16.

‘Over the previous months, young people have shown their ability to act in solidarity with one another across borders and international boundaries. We’re unified in our common struggle to avert climate breakdown and call on governments to address the climate crisis. We’re proving every day that the world’s youth are dynamic, resilient and creative, and governments could learn a lot from our movement.’

Click here to find out more about UKSCN, including its mission and demands.