‘A club for citizens’ 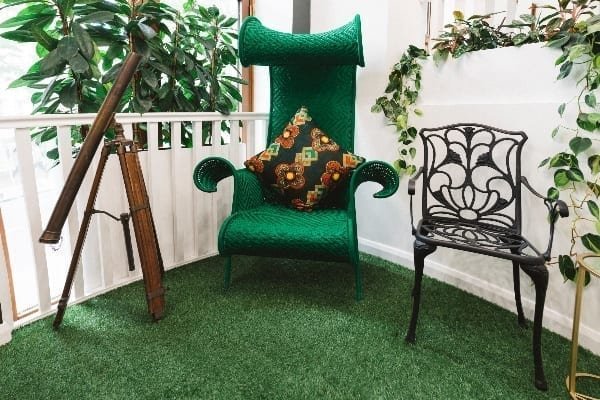 ARBORETUM has been described as ‘London’s first environmentally friendly members’ club’ and ‘a club for citizens’ – but its founder, Ronald Ndoro Mind, has a very simple intention: to bring together the people who are fighting to save the world.

‘Mostly, people only interact within their own groups’, he tells us. ‘If we want to solve the big existential challenges like climate change, we need different perspectives: we need the violinist to interact with the scientist and the poet with the banker. We need a convergence of thought directed towards a common goal.’

For Ronald, the solutions we seek are usually right there – just within reach. They remain elusive only because we haven’t yet brought the right people together under a deliberate and common purpose of exchange and solution.

ARBORETUM facilitates precisely this meeting of minds: its members are people who are taking positive action to address the urgent crises facing the planet. They are also people who want the best for themselves and the society they live in.

‘Collaboration is essential if we want to make things happen’, Ronald tells us. ‘At ARBORETUM you can interact with like-minded people, share stories and exchange solutions.’

For a modest membership fee, anyone interested in ARBORETUM’s purpose can become a member and access facilities including work space, fitness and wellbeing space, sleep pods, bedrooms, walking treadmill desks, a podcast studio, meeting rooms and event spaces – all in central London.

Ocean plastics and the P.E.A.s

In addition to its work and wellbeing space, ARBORETUM crucially hosts events where people can intermingle and share ideas. Every quarter a three-day, immersive Green Utopia brings people together to learn, share and collaborate.

Ronald is most looking forward to the SHIFT sessions by Emily Penn, an ambassador for Sky Ocean Rescue who is working to solve the ocean plastics issue. ‘I feel that destruction to the ocean and the life within it is one of the most critical challenges our planet is facing’, Ronald tells us.

The P.E.A. (People. Environment. Achievement.) Awards on 13 November 2019 is another event on Ronald’s radar; ‘This awards ceremony is everything that ARBORETUM is about’, he says. ‘It’s the UK’s leading sustainability awards, honouring the individuals and teams behind the products, services and businesses that are changing the face of our planet. I recall going to the very first P.E.A. Awards as a guest eight years ago, and I am delighted that it’s still going – and bigger than ever – in time for us to be able to collaborate.’

ARBORETUM is located on Charing Cross Road in the centre of London. ‘If this were Monopoly’, Ronald says, ‘we would be the piece that you would want to build your house and hotel on.’

But the listed building has presented ‘certain constraints’ regarding the sustainable design features that Ronald set his sights on. ‘Energy use is a particularly tough one, plus trying to retrofit renewables’, he says. ‘Getting clean air internally has also been difficult due to the challenge of installing ventilation to circulate the air. Becoming zero waste is also a test given our location. We have made some positive strides in all these areas, but they’re all still a work in progress.’

Ronald is most proud of the just-launched Green Quarter initiative, through which ARBORETUM has partnered with more than 30 businesses to combine waste collection and recycling. ‘We have also added a lot of trees and plants that have significantly improved the general air quality of the area’, he says.

The upcycled old school gym flooring is Ronald’s favourite design feature; ‘it is full of history and resonates with our purpose – which is one of education for a better tomorrow’, he tells us. ‘I also love the indoor plant life throughout as it gives a really distinct feeling of cleaner air and tranquility when you step in from a busy, congested and polluted Trafalgar Square.’

Ronald has launched an environmentally aware members’ club at a time when citizen concern for the planet is at an all-time high – but it’s not just a shrewd business move.

When he set up LIBRARY members’ club over six years ago, Ronald employed disadvantaged teenagers and worked with a charity, Out of the Dark, to recycle and upholster furniture that had been thrown away.

Ronald and Chris Livemore set up a not-for-profit sustainability consultancy called Ibex Earth back in 2007, when environmentalism was far from being on trend. ‘Our purpose was to serve as a conduit between environmental charities and corporates looking to better their CSR’, Ronald explains.

Around the same time, Ronald also helped his mother set up a children’s charity for orphaned children in Africa. ‘I’m definitely enjoying the trend and am up for riding the wave’, he tells us, ‘but sustainability and giving back have always been at the core of everything I do.’

Choosing how to revolt

Ronald’s intention is always to do more, but for now the focus is on ARBORETUM being a purpose-driven business; should it prove popular, then his commitment is to meet the demand. The result could be a string of purpose-led members’ clubs that turn an elite and exclusive model on its head.

‘Sometimes in order to change something for the better, you have to kill it off entirely and start on a fresh slate from the ground up, which can be brutal’, Ronald tells us. ‘And sometimes in less harsh circumstances it makes a lot more sense to work from within the establishment and effect positive change. The latter option is more gradual and less severe, allowing for better and less noticeable positive transitions.’

Ronald’s new blueprint for a members’ club that unites minds – through a network not of wealth but of conscious intent – could help to create a better society and planet. ‘I think coming from a minority background I have always felt excluded – even when I was included’, he tells us. ‘I believe creating an organisation that is all-inclusive is important; that is where we can get the best out of our society. When you can see the who in people, and not the what, I believe you can accomplish a lot more.’

Click here to check out upcoming events or to join the ARBORETUM community.