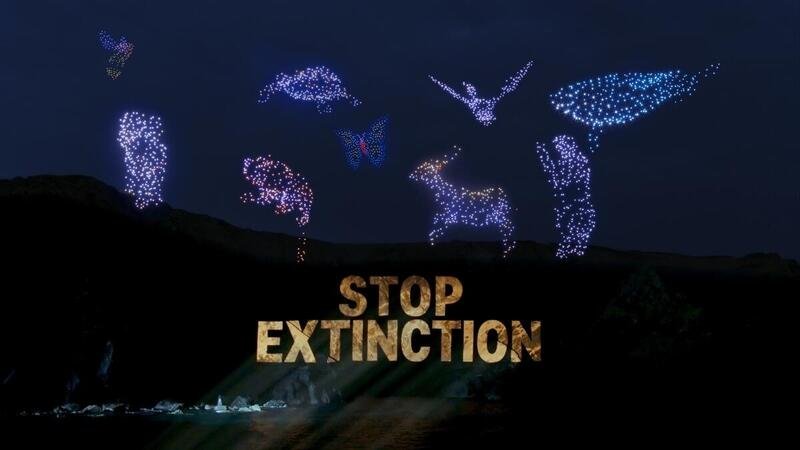 The UK’s largest swarm of drones, used to create breathtaking 3D moving images of iconic animals, is seen descending on Cornwall in a groundbreaking new Greenpeace film, demanding that world leaders gathered at the G7 ‘ACT NOW’ to tackle the climate and nature crisis.

The spectacular drone displays used artificial intelligence software to choreograph the drones’ movement to form 3D animals and words, interlaced with projections. It was created for Greenpeace by Celestial, the drone display company behind Scotland’s Hogmanay 2021 New Year’s drone show.

A total of 300 illuminated drones were used to create the displays – twice as many as were used for the Hogmanay performances – making it one of the largest drone shows ever produced in the UK.

The film’s music was created by producer and Emmy-nominated composer Hannah Peel, who has scored music for film, theatre and television, including Game of Thrones. She worked with the Ulster Orchestra to create the music for the film.

The two-minute film starts with a projected image of a turtle swimming across a dark cliff face of Mullion Cove in Cornwall, while a child narrates, ‘Once upon a time, world leaders gathered in Cornwall to decide our future’.

It then moves on to show projections of other animals, including a jaguar, tuna and bee, which morph, one by one, into ‘animal spirits’ created by hundreds of illuminated drones, moving across the sky.

Children narrate the film with powerful messages of hope, such as, ‘I hope it’s not too late, I hope the grown-ups in charge wake up’ and ‘I hope they defend the forests for the animals and people living there’, while an increasing number of drone animals race independently across the sky towards Cornwall.

‘This film is a beautiful amalgamation of art, activism and cutting-edge technology but its message is simple. World leaders must act now if we are to tackle the climate and nature crisis.

‘The G7 cannot be another target-setting exercise resulting only in wasted time, political chest-thumping and more empty promises that might as well be written in the sand of Carbis Bay Beach.

‘We need bold commitments but they must also be urgently delivered. World leaders have the power to tackle the mounting but interconnected crises we face, but only if they act now.’

The film reaches a crescendo as the drone animals gather en masse above a cliff in Cornwall, where the G7 is being held, as one child says, ‘I want our leaders to do their jobs and fight for the planet’.

In the final sequence of the drone display, as the last child narrating the film says, ‘hope comes from action, not words’, the drone animals morph once again into the words ‘ACT NOW’.

The film ends with footage from a protest staged by Greenpeace activists at RAF Mildenhall as US President Joe Biden arrived in the UK on Wednesday.

As the President was coming in to land on Air Force One, activists unfurled a banner also carrying the ‘ACT NOW’ message.

Greenpeace is using the film and action taken ahead of the G7 to call on the leaders of seven of the largest economies and the EU to raise their ambitions for tackling these crises and take meaningful action in order to halt the devastation that they’re causing.

Campaigners are calling for the G7 nations to spearhead a green global recovery from the pandemic to limit global temperature rises to 1.5°C in order to avoid the most devastating impacts of the climate crisis.

This includes an immediate ban on all new fossil fuel projects and a strategy for ending fossil fuel use altogether, with proper support for workers and communities to transition to jobs in green industries, like renewables and energy efficiency.

Leaders must make good on, and increase, the promised $100bn per year in climate finance to countries hardest hit by the climate crisis, as well as cancel all debt for the global south and honour international aid commitments.

Lastly, Greenpeace is demanding that all leaders commit to strongly protecting at least 30% of land and sea by 2030, respecting the rights of indigenous people and local communities who depend on them, with legally binding targets in domestic and international law to begin to significantly reverse the decline of nature by 2030. This should start now with immediate action to halt deforestation.