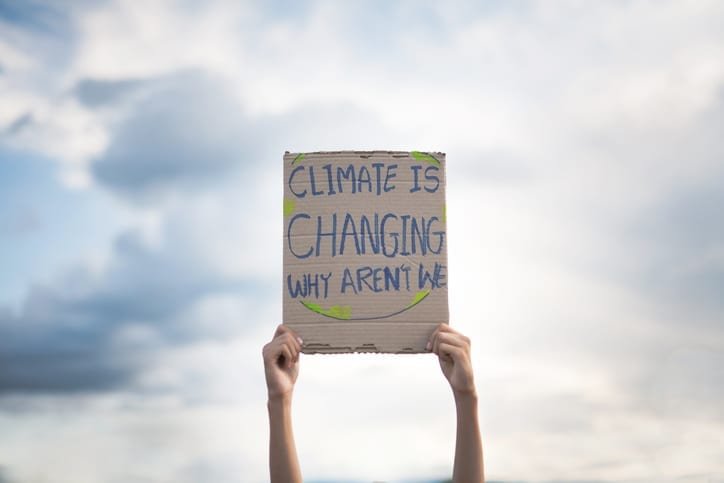 World leaders responding to the pandemic must not forfeit action on climate crisis – or risk failing children and future generations further, Amnesty International said ahead of a global day of school strikes against climate change planned for 25 September.

Climate change was cited as one of the most important issues of our time in a survey of more than 10,000 young people published by Amnesty International just months before the pandemic turned the world upside down.

To allow us to limit global warming to 1.5°C, and avoid the most catastrophic effects of climate change, governments agreed to submit updated pledges to reduce emissions and mitigate the climate crisis.

Globally, only 12 countries have submitted plans so far, with the deadline of the end of the year fast approaching.

The current state of play indicates that many wealthy countries with a long history of fuelling climate change and states with the highest levels of emissions are not only falling behind in their plans but taking measures that will set climate action back several years.

Only four of the 12 countries that have submitted updated plans are wealthy industrialised countries.

The UK, and Canada, have yet to follow suit, while the US and Australia won’t put forward updated pledges at all. The European Commission is proposing to European leaders an insufficiently ambitious reduction in emissions by 2030 (55% below 1990 levels).

Other countries with high levels of emissions, such as China, India and Russia, respectively responsible for approximately 28%, 7% and 5% of current global greenhouse gas emissions, have provided no indication that they will increase their targets any time soon.

‘2020 was supposed to be the year of climate action, but tragically it has become instead the year of Covid-19. The impact of the pandemic cannot be underestimated, and recovery will take time. However, climate inaction must not be the political payoff. Pandemic recovery efforts have seen emissions reduction targets fall by the wayside in a staggering act of political myopia, in light of the fact that global warming triggers disasters, diseases and other impacts of incommensurable proportion.’

In the last few months several countries – including the US, Canada, UK and Russia – have allowed fossil fuel companies, the aviation industry and other carbon-polluting companies to benefit from economic stimulus measures, such as tax rebates and loans.

These have largely been granted with no conditions attached, meaning that these industries can continue to function and even expand without having to commit to reducing emissions or using the government support only to support workers.

‘The pandemic has shown us that many governments are capable of exactly the fast, decisive action that we need to address the climate crisis. When the stakes are so high, even those who benefit from the status quo are willing to overturn it.

‘People have supported reasonable protection measures brought in by governments to protect their communities; even when they involve drastic changes to their daily lives. If governments are capable of pouring billions into furlough schemes and bailing out companies – then they should be capable of making the obvious decision to urgently phase out fossil fuels.

‘Leaders must avoid pandemic-induced tunnel vision and commit to the long-term wellbeing of their people. Covid-19 has driven many to the very edge of their capacity to survive and tested our collective resilience. But it has also renewed our determination for a radically different future – a more just, equitable and sustainable world that is fit for our children and grandchildren.’

The climate crisis and human rights

The climate crisis is one of the biggest human rights issues of our time, affecting the rights of millions to food, water, health and life.

Millions of people are already suffering from the disastrous effects of climate change; devastating floods submerging one third of Bangladesh and unprecedented wildfires on the US West Coast are just two of the most recent examples.

Children with their under-developed immune systems, and particularly those most marginalised, are especially vulnerable to the health impacts of climate change, from malnutrition due to changes in crop yields to mosquito-borne diseases like malaria and death from heatwaves.

‘Amnesty International stands with all children and young people taking part in climate strikes. Children globally have faced unimaginable disruption to their lives, education and health as a result of Covid-19. That they must take more time out of school to demand that adults do the right thing is utterly shameful, but young people know only too well the unthinkable consequences of climate inaction to their lives and human rights.’

As world leaders are gathered for the United Nations General Assembly and G20 energy ministers are set to meet on 27 September, Amnesty International is calling on governments to put climate action and human rights at the centre of their pandemic recovery plans.

They should adopt plans to promote zero-carbon economies by, for example, stopping unconditional bailouts and subsidies to fossil fuel companies and investing in companies that deliver a just and human rights-consistent transition to a decarbonised economy.