Action on peat and trees 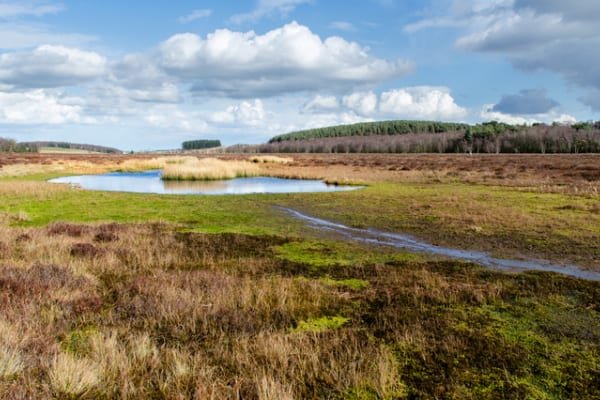 Plans to boost biodiversity, protect our peatlands and create new woodlands were set out yesterday (18 May) by Environment Secretary George Eustice, in a speech outlining the government’s ambitions to restore nature and safeguard our environment for future generations.

Speaking from Delamere Forest, he announced new measures to tackle climate change and the biodiversity crisis and deliver our net zero commitment, including steps to take forward recommendations from the Dasgupta Review on the Economics of Biodiversity.

He also announced amendments to the Environment Bill, including a new legally binding species target for 2030 which will drive action to halt the decline of nature and wildlife.

‘We will be amending the Environment Bill to require an additional legally binding target for species for 2030, aiming to halt the decline of nature.

‘This is a huge step forward, and a world leading measure in the year of COP15 and COP26 as we build back greener from the pandemic. We hope that this will be the Net Zero equivalent for nature, spurring action of the scale required to address the biodiversity crisis.’

The government’s new peat action plan sets out a framework to improve the management, protection and restoration of both our upland and lowland peatlands.

As England’s largest carbon store on land, peatlands play a vital role in trapping carbon, helping to control flooding and encouraging plants and vegetation that act as homes for wildlife.

When damaged, for example when mined for compost, peatlands can end up emitting their carbon dioxide into the atmosphere.

A new Nature for Climate Peatland Grant Scheme will support the restoration of 35,000 hectares of degraded peatland in England, backed by over £50 million between 2021 and 2025.

The environment secretary also confirmed that the government will ban sales of peat products by the end of this Parliament, subject to public consultation this year.

Plans to treble tree planting rates in England during this Parliament will be funded through £500 million from the Nature for Climate Fund.

‘Today, I am also outlining measures to better protect our existing trees and woodland and set us on the path to ensure that we have at least 12% of woodland cover by the middle of the century.

‘It is our ambition that all woodlands in England will improve the environment, acknowledging that our woods and trees are vital habitats. The iconic oak tree alone supports 2,300 species, of which 326 are dependent on oak trees for their survival. Trees are also important for sequestering carbon. Indeed woodlands currently sequester about 4% of the UK’s gross emissions.’

At least three new community forests will be created though a new programme, Trees for Climate, to bring more people closer to nature and enable the planting of 6,000 hectares of new woodland by 2025, building on the 500 hectares planted in the last year.

To tackle the loss of native species in this country a new Species Reintroduction Taskforce will work on the reintroduction of species which have been lost to England – such as wildcat – and the introduction of declining species into new areas to help populations recover.

This could include the reintroduction of beavers in some parts of England. The government will publish a consultation this summer on its approach to this and the management of beavers in the wild.

The taskforce will bring together experts, landowners and NGOs to share knowledge, assess and prioritise species for reintroduction and to develop partnerships for delivering high-quality projects.

‘A new target for Nature recovery enshrined in law will be a powerful new driver for coordinated action, as was found on cutting greenhouse gas emissions following the passage of the Climate Change Act. Meeting a stretching Nature target can be done, so long as we can join up different policy areas, such as farming, housing development and infrastructure, while also improving overall environmental quality in terms of air and water pollution.

‘Natural England stands ready to work across Government to help make it happen, including through the delivery of an ambitious Nature Recovery Network that will see not only the improvement of our vital protected areas and the restoration of lost habitats, including woodland, wetland and heaths, but also the return of lost species.’

A nature and climate emergency

Yesterday’s announcements are part of the government’s commitments to drive international ambition on action to tackle climate change and work towards nature-based solutions ahead of the G7 Climate and Environment Ministers’ meeting taking place this week, the upcoming 15th UN Biodiversity Conference of the Parties (Convention of Biological Diversity COP15) and the 26th UN Climate Change Conference of the Parties (COP26), which will be hosted in Glasgow later this year.

In the run-up to the summit, the UK is focused on four goals to drive progress: securing global net zero, protecting communities and natural habitats from the impacts of climate change, mobilising finance and working together to accelerate action.

The secretary of state and the chairs of Natural England and Forestry Commission spoke from Delamere Forest at an online event hosted by The Wildlife Trusts.

‘Today we face a twin nature and climate emergency – these crises are entirely interlinked and one cannot be tackled without addressing the other. It’s essential that we stop nature’s decline and restore 30% of land and sea by 2030 – doing so will help wildlife fight back and enable repaired habitats to store carbon once more. Vast, landscape-scale restoration projects need funding by government to help us reach this target because, at the moment, only 10% of our land is protected for nature and only half of this is in a good state. Nature Recovery Networks need to be at the heart of our future planning system so that our new nature places are carefully mapped out, joined up and put where they will work best for nature and people.’

Yesterday’s announcement follows the recently launched Queen’s Green Canopy – a unique, UK-wide tree planting initiative created to mark Her Majesty’s Platinum Jubilee in 2022, by inviting people to Plant a Tree for the Jubilee.