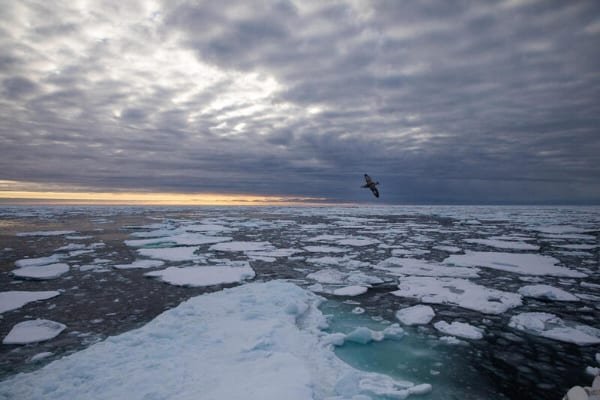 The National Snow and Ice Data Center has recorded that the extent of Arctic summer sea ice has dropped below 4 million square kilometres.

According to the National Snow and Ice Data Centre, the 2020 Arctic sea ice minimum extent was likely reached on 15 September at 3.74 million square kilometres.

This is the second lowest level recorded in 42 years of continuous satellite monitoring. Only in 2012 was there a lower extent of ice.

The Arctic sea ice has already lost two-thirds of its volume and there has been a consistent decline in sea ice extent over the past decades.

In the first week of September, sea ice extent took a sharp downward turn, exceeding the pace of decline for any previous year during that period. Pulses of warm air from north-central Siberia are responsible for the late downward trend.

‘Step up and lead the way’

The Greenpeace ship Arctic Sunrise – with a crew of campaigners, activists and scientists – is in the Arctic to document the sea ice minimum and study marine life in the region.   Speaking from the edge of the sea ice, onboard the Greenpeace Ship Arctic Sunrise, young environmental activist Mya-Rose Craig, also known as ‘Birdgirl’,  said: ‘I’ve only been alive 18 years and yet those years have seen 18 of the lowest sea ice minimums on record.

‘Today I looked out at the sea ice edge and bore witness to the second lowest recorded. This wake up call is becoming deafening. But the UN Biodiversity summit at the end of the month gives Boris Johnson a chance to heed it.

‘We need the Prime Minister to step up and lead the way at home and internationally. That means continuing to push for a strong Global Ocean Treaty, and to make sure that push is credible by putting at least 30% of the UK’s waters off limits to destructive activities as soon as possible.

This Friday (25 September) marks the one year anniversary of the release of the Special Report on the Ocean and Cryosphere in a Changing Climate (SROCC), from the International Panel on Climate Change.

The report makes it clear that many of the extreme weather and climate events we are witnessing right now will continue to get worse unless urgent action is taken to reduce our global greenhouse gas emissions.

The number of extreme fires in the Arctic is unprecedented. From the Russian Arctic to the Pacific coast of the United States, the region is witnessing devastating wildfires this year, resulting in a new record for CO2 emissions, as well as the massive loss of infrastructure, habitat and wildlife.

‘The rapid disappearance of sea ice is a sobering indicator of how closely our planet is circling the drain. As the Arctic melts, the ocean will absorb more heat, and all of us will be more exposed to the devastating effects of climate breakdown.

‘The Arctic ice cap is a frozen ocean in urgent need of protection, and world leaders at the UN Biodiversity Summit need to understand the role of oceans in tackling the climate crisis. Healthy oceans are crucial for some of the most marginalised people across the globe who are being impacted by ocean destruction and climate change. We need to hit the reset button right now on how we look after each other and our planet by protecting at least 30% of our oceans by 2030 to help our planet cope with the climate breakdown.’

Over the last three winters, air temperatures in the central Arctic were 6°C above average. This year the Arctic Circle reached 38°C and a record-breaking heatwave in the Siberian Arctic was made at least 600 times more likely because of human-caused climate change.

The melting of polar glaciers and ice sheets is now the largest contributor to global sea level rise.  In 2019, Greenland’s ice sheet lost a record amount of ice.

This summer, Canada’s last fully intact Arctic ice shelf – The Milne Ice Shelf at the fringe of Ellesmere Island – collapsed. SROCC predicts as many as 1 billion people will be displaced by global sea level rise by 2050.

Healthy oceans keep carbon safely stored out of the atmosphere, helping to reduce the impacts of the climate crisis.

By protecting at least 30% of the oceans with a network of sanctuaries, marine ecosystems can build resilience to better withstand rapid climatic changes.

Scientists have identified the Arctic as one of the priority areas needing protection as part of a global network of ocean sanctuaries because of its vital importance to climate stability.  The Greenpeace ship tour coincides with the United Nations  Summit on Biodiversity where marine protection should be front and centre to any discussions about protecting biodiversity.

‘The Arctic is in meltdown. The loss of sea-ice alongside raging forest fires in Siberia and the melting of the Greenland ice sheet are amongst the most visible and dramatic signs of the climate crisis we face. That has profound implications for the iconic species of the ice, from walrus to polar bears, and for the people who call the Arctic home.

‘But what happens in the Arctic doesn’t stay in the Arctic. The UK is the Arctic’s closest neighbour and these extreme events affect us all, from changes in weather to increasing sea levels.

‘If the UK is going to show global leadership on tackling the climate crisis at COP26 in Glasgow next year, the government needs to drastically and urgently raise its ambition.’