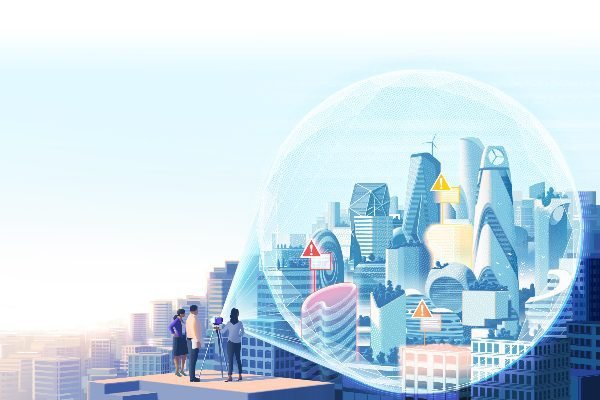 As the world’s leaders gather in Glasgow for COP26, they’re focusing on the planetary-sized problem humanity faces: the destabilisation of our climate.

But, says Iggy Bassi, founder and CEO of Cervest, that colossal problem is actually made up of billions of individual, inter-connected problems: our buildings and bridges, forests and factories.

These ‘problems’ – our most important assets – are contributing to the climate crisis, overburdening ecosystems and emitting climate-wrecking CO2.

Just as critically, they’re also vulnerable to the impacts of our increasingly volatile climate. But Cervest, creators of the world’s first AI-powered Climate Intelligence platform, believes they’re the key to unlocking resilience.

Getting beyond net zero

Decarbonisation tops the agenda at COP26, but Iggy’s focus is on catalysing global adaptation of the assets we depend on. ‘Decarbonisation is critical’, he says, ‘but on its own, it is insufficient.’

Historical greenhouse gas (GHG) emissions have locked us into decades of accelerating climate volatility — even if we were to reach net zero tomorrow.

In the coming years, every asset, built or natural, will be affected by increased extreme weather events like flooding, droughts and heatwaves. They costs us billions now – and will cost trillions in the future.

‘Humans have operated on the basis that nature is free and will always serve us’, Iggy explains; ‘but nature is biting back in big ways.’

The urgency is clear: a Cervest survey of 800 US and UK companies in September 2021 found that nearly 90% of respondents’ physical assets had been impacted by at least one extreme weather event in the last five years.

Despite this, companies are missing the bigger picture by failing to tackle physical risk. 80% of the businesses Cervest surveyed emphasise transitional risk over adapting to physical risks, with 75% aiming to become net zero between 2030 and 2040.

‘Businesses cannot expect decarbonisation efforts alone to minimise their exposure to climate risk’, Iggy says. ‘They need to understand how to adapt with climate change and build resilience into their strategy.’

This approach has exponential benefits that reach far beyond the individual factories, farms, power stations or train stations themselves. ‘The most effective levers we can pull to not only decarbonise but also ensure our resilience’, Iggy reveals, ‘are the ones our assets are already hardwired into: the world’s financial and regulatory systems. If we can change the way we see, quantify and make decisions on billions of assets, we will fundamentally rewire those systems to be climate resilient.’

To do this, businesses, governments and financial institutions require clear, science-backed analysis of climate risk across possible future scenarios. It must be standardised, and derived from a single trusted, transparent – and shared – source. That, says the Cervest founder, is Climate Intelligence.

Knowledge: the root of change

The need for Climate Intelligence first became clear to Iggy when he was operating a sustainable agribusiness in Ghana. Volatile weather was making harvests increasingly unpredictable, but no one could explain why.

Iggy turned to science for the answers, but couldn’t find the data to help explain climate risk for individual enterprises like his.

He started by joining forces with Imperial College London and The Alan Turing Institute, with the idea of combining the world’s leading climate and statistical science to create a unified framework for assessing asset-level climate risk across the globe.

His approach was simple: we can’t fix what we can’t see or understand. Focusing on assets would make the problem concrete, comprehensible and urgent – and empower everyone to take action.

The idea may have been simple, but the task was not. The Earth’s climate is a highly complex, interconnected system, and building reliable data models that can predict its behaviour has taken decades of painstaking observation and analysis.

The result? The company’s first products: EarthScan™, which quantifies, standardises and rates risk, producing decision-ready insights for any asset, anywhere, and EarthCap™, which feeds Climate Intelligence into financial transactions. This enables businesses, governments and NGOs to explore the impact of climate volatility on their assets, now and in the future – and to act to de-risk their decisions and seize opportunities.

As Iggy says, ‘from design to retirement, we can – for the first time – make climate-intelligent decisions right across an asset’s lifecycle.’

At the heart of Climate Intelligence is the principle that it must be available, actionable and understandable to anyone.

Climate data – previously complex, fragmented or siloed – has historically been the preserve of those academics trained to understand it, or the few companies interested in (and able to afford) bespoke reports. Cervest transforms that data into dynamic insights that are openly accessible to every person on the planet – from consumers to investors and corporate executives – creating a powerful network effect.

‘Climate Intelligence makes climate risk personalised and actionable – and completely visible – for everyone’, says Iggy. ‘When all stakeholders can see the projected impact of climate change on the same physical assets, there will be more pressure for change’, he points out. ‘And once we can all know what must be done, we can drive change at a transformative pace and on a massive scale.’

Opening Climate Intelligence to everyone, Iggy believes, is essential not only to catalysing lasting change but, in the immediate term, to complying with imminent regulation. ‘This is the granular level of detail that all companies will need in order to meet the requirements of upcoming mandatory climate risk disclosure rules’, he says.

In May, US President Biden ordered any business working with the federal government to disclose the risks they face from climate change. The UK government, meanwhile, intends the UK to become the first G20 country to make disclosures in line with the Task Force on Climate-related Financial Disclosures (TCFD) mandatory for large private and public companies.

Iggy believes meaningful climate disclosure must be standardised. He wants to see an agreed set of metrics, data and reporting frameworks that enable comparisons between different companies, and to build a network of shared climate intelligence. As he succinctly puts it, ‘we must be able to compare apples with apples’.

Businesses are on board; only 6% of businesses surveyed by Cervest were concerned that publicly sharing climate-risk data could have a negative financial impact.

Early movers will reap rewards as assets with lower climate risk are likely to enjoy insurance and financing benefits, while businesses will be able to scrutinise their partners’ exposure – and strengthen their supply chains.

Unsustainable, risky operations can be wound down, vulnerable assets adapted and new opportunities for investment revealed. And consumers will increasingly flock to more resilient providers in an increasingly volatile market.

A strategic window in Glasgow

It’s clear that climate change is not a zero-sum game. According to Iggy, ‘I can’t win if you lose. Our interests in this global economy are too intertwined.’ That shared dynamic can open up interesting opportunities – from investment and financing to new development.

Cervest is advocating at COP26 for open intelligence and standardisation, along with the very real need for a change in how companies think about climate change.

‘The interventions we take today will build resilience tomorrow’, Iggy tells us. ‘The best place to start is at an individual asset level.’ EarthScan helps businesses de-risk decisions for each asset, across multiple scenarios and timeframes – something that hasn’t been achievable until now.

That’s just the start, according to Iggy. ‘Ultimately, our vision is to build a resilient future for everyone on the planet’, he says. ‘Putting climate at the core of every business decision – from financial disclosure to supply chain management – can set us on that path today.’