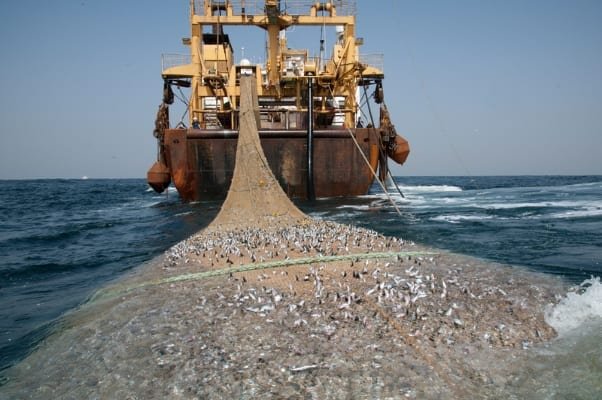 21 offshore protected areas are ‘unlikely’ to be progressing towards conservation targets. The remaining 47 lack any information on their progress.

This analysis was conducted by compiling each protected area’s ‘Progress Towards Conservation Targets’ as listed on the Joint Nature Conservation Committee’s MPA Site Information Centres, which hold up to date information on each of the UK’s offshore MPAs.

The report, which features a foreword by Chris Packham, examines the state of the UK’s network of offshore protected areas – those more than 12 nautical miles from the coast – and the destructive industrial fishing activity that continues to take place with alarming regularity inside them.

Greenpeace’s report focuses on offshore protected areas because the UK Government will have new powers to regulate fishing in offshore waters after Britain’s departure from the Common Fisheries Policy. Greenpeace’s ship, Esperanza, will set sail this month to bear witness to some of the destructive practices taking place in the UK’s failing protected areas.

‘The fact that just five of our offshore protected areas ‘may be’ progressing towards their conservation targets is a damning reflection on this government’s failure to properly protect the UK’s waters. Our government isn’t even sure if these five are actually making progress because all but one lack long-term site condition monitoring.

The five offshore MPAs which ‘may be’ progressing towards their conservation targets are Fulmar, North-East of Farnes Deep, North-West Orkney, Pisces Reef Complex and Swallow Sand.

The two MPAs which have some long-term site condition monitoring available are Skomer, Skokholm and the Seas off Pembrokeshire and North-West Orkney.

The 21 protected areas which are ‘unlikely’ to be progressing towards conservation targets include the Wyville Thomson Ridge, Offshore Overfalls and the Wight-Barfleur Reef, some of the MPAs worst affected by supertrawler operations in 2019.

‘This report highlights the urgent need to ban destructive fishing practices in our offshore marine protected areas, for the good of the marine ecosystems and the coastal communities that depend on them. As we prepare to leave the Common Fisheries Policy, the UK Government must lead by example and turn these paper parks into flourishing marine reserves that are safe from all forms of harmful, industrial fishing.’

Greenpeace UK is calling on the UK Government to ban supertrawlers and other destructive fishing vessels from fishing in UK MPAs as the first step towards creating a network of fully or highly protected marine areas, covering at least 30% of the UK’s waters by 2030, in which all industrial fishing activity is banned.

A Greenpeace petition calling for a ban has already gathered over 214,000 signatures. Over 80 MPs have signed a letter to the Environment Secretary calling for action on marine protection, and the Labour Party also supports a ban.

YouGov polling has shown that four in five people in the UK support a supertrawler ban.