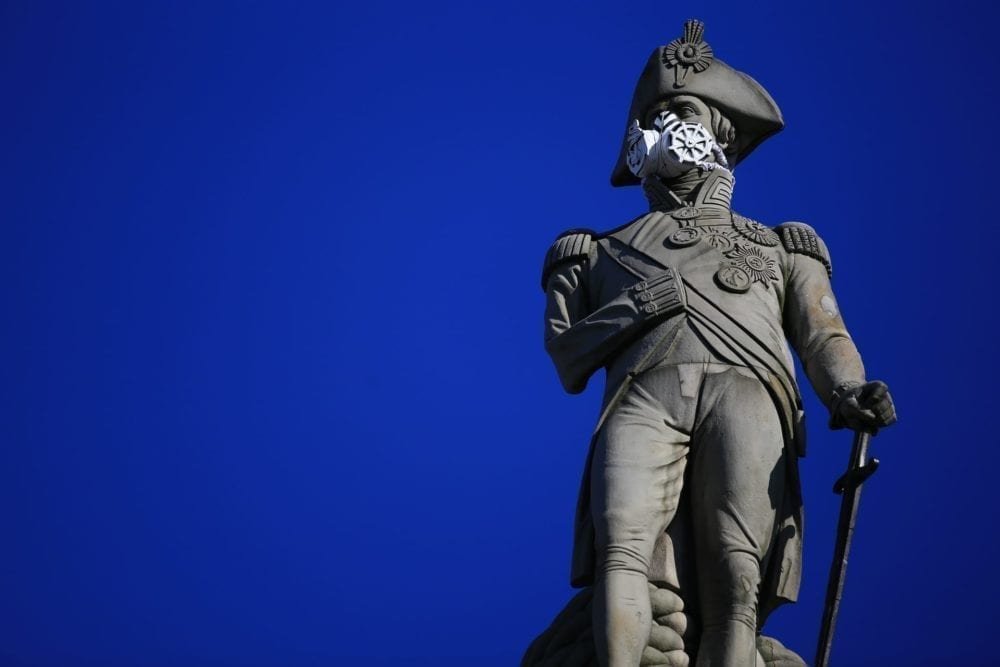 Earlier that morning, a separate Greenpeace team eluded security and climbed over the fence around the Houses of Parliament to put another mask on Oliver Cromwell’s statue.

Famous statues of Winston Churchill in Parliament Square, Queen Victoria opposite Buckingham Palace and Eros at Piccadilly Circus have also been given protection against London’s dirty air by environmental activists.

In all, 17 figures were seen wearing a mask, including some of London’s most famous statues. A complete list of the statues will be updated live here.

‘Monitoring shows that if these statutes were real people, many of them would often be breathing dangerous, illegal air. That’s why we’ve given them face masks.

‘Of course many millions of Londoners, including kids, are breathing that same air. Kitting everyone out with face masks is not the solution, instead we need to see real political action from the new mayor. We need a Clean Air Zone covering a large part of the city. Whoever wins the election has to stop the talk and start the action.’

Figures show that nearly 10,000 people die prematurely from air pollution in London every year. Greenpeace is calling for an expanded Clean Air Zone which would ensure that many more Londoners can have healthy lungs and clean air.

The current proposal for an Ultra Low Emissions Zone – to come into force in 2020 – only offers protection from dangerous air to residents and commuters in zone 1.

‘At schools across London children are being forced to breathe illegal, dangerous air. Londoners need greener and affordable public transport, along with air pollution alerts and an efficient and adequate system to measure air quality. The next mayor should begin a consultation on a Clean Air Zone immediately after the election.’

A total of 40,000 premature deaths are attributable to air pollution across the UK. Apart from London, Birmingham, Leeds, Liverpool, Cardiff and Edinburgh are among the cities likely to continue to breach legal limits of air pollution until at least 2020.

Click here to see a full list of the statues that have been fitted with gas masks by Greenpeace activists.