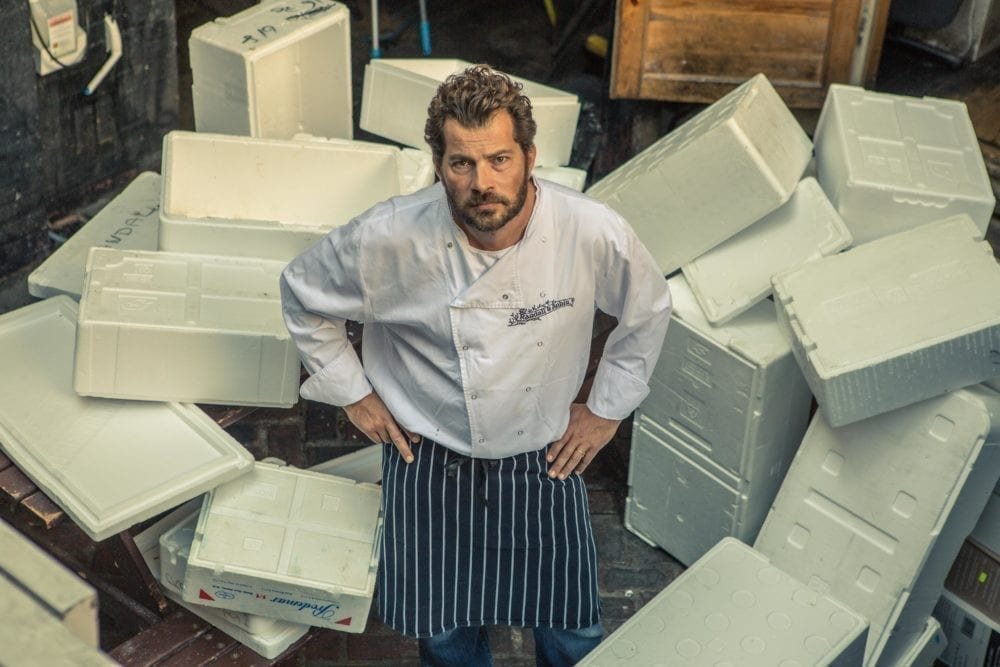 A group of influential chefs and food experts have written to the Mayor of London, Sadiq Khan, to urge him to outlaw polystyrene packaging.

‘As a chef committed to sustainability and food provenance, I am very concerned about the use of harmful packaging materials such as polystyrene throughout London. Not only are the mountains of polystyrene waste environmentally damaging and unsightly, it has also been shown to be harmful to health! We should be doing everything we can to get Londoners to use safer, environmentally friendly, recyclable packaging.’

Addressing the Mayor, the chefs claim that the current widespread use of polystyrene packaging contributes to London’s abysmal recycling performance, as demonstrated by the mountains of polystyrene waste that fill up the capital’s restaurants and streets. The chefs also express concerns about the ‘damaging’ impact that the non-biodegradable material has on the environment.

The perils of polystyrene

Polystyrene is extremely difficult and expensive to recycle, which means that millions of tonnes of the material end up in landfill sites every year.

Packaging made from polystyrene never biodegrades, pollutes waterways, and is manufactured from harmful chemicals like styrene that have been linked to cancer.

When the material pollutes waterways and oceans, it is ingested by fish, which makes the issue a particular concern to chefs like Ed Baines, who runs a well-respected seafood restaurant in Soho.

The call to action from Baines and his fellow chefs comes amid global pressure to address the huge environmental and health problems linked to the use of polystyrene packaging.

In late June, the San Francisco Board of Supervisors unanimously voted to ban many commonly used polystyrene products, including the food packaging, coffee cups and meat and fish trays used by restaurants and cafes. Similar bans have previously been enacted in cities such as New York, Seattle and Washington D.C.

Recyclable, paper-based alternatives to polystyrene such as solid board packaging have increasingly been adopted by chefs and suppliers throughout the UK and Europe seeking to improve their environmental performance, in anticipation of similar legislation to that seen in the US.

Sadiq Khan’s mayoral election manifesto emphasised his commitment to reducing London’s waste footprint, and outlined his promises to get the city on track to hit the target of 65% recycled waste by 2030.

The chefs are calling on Khan to live up to these promises and ‘take us one step closer to a zero waste, clean, green London’.

Soho is one of the liveliest and most exciting places in London and has been home to my restaurant for the last 18 years. Over this time, the area has got busier and more congested as new restaurants, bars and nightclubs open. Great as this is, there are some serious issues that Soho and its inhabitants have to contend with, and immense amounts of waste is one of them.

I see more waste in the streets of Soho than ever before. This waste is filling up the small amounts of space we have at the restaurants and spilling out on to the streets, every day. Much of this waste consists of excessive packaging that is not bio-degradable or recyclable. Perhaps the most obvious example of this is polystyrene which is delivered in its truck loads, delivering produce that could just as easily be packaged using more environmentally friendly materials.

The problems that come with polystyrene are not exclusive to London. It is estimated that globally around 80 billion polystyrene coffee cups are thrown away each year.

Polystyrene makes up a large amount of the debris in our oceans, seas and rivers contaminating fish stocks. Polystyrene acts like a sponge so picks up pollutants in the ocean which can then be ingested by fish. These are the same fish which end up on your plate!

Therefore, with my fellow signatories, I feel an obligation to take the lead from more progressive cities of the world such as San Francisco, Seattle and Washington DC and call on you as the Mayor of London to introduce a ban on this unsightly and environmentally damaging method of packaging.

In London, recycling rates are lower than the UK average. As an industry and as residents of bustling Soho, we should be doing everything we can to encourage London’s bars, hotels, restaurants and shops to re-use and recycle more.

This white foamy material might seem harmless, but it’s not – it is the scourge of Soho! This move could really make a difference so the signatories of this letter would encourage you and the rest of London to help support this cause, and take us one step closer to a zero waste, clean, green London!