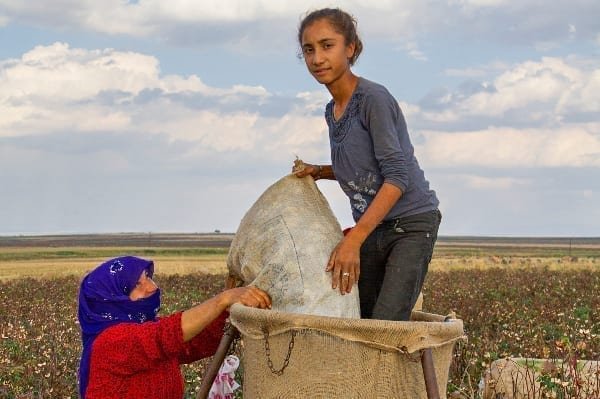 Most people never consider that what they wear started life on a farm, but over 50% of the clothes sold in the UK are made of cotton – most of which was grown by some of the 100 million cotton farmers across the globe. Every year 29 million tonnes of cotton are produced: the equivalent of 29 T-shirts for everyone on Earth.

Not all cotton is the same. Working with nature rather than fighting against it, the approach to organic cotton farming is fundamentally different from the damaging impact of conventionally produced cotton, which helps to make fashion more polluting than aviation and shipping combined.

Cotton is a notoriously thirsty crop that requires about 3% of all the water consumed globally. It takes an estimated 10,000 litres of water to produce 1kg of cotton, often in countries where access to clean water is already limited. In contrast, a peer-reviewed lifecycle analysis found that organic cotton uses 91% less water, requires 62% less energy and results in 46% less greenhouse gas emissions.

It all starts with the soil. Organic farmers plant crops that naturally fix the nitrogen from the atmosphere – they don’t rely on artificial nitrogen fertilisers that are damaging to soils and very energy intensive to produce. Organic soils have been demonstrated to be better at locking in carbon from the atmosphere, so farming organically has a lower impact on the ground as well as helping to mitigate climate change.

By using crop rotation – growing different crops each season – vibrant, healthy soils are created, meaning that crops can cope better in floods and droughts, something which is becoming even more important as climate change brings more extreme and unpredictable weather patterns.

Crop rotation also means that farmers grow a diverse range of crops alongside cotton. These other crops, grown without hazardous artificial sprays, can be a vital source of food that’s safe for farmers and their families to eat, or it can be sold to provide an income. As a result organic farming plays a crucial role in food security, something recognised by many NGOs, governments and the UN.

The failure of GM

The majority of conventionally grown cotton is genetically modified; despite the hype, GM has failed farmers around the world.

In India, the world’s largest producer of cotton, widespread crop failures have resulted from pest infestations because target pests have quickly become resistant to the GM crop, or other pests have attacked the cotton.

This has had a devastating impact on families and rural communities across the country and has led
to thousands of suicides.

People involved in non-organic cotton production are at risk from toxic chemicals in the field and in the factory. Around 14% of all insecticides sold globally are used on cotton, despite cotton only using 2.5% of the world’s arable land. Many are hazardous to humans and wildlife and applied by people who can’t afford equipment to protect themselves.

In factories workers can also be subject to horrendous working conditions, and toxic dyes and inks can seep into rivers and wells, poisoning drinking water and the natural environment.

In contrast, under the Global Organic Textile Standard (GOTS), factory workers are treated according to criteria based on International Labour Organisation conventions and only low-impact dyes and inks can be used, with any wastewater being treated before it is released.

If you want to reduce the impact of the global fashion industry, an easy step is to buy organic cotton – preferably carrying the GOTS logo. GOTS is the gold standard for organic textiles globally, so you can be sure you’re buying clothes made with at least 70% organic cotton, manufactured using low-impact dyes and inks and made in factories that meet strict social and environmental criteria.

The challenges posed by the global textile industry can appear daunting, but they can be overcome. Organic offers a positive solution that’s gathering momentum across the globe. By buying organic textiles – whether clothes, homeware or personal care products – you can know that you are part of a solution that offers a kinder, cleaner and better future for people and the planet.

Click here to help the Soil Association save the Earth from the ground up.