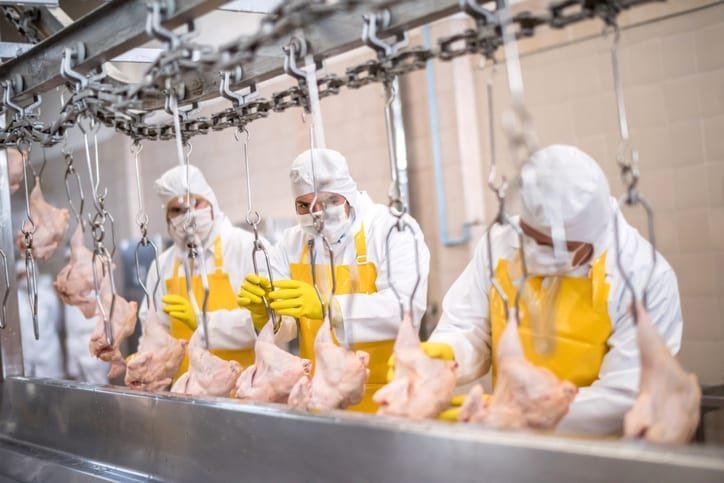 Urgent call for the permanent closure of meat processing plants, as their Covid-19 cases soar

The number of coronavirus cases might be falling, but concerns are being raised about the number of outbreaks in meat processing plants around the world.

An alarming number of meat processing plants are being forced to close due to outbreaks of Covid-19.

According to the Farm Animal Investment Risk and Return group (FAIRR), meat processing plants are at the centre of Covid-19 outbreaks worldwide.

‘The link between intensive animal farming and disease outbreak is clear. The Covid-19 pandemic is just one in a long line of zoonotic diseases which have been caused by the consumption and exploitation of animals, including SARS, MERS, HIV and Ebola – to name just a few. Now, meat processing plants are directly increasing the number of coronavirus cases and putting the wider population at risk.’

Previously, a review of livestock-related zoonotic diseases found that workers were 1,500 times more likely to be infected than the general population.

Animal welfare charity Viva! is calling for the permanent closure of meat processing plants as part of its ongoing campaign to end factory farming.

‘A number of theories have been suggested as to why meat processing plants are so badly affected. It could be a lack of social distancing due to the quantity of animals being processed and the speed of production lines, which is amplified by the poor working conditions and cold temperatures. Additionally, factory farming has been optimised to prioritise cost and efficiency at the expense of worker safety, animal welfare and biosecurity, allowing for plenty of opportunities for disease outbreak.’

Earlier this week, Germany was forced to re-impose strict lockdown measures after a surge in Covid-19 cases was reported in a number of meat processing plants.

More than 1,500 workers in the Rheda-Wiedenbrück plant, run by Tönnies (the largest meat processing firm in Germany), were confirmed to have contracted the virus as the country’s ‘R number’ jumped from one to almost three.

Several German abattoirs have also been affected, resulting in a number of closures.

Similar outbreaks have occurred across meat processing plants and slaughterhouses worldwide including in the US, the UK, Spain, Australia, Germany, Brazil and Canada.

In the UK, several large factories have closed after workers tested positive for Covid-19 – including the 2 Sisters Food Group (the UK’s main supplier of supermarket chicken), which closed its Anglesey plant after 58 people tested positive for the virus.

The Kober plant, which supplies bacon to ASDA and employs more than 500 people, also had to close. Another meat processing plant owned by ASDA in West Yorkshire became the third in 48 hours to confirm an outbreak after 150 workers fell ill.

Shockingly, over 25,000 cases of Covid-19 have been linked to meat packing facilities in the US, with at least 91 confirmed deaths. Over 8,500 cases have been reported at Tyson Foods alone – the world’s second largest processor of beef, pork and chicken, which amounts to more cases than either Australia or Finland.

‘The sad truth is that this pandemic could have been avoided. If government supported plant-based food initiatives and encouraged a transition from animal to arable farming, we could dramatically decrease disease outbreak. Factory farms kill over 70 billion animals a year – it’s big business and it’s coming back to bite us! We must take action to end our reliance on unsustainable animal agriculture and prevent future pandemics. It’s time to end factory farming and go vegan.’