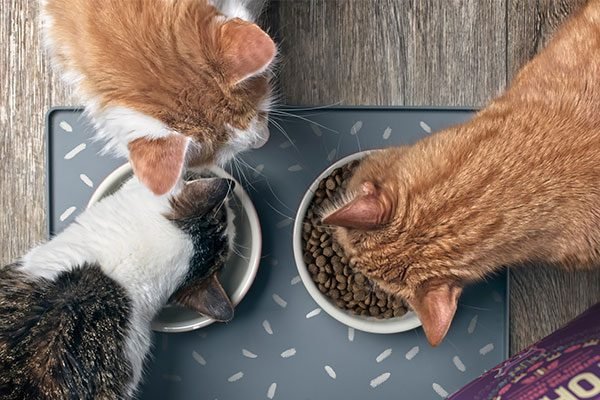 Since launching its trailblazing range of dog food and treats, Yora has gained a dedicated following of environmentally conscious pet owners.

The insect-based alternatives to meat are just as nutritious as chicken, fish or beef, but kinder on their pet’s stomach – and kinder to the planet.

Now the maker of ‘the world’s most sustainable pet food’ has launched its first cat food, containing the highest insect content of any available cat food.

Yora Complete for Adult Cats is created from a blend of insect flour derived from the larvae of the black soldier fly.

Insect protein is approved by the British Veterinary Association and is known to carry a wealth of nutritional benefits. It is highly digestible – much more so than conventional meats – and, compared with chicken or salmon, it exhibits strong antioxidant activity which can help reduce inflammation-related diseases.

Insect-based cat food also helps to slash your pet’s carbon footprint, which can be bigger than you might think. An average-sized cat produces 310kg of CO2e per year; scaled up, that means the UK’s cat population of 10.9 million has a footprint of over 3,379,000 tonnes of CO2e over a year.

‘Insects and bugs are a natural food source for wild and feral cats and most of us have seen our own cats chasing and munching on an insect or two in our homes or gardens’, said Claire Arrowsmith, an animal behaviour expert from The Pet Behaviour Centre, ‘which is why creating a cat food from insects is such a progressive and positive concept.’

Yora has been providing insect-based dog food for over two years, and wanted to make sure cat owners don’t miss out on the opportunity to reduce their pet’s environmental impact. In a recent survey, almost one-third (29%) of respondents claimed they think about the impact on the planet when choosing which food to buy for their cat.

‘Often the biggest hurdle for pet owners when switching to Yora is grappling with the idea of their pet eating insects’, says Yora MD Glenn Rankin. ‘However, we can see from the diets of wild and feral cats – as well as the behaviour of our own cats, who frequently chase and eat bugs – that insects form a regular part of the feline diet. In reality, insects are no less nutritious than traditional meat sources, giving cats the protein, vitamins and minerals they need to flourish – all while having a significantly smaller environmental impact.’

Should cats be vegan?

‘Our grubs are fed leftover vegetables that would otherwise go uneaten, and they only need a fraction of the water, land and energy of traditional meat farming’, adds Glenn. ‘That’s why vegan and vegetarian pet owners are choosing Yora as a healthier, more natural alternative to plant-based pet foods – which cannot fulfil many of the nutritional requirements for a feline diet.’

By using insect protein in its food, Yora ensures that cats are getting the protein they need while reducing their environmental impact. ‘As a lover of animals and the planet, I’m really enthused by the work that Yora is doing to reduce the environmental impact of pet food’, said TV vet Dr James Greenwood. ‘The nutritional value of the new cat food means that cat owners don’t have to compromise their cat’s health to make more sustainable choices.’

Moving from meat to insects

The environmental benefits of insect protein have become more widely understood in recent years, with Yora leading the way when it comes to education around insect pet food.

When compared with beef farming, Yora’s grubs generate 96% less greenhouse gas emissions and grow naturally at a rapid pace; they reach full size in just 14 days, meaning there’s no need for growth hormones or antibiotics. This insect ingredient makes Yora the lowest CO2-producing premium pet food in the world – it has an even lower CO2 pawprint than the leading vegan dog foods.

Spending more time at home over the last 18 months has in many cases also created a more pet-friendly lifestyle; UK pet ownership increased by 20% in 2020 as 3.2 million Brits became pet owners. Today there are an estimated 24 million pet cats and dogs in the UK.

A survey commissioned by Yora revealed that almost one in 10 Brits purchased a dog in the six months following the announcement of the first lockdown. That would mean over 6 million dogs were bought over that period.

Putting the new survey statistics through the Yora ‘carbon pawprint’ calculator, Yora found that the new wave of over 6 million lockdown dogs has a potential carbon footprint of 5 million tonnes of CO2 per year – and that’s just where their diet is concerned. To put that in context, over 2 million acres of forest would be required to absorb this amount of CO2 over a year.

Yora’s survey also found that changes in schedules and circumstances brought about by the nationwide lockdown has led one-third (32.9%) of existing dog owners to consider buying a second dog. If they all followed through, that would mean a further 6.2 million dogs living in our homes and contributing to our carbon footprints.

Feeding a medium-sized dog traditional meat-based food generates the same amount of carbon over its lifetime as taking 37 return flights from London to Barcelona. If every new lockdown dog were fed a diet of Yora for a year, the amount of CO2 saved would be around 4 million tonnes – that’s the equivalent amount of CO2 emitted by an average passenger vehicle taking almost 400,000 trips around the equator.

‘It’s clear from research into ecological pawprints of pet foods that insects offer a more sustainable source of protein for pets than traditional meat-based products’, said Dr Pim Martens, Professor of Sustainable Development at Maastricht University. ‘Not only are the carbon emissions associated with an insect-based diet lower, the amount of land (and likely water) required to produce foods using insect protein is lower than for foods made from chicken or beef.’

Yora has expanded its range to include food for cats and dogs of all shapes, sizes and ages – from puppies to seniors, large and small. Yora also has some tasty treats that would make a perfect gift for your pet this Christmas.

Yora’s bedtime biscuits, training treats and protein bars are packed with nutritious grubs and will satisfy even the fussiest dogs.

The protein bar is 50% insect and packed with nourishing botanicals including beetroot and spinach, which have high vitamin and mineral levels to aid recovery during and after walks. Insects are a highly digestible protein, providing a great energy boost, and the cold-pressed rapeseed oil gives dogs a glossy coat.

Yora’s Dreamers bedtime biscuits contain valerian root, chamomile and lemon balm to help get your dog ready for a good night’s sleep. The grub meal provides just the right amount of protein and British oats will ensure a full tummy until breakfast time. The Yora Rewards training treats are full of flavour and low allergen, providing a healthy treat to reward any deserving dog.

Yora’s sustainable credentials also extend to the company’s packaging, which is fully compostable, and all the treats are hand baked in sustainable, reclaimed wood-chip ovens.