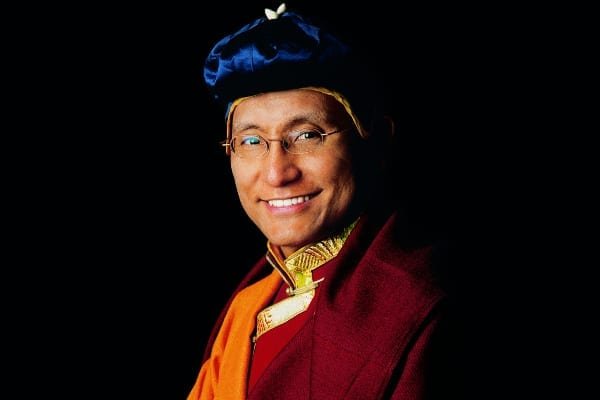 We seem to be in a transformational time of change; some call this the Golden Age or Age of Aquarius.

To me it’s an expansion in consciousness. People are becoming more aware of how they respond to situations, and are starting to question their lives and impacts. New films, books, campaigns and projects all over the world are stimulating conversations about a more conscious lifestyle, and creating a shift within each individual that is making them act and live differently.

I spoke to two people who I felt are living more consciously than most to find out what ‘being conscious’ means to them.

​His Holiness the Twelfth Gyalwang Drukpa has become a good friend ​over the years; we meet rarely, maybe once a year, but our connection is instant and flowing. He is one of the most humble and conscious people I know, so I wanted to ask his thoughts about how we might succeed in expanding consciousness in today’s society.

I was invited to an event that Jude Currivan and Lord Stone of Blackheath, whose work has included bringing mindfulness to the House of Lords and the House of Commons, had organised on the Whole World View. I’m very pleased to say the event encouraged me to collaborate with them both.

Dr Jude Currivan is a cosmologist, planetary healer, futurist, author and previously one of the UK’s most senior business women. Jude integrates leading-edge science, research into consciousness and universal wisdom teachings into a ‘wholeworld-view’. This underpins her work to enable transformational and emergent resolutions to collective planetary issues.

What does being conscious mean to you?

For me, ‘being’ conscious is about experiencing a sense of self, of what it’s like to be ‘me’. But I think it also implies a level of awareness – our level of responsiveness and empathy to others and the wider world. And how that awareness informs our choices and behaviours.

Why do you think society has evolved in a way that promotes a separate state?

The world seems materialistic and made up of separate objects – and mainstream science has maintained that indeed it is. Our increasing adherence to science and technology has validated the view that the appearance of the world is the reality – and collectively we’ve behaved accordingly. But an inner yearning for inclusion and acceptance has caused a deep schism in our psyche.

Leading-edge science now shows that our universe is fundamentally interconnected. Even more revolutionary, there’s increasingly compelling evidence that our ‘immaterial’ minds don’t somehow arise from our ‘material’ brains, but that universally, mind and matter are aspects of a deeper, non-physical and ultimately unified reality.

What is unity awareness as a way of being?

Unity awareness understands the ultimately unified nature of reality. But, and this is enormously important, unity expresses itself through radical diversity, not homogeneity; through unique individuation and experience and collective inclusivity. Coming together as a species – not only to understand, but vitally to experience and embody such unity awareness – would transform how we relate to ourselves, each other and our planetary home in every way we can imagine, and with love, not fear at its heart.

Some of your work has been about scientifically proving your own experiences; could you share some examples?

From the age of four, I’ve experienced numerous encounters with non-physical realities and supernormal phenomena which to me, for over 60 years since, are an integral and much valued part of my life. From premonitions and precognitive dreams to telepathic communications, angelic guidance and affirmative synchronicities, all of them are natural – though still extraordinary – aspects of unity awareness, and naturally fit within the ‘cosmic hologram’ of unified reality.

Do lots of people have unusual or supernatural experiences?

Polls consistently show that well over 50% of people have had such experiences and there’s an enormous body of scientific research to back this up. But mainstream science and the media generally disdain such experiences and evidence, which prevents people from sharing. I feel though that the dam is beginning to burst as more and more people are willing to share their experiences – and when they do, many others, I feel, will join them.

Can one individual change society?

I love the Margaret Mead quote: ‘Never doubt that a small group of thoughtful, committed citizens can change the world; indeed, it’s the only thing that ever has’. She said that before the Internet and social media, which have enabled individuals and small groups to have even greater potential influence. The question we face is: what change do we choose?

The Gyalwang Drukpa is an active environmentalist, educator and the spiritual head of the Drukpa Lineage, one of the main Buddhist schools of the Himalayas. It was founded by the great Indian saint Naropa (1016–1100CE) and has a thousand-year legacy in India. He applies ancient Buddhist philosophy to today’s problems and has millions of followers worldwide.

One of the Gyalwang Drukpa’s main focuses is environmental preservation and education, which put into action the core Buddhist principle that all beings are interconnected and interdependent. His mission is to promote universal harmony and inner peace by integrating the spiritual tenets of love and appreciation into daily life.

What does being conscious mean to you?

Sometimes we talk about ‘open-eyes meditation’. Being conscious and aware has to do with seeing what is going on, observing and reflecting on what is happening around you and through you. It is a basic recognition, and it can be developed for deeper understanding. These days, the concept and practice of ‘mindfulness’ is very popular; it actually means ‘being conscious’.

Why do you take part in environmental projects?

Since we are in the Himalayas, where many glaciers are melting, we are experiencing very bad environmental damage now. It’s really something frightening. It is not a joke, it is a matter of survival. We are having more and more strange weather disasters, like cloud bursts, sudden flash floods and avalanches. It is getting worse every year with global warming, and many people and many living beings – as well as plants – are dying from it. That is why we must do something urgently.

We broke the Guinness World Record for the most trees planted simultaneously, and the next year we broke our own record again. We did this in areas that are vulnerable to landslides and floods, so the roots can help keep the earth in place. The trees also stop the big rocks from tumbling down and crushing people and their homes. So many people have died from these rocks during storms. So we are doing it out of practicality, and out of urgency for saving lives.

What impact does controlling the mind have on yourself and the Earth?

Some basic awareness can help us to see what is really out there. It can help open our eyes to other beings that are affected by our actions. We have to slowly familiarise ourselves with Nature, with the reality of cause and effect, and have some understanding that we are interconnected. This can bring us to a much deeper sense of appreciation and compassion. If we all practiced appreciation and understanding, our lives would change a lot. There could be a true happiness there. When this happens, there is a very natural desire to help others because we understand that all things are impermanent and we are all connected.

What would a more natural state of being look like?

Living with some understanding about Nature helps us respect and appreciate one another. Not only each other, but each tree, plant, insect, the air… Everything. This is the beginning of happiness. Not a dull kind of spaciness, but a very pro-active kind of happiness. Where we naturally want to help other beings, with joyful effort.

What is the most important thing you can share in this moment on the journey of human evolution?

I started a movement in the Himalayas called ‘Live to Love’. That is what I hope people will feel: the power of acting from love. With genuine compassion, we can do something real in the community that benefits others. We can all stand up and live this way. Even just one person with Live to Love in their heart can make such a big difference. When we come together, the entire world can change, too.