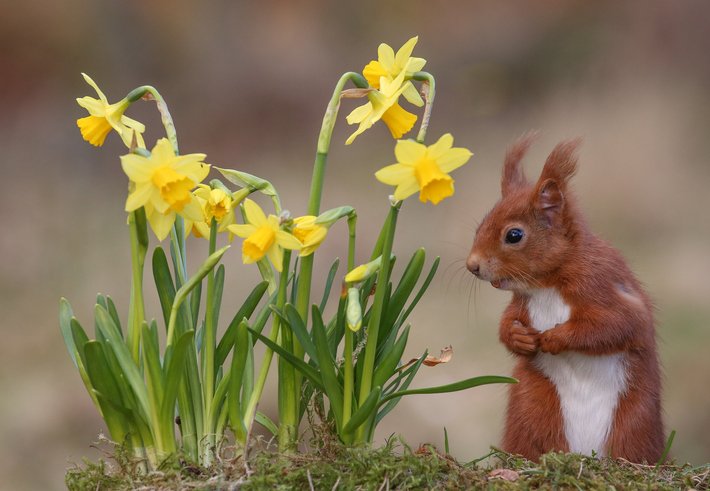 New research shows that by eating five portions of fruit and vegetables per day and reducing meat intake by around a third, people around the UK could help reverse the population decline of up to 536 endangered UK species.

The report was released yesterday (22 March) by the food policy think tank The Food Foundation.

The shift in diet could enable land currently used for livestock grazing to be freed up to plant the hedgerows and trees needed to support greater biodiversity.

This would increase habitable land by more than 10% for vulnerable species including red squirrels, harvest mice and house sparrows – and for pollinating insects, an area half the size of Wales.

The average person’s fruit and vegetable intake in the UK currently falls one portion short of the recommended five a day (400g).

According to The Food Foundation, if everyone across the UK were enabled to increase their vegetable intake by a handful a day, and reduce their red meat intake by 5.5g a day (around a burger less per week), up to 27% of land currently used for grazing livestock could be managed to generate greater biodiversity.

‘Eating nutritious food is important to keep you healthy, but as a collective, we could help to reverse the catastrophic decline of hundreds of UK species, and protect people and the planet. By incentivising sustainable farming methods and vegetable consumption, governments and businesses can make this a reality. Young people around the world are calling time on inaction. Our manifesto of Actions 4 Change is a challenge to governments and businesses to do the right thing.’

The research was revealed on the day that a set of the world’s leading youth food activists launched a manifesto of ‘Actions 4 Change’ as part of their Act4Food Act4Change campaign, which sets out the top 10 actions more than 100,000 young people across the world want governments and businesses to take in order to tackle hunger and protect the environment.

Backing the sustainable farming methods required to reverse biodiversity decline is one of the top three priorities of the manifesto, alongside ensuring everyone can afford healthy and nutritious food and making sure every child can eat a healthy and sustainable meal at school, college or nursery.

In order to ensure farmers are able to manage their land for biodiversity and bolster vegetable production, the Food Foundation is calling on the UK government to approve a strategy and package of support for British fruit and veg producers, and to expand land management schemes currently being trialled.

‘We are seeing the global movement of young people campaigning for a better food system growing by the day. The statistics are bleak: currently our global food system creates one third of all greenhouse gases and is the biggest driver of biodiversity loss. But the voices of young people are powerful, and their determination brings hope.

‘The UK government has a unique opportunity to rescue hundreds of vulnerable UK species, to reduce greenhouse gas emissions and to improve the health of millions of families by ensuring everybody can afford to eat their five a day and reduce their meat intake. Critical first steps include expanding the Healthy Start scheme to enable more people on low incomes to buy more fruit and veg, and approving a Good Food Bill that sets out a clear vision and plan to enable the horticulture sector to flourish.’

The UK is one of the most nature-depleted countries in the world, with only half of its biodiversity remaining.

41% of UK species have declined since the 1970s, with more than 40 million birds disappearing from UK skies.

In addition, unhealthy diets across England account for more than 10% of the country’s disease. One in five 10- to 11-year-olds has obesity.