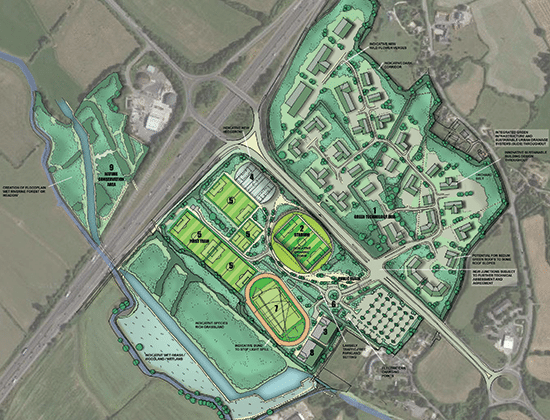 Ecotricity has submitted a planning application to Stroud District Council, outlining plans to build a £100m Eco Park across 100 acres of land straddling the A419 near Eastington.

50 acres of the proposed Eco Park, near junction 13 of the M5, would be dedicated to a state-of-the-art sporting facility including training pitches and a new 5,000-person stadium for Forest Green Rovers, which is owned by Ecotricity’s Dale Vince.

The other half of the park will contain a green technology business park capable of creating up to 4,000 jobs.

Ecotricity has also announced that the Eco Park will also feature a nature reserve area and a transport hub, as well as filling in a key part of the missing mile of the Stroudwater canal.

‘It will be a place where green businesses and technology companies will come together and share ideas, a real focal point of creativity and innovation for the area – and a part of the green industrial revolution that’s beginning to take off around the world.’

The proposal is proving controversial: some question how environmentally friendly such a large development would be and others are concerned about moving Forest Green Rovers from Nailsworth, which has been the football team’s home for over a century.

A petition on change.org expresses local concerns about the plans for Eastington’s ‘perfectly green fields’. It states that, as well as adding to congestion and noise pollution in the area, the development will create an ‘unsightly feature in… a beautiful place’.

‘There were some concerns too, of course – and we’ve taken those on board and addressed them in our application.

‘Probably the most significant of those issues was traffic congestion. We know there’s already a congestion issue at Junction 13, so we commissioned an independent traffic assessment – and the suggestion coming out of that is to dual the road from junction 13 to the next roundabout, which would make the traffic situation better for everyone.’

As well as conducting drop-in sessions and stakeholder meetings, Ecotricity commissioned independent assessments of the key issues and undertook environmental studies before submitting the outline application.

‘We’re really pleased to get to this stage – it’s been a very busy six months, talking to a lot of people and identifying all the key issues.

‘We’ve had a fantastic response from across the District, particularly during the drop-in sessions – 75% of people who gave us feedback at those sessions supported the plans, which is great.

‘Many people are excited about the prospect of new businesses coming to Gloucestershire, new jobs being created, new sports facilities being available, and a new stadium for Forest Green Rovers.’

Click here to find out more about Ecotricity’s Eco Park.