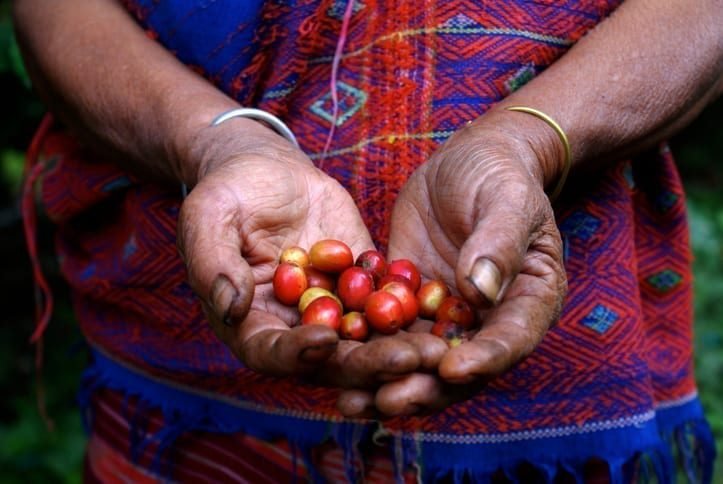 To celebrate the Fairtrade Mark’s 25th birthday, and to mark International Coffee Day, the charity behind the label is today (01 Oct) exposing price as an ‘elephant in the room’ that’s fuelling poverty.

The charity is calling on industries to do more as volatile commodity prices of coffee and other goods such as cocoa, tea and bananas are trapping people in poverty.

‘Conventional trade is still stacked against the majority of farmers and workers in the Global South, who are working in gruelling conditions, on the front line of a climate crisis that is destroying their livelihoods and trapping them in cycles of debt they can’t get out of.

‘This is not a warning about a future calamity, today in many communities around the world farmers cannot feed their families.

‘If farming has a future more businesses need to work with us and take action to address the deeply unfair trading relationships that persist across all commodities. The elephant in the room is price: I’m proud of Fairtrade’s achievements but we need more farmers and workers to be fairly recompensed for their work so they can live dignified lives.’

Farmers selling to the Fairtrade market have some protection from the price crisis in many commodities.

Over the past two years the market price for arabica coffee (on average $1 per pound of beans) has been below the Fairtrade Minimum Price for coffee ($1.40).

Farmers can use the additional Fairtrade Premium investment of $0.20/lb for investments in their businesses, in organic farming (commanding $1.70/lb) or in social community projects.

With better and stable prices for farmers, it is possible for coffee to be a viable and sustainable livelihood.

Coffee and a ‘humanitarian crisis’

Fairtrade was established as a reaction to the coffee crisis in 1992. A group of committed
campaigners were outraged by the rock bottom prices paid to coffee farmers toiling daily and barely earning enough for a living income.

Coffee is the world’s second most traded commodity after oil, and the global coffee business is worth over $200 billion a year. Consumers in many wealthy countries are willing to pay more than $3 for their daily fix.

25 years ago farmers were receiving an average of $2.04/lb. Coffee prices on the international markets are at their lowest ever in real terms; in May this year arabica beans were trading at 86 cents/lb on the International Commodities Exchange (ICE) futures – the lowest since 2004.

In the period 2012-2017, coffee consumption and production increased by an average of 2% per year. If this pace of growth continues, the current system of coffee production will not be able to meet increasing demand in the coming decades.

The ICO has said that coffee farmers have often been operating at a loss between 2006 and 2016 and that coffee does not provide a viable livelihood. Ultimately, Fairtrade agrees with the World Coffee Producers Forum that this is a ‘humanitarian crisis’ that needs to be addressed, with 25 million smallholder coffee farmers’ livelihoods at stake.

Click here to find out more about Fairtrade’s 25th anniversary.