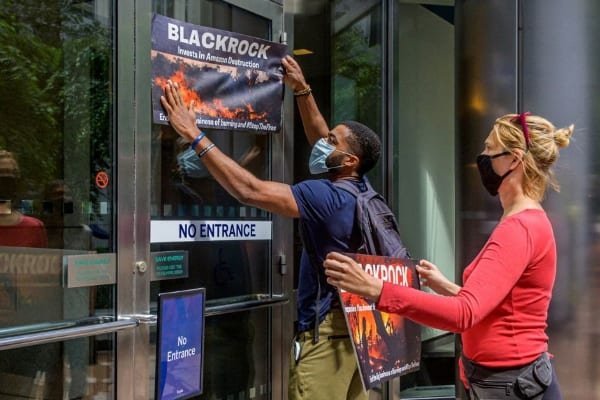 Despite positioning itself as a financial firm that leads on climate earlier this year, BlackRock continues to be a major financial investor fuelling the Amazon fires.

Analysis from Amazon Watch reveals that BlackRock is a top investor in deforestation-risk commodities around the world, including in the Amazon.

Last week, climate activists in San Francisco and New York took matters into their own hands in a direct action that replaced BlackRock’s sleek branding with images of deforestation and destructive fires across the Brazilian Amazon.

The removable decals were a part of a demonstration inspired by the Rainforest Fires Week of Action, a week-long series of direct and online events coordinated by a number of environmental groups across the country.

The demonstration targeted major financial institutions and corporations profiting off the deforestation commodities that are destroying major rainforests around the world, from Indonesia to the Amazon.

‘We have to send this clear message to BlackRock and its CEO, Larry Fink: rhetoric won’t prevent more record-breaking California wildfires, Hurricane Lauras, or Amazon razing, only action will. Unfortunately, while millions across the globe are feeling the heat of the climate emergency, Fink and BlackRock are fuelling the fire with the hundreds of billions they invest in deforestation. That has to end.’

The fate of the Amazon is at a major turning point. Due to an error with a NASA satellite causing delays in reporting data, Alberto Setzer, a senior scientist involved in producing the official fire data at Brazil’s National Institute for Space Research (Inpe), says that recent data and news reports citing a 5% decrease in fires in the Brazilian Amazon are incorrect.

Setzer estimates that once the full set of data is analysed, it will show that fires increased by between 1% and 2% in August 2020 compared with August 2019.

This wold make August 2020 the worst burning season in a decade, according to an exclusive article from Reuters.

‘According to MAAP, since August 30th of this year, over 1.1 million acres (453,000 hectares) of recently deforested areas have burned in the Brazilian Amazon. Given the urgency of what’s happening in the Amazon today, it’s encouraging to see that activists are turning out from coast to coast to hold BlackRock accountable for its contributions to climate change and rainforest destruction.’