For the love of goats 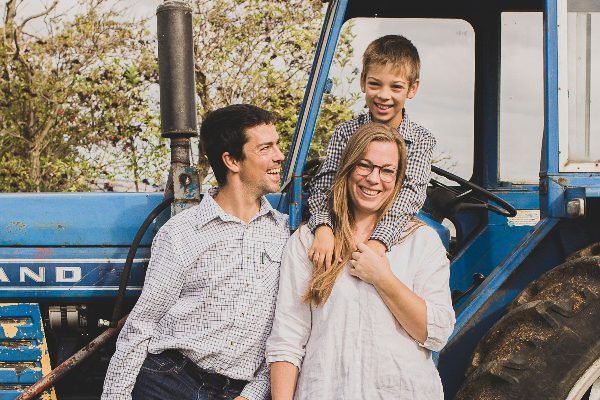 When Ian and Lauren Horton got married, the usual exchange of vows was accompanied by a less tangible commitment to live a more sustainable life together.

At the time it was unclear how this dream would unfold, but as a low-income household – and avid fans of The Good Life – they gifted each other four hens and bought Ganders Farm at auction.

Eight years later Ian and Lauren have achieved self-sufficiency through a thriving carbon-neutral business built around wildlife conservation – and goats.

‘When we first bought the farm we had a house cow and a calf’, Lauren tells us. ‘She gave us plenty of milk to use in the house, but after a year or two we found that having cattle at Ganders Farm just was not right for the land.’

In the search for alternative reliable sources of milk, the conversation soon turned to goats; they are light on the ground and a single nanny could provide more than enough milk for all the dairy needs of Ian, Lauren and their son, William.

‘We started out with two and soon fell in love with their personalities and cheek, so many more followed’, Lauren tells us. The family also noticed health improvements after the switch from cow’s milk to goat’s milk, which contains less lactose and is easier for the body to digest. ‘I found that many of my tummy troubles were so much better after the switch’, Lauren reveals.

Ganders Farm is a micro-dairy; there is a small number of milking goats, and the methods used are very different from the year-round lighting, feed and production you’d find on an intensive dairy farm.

‘We feed our girls very differently form the larger commercial enterprises’, Lauren tells us, ‘so our milk is also very different. The taste is much less earthy and tangy than milk we have bought from elsewhere.’

Operating as a micro-dairy also means yields are much lower; each millilitre is precious and the milk is used in a wide variety of ways.

At the height of milk production in the spring and summer, Ian and Lauren produce Ganders Goat Ice Cream, an all-natural alternative to traditional ice cream that has half the calories and half the fat.

The ice cream is sold directly to customers and at independent retailers, with food miles kept to a minimum; the distance between the milking parlour and the production room is just five metres.

The flavours are sourced locally where possible, with many ingredients picked straight from the hedgerows at Ganders Farm. Options range from Nettle, Apple with a Blackberry Ripple and Gooseberry & Elderflower to the more traditional Vanilla, Strawberry and Chocolate – all wrapped in compostable packaging.

Any milk left over is used to make Ganders Goat Milk Soap, which has great moisturising properties and is extremely gentle on the skin, making it a good option for anyone with sensitivities or skin conditions. Like the ice cream, the soap is made using local ingredients, such as rapeseed oil from less than 12 miles away.

‘We are a seasonal micro-dairy’, Lauren explains. ‘The girls get time off in late autumn and winter; we don’t milk them at all and they have a very well-deserved rest. Through careful production our whole product range is always available.’

For Lauren and Ian, self-sufficiency and wildlife conservation are not a balancing act, they are a partnership.

At Ganders Farm, ‘wildlife friendly’ means working the land with a conscious effort to protect, nurture and improve – the visible wildlife and also the invisible network of life in the soil.

‘Those grass roots and the soil are key to the health of everything’, Lauren explains. ‘Looking after the farm’s biodiversity reduces inputs and, given time and patience, also increases output.’

Lauren and Ian have been following this approach for years and see the benefits all round the farm. One of many examples is their decision not to intervene with a profusion of docks; they chose patience over chemicals and watched as dock beetle numbers increased and took care of the problem.

In turn, birds came and feasted on the beetles.‘Small adaptions provide long-lasting effects’, Lauren tells us. ‘Increased numbers of biodiversity Action Plan (BAP) species have been recorded as increasing on our farm, which we can only put down to the practices we have implemented.’

Ganders Farm is now carbon neutral through on-farm practices; Ian and Lauren haven’t bought carbon credits, they have calculated all the carbon they have ever produced at the farm and locked the equivalent amount away on their own land.

As first-time farmers with no previous knowledge of farming techniques, Lauren and Ian admit this has been an uphill journey. ‘Ganders Goat would not be possible without the goats and all the care, love, learning and attention we have put into our business’, Lauren says, ‘and all our loyal customers who return year on year.’