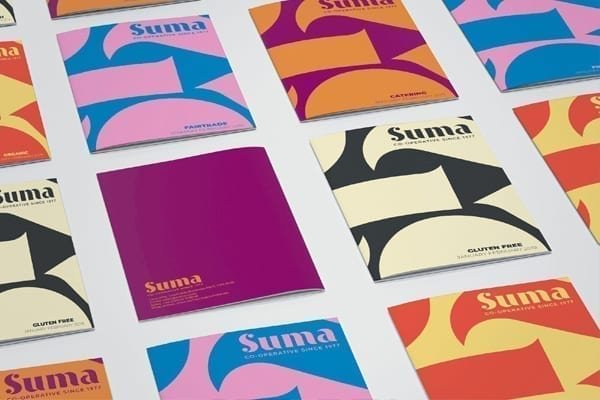 Suma has shown how democracy, equality, integrity and compassion can succeed in business

Suma has always been two things: fair and vegetarian. Those decisions were made over 40 years ago by a group of liberally minded people who wanted to change the world.

The cooperative was built serving wholefood stores and food co-ops when the market was small and new to the UK. It delivered everything from fruit and flour to toilet roll and tinned tomatoes, and has a number of industry firsts – such as recycled loo roll and vegan convenience foods – under its belt.

Suma is also the largest equal pay cooperative in Europe, with a staff body of 190 members. Since its birth as a co-op in 1977, the ‘ordinary people’ that work there have all taken home the same salary.

‘The world is changing’

The founding principles of equality and integrity may have been ahead of their time, but today, as other businesses begin to address their gender pay gap and scrabble to supply the demand for meat-free products, Suma’s bang on the money.

From its HQ in Elland, near Halifax in West Yorkshire, Suma helped to found a progressive movement that’s now considered mainstream. A 2018 report discovered that one in eight Britons are now vegetarian or vegan, and a further 21% claim to be flexitarian, meaning they are vegetarian most of the time but eat meat every once in a while. This means a whopping third of UK consumers have deliberately reduced the amount of meat they eat.

By delivering vegetarian, sustainable and responsibly sourced products to businesses and communities across the UK and around the world, Suma turned over £55m in 2018. It has over 7,000 vegetarian products which it supplies to the likes of the Co-op plus a host of restaurants and distributors. It also exports to 40 different countries including Cyprus, Singapore and Spain – something for which it won the 2017 Queen’s Award for Enterprise in International Trade.

‘The world is changing’, says Sheree Hatton, one of Suma’s worker members. ‘There is a growing interest in meat-free diets and fairer business practices, things that have been at our heart for over 40 years. Suma’s never been more of the moment.’

As a worker co-op, the business is owned and run by the people who work there. There are no bosses or shareholders: the employees set the direction of the business. Everyone takes responsibility and has an equal say in what happens, and does a range of jobs each week – from driving the trucks and cooking to doing the accounts.

Click here to find out why the Suma’s Ecoleaf dishwasher tablets are a MyGreenPod.com Hero

Suma staff are also given paid time to plant trees; in partnership with Treesponsibility, which works with local schools and other groups, Suma plants around 5,300 trees each year to offset the carbon produced by its fleet of delivery trucks. Native species are planted to lock carbon into the soil; they also provide a sustainable resource, as the plantation is coppiced as it matures.

The nascent woodlands planted already constitute a carbon sink capable of absorbing several thousand tonnes of CO2 over the next 50 years.

Suma is part of a bigger movement for workplace democracy. There are around 7,000 co-ops in the UK – such as wholefood co-op Green City in Glasgow – and three million worldwide, including the Spanish worker-owned giant Mondragon.

They all work in different ways and do different things, but have one thing in common: they are owned and run by the people most affected by what the organisation does.

Big ideas need to stand out, and in January Suma revealed a new look for the business – including its fleet of 22 trucks and 1,000 own-brand products.

The rebrand, which is expected to take two years, is as bold as Suma’s thinking and as colourful as the people who make up the co-op. It’s clean but organic – elegant but not fussy.
‘The way we look is changing’, says Suma member Nathalie Spencer, ‘but what we stand for is staying the same. We want our new look to be as bold as our people and as inspiring as our customers.’